The pursuit of leaders: Bolshunov and Nepryaeva won medals at the second stage of the Tour de Ski

In Lenzerheide, Switzerland, races were held from a separate start as part of the second stage of the Tour de Ski. Alexander Bolshunov became the silver medalist and climbed to fourth place in the overall standings, reducing the gap from Johannes Klebo to 44 seconds. In the women's competition, Natalya Nepryaeva took bronze and rose to the third intermediate position. 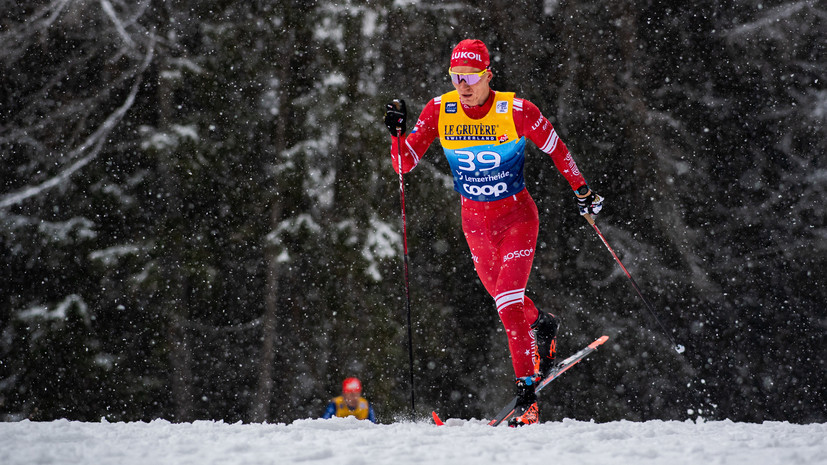 At the second stage of the Tour de Ski, the participants of the stage race were expected to race from a separate start - 15 km for men and 10 km for women.

It was necessary to cover this distance in a classic move, which the organizers of the World Cup this season "forgot" for a whole month - the last time the skating style on the track was banned during the November stage in Ruka.

On Wednesday, December 29, the weather in Lenzerheide was still uncomfortable for skiers.

During the women's race, which opened the program of the day, heavy snow fell, due to which even visibility was imperfect, not to mention the condition of the track.

Russian woman Anastasia Rygalina had to play the role of a ski-track stacker - she was the first to go to the start and pave the way for those who ran behind.

The cut leaders emerged quite early.

Swedes Frida Karlsson and Ebba Andersson, even at the 2.4 km mark, where bonuses were distributed in the overall standings, won at least seven seconds from other girls.

After that, their paths parted.

Karlsson, who won a similar race in Ruka, slowed down and let her compatriot go ahead, but at the same time she did not give her second place to anyone.

And there were enough applicants for him.

One of them was Tatiana Sorina.

Her acceleration was not the most noticeable, but after the bonus cut-off, she rose from the second ten to third place.

The Russian woman held out in the top three until the middle of the distance, after which Finnish Christa Pärmyakoski and Austrian Teresa Stadlober, and then Yulia Stupak, began to press her.

Taking into account the fact that the Swedes were still competing for the first two places, it became already difficult to fight for a medal.

The situation changed when the last favorites started.

Kerttu Niskanen, whose brother Iivo is one of the strongest "classics" in the world, and Natalya Nepryaeva were able to break into the group of leaders.

Finka rushed to run on schedule Andersson, whose leadership still seemed unshakable, and the Russian woman aimed at the result of Karlsson.

Both skiers perfectly knew the pace of their rivals and could use it.

And both achieved their goals, making a splash. Niskanen, according to the results of three quarters of the distance, was behind Andersson, but in the end she won over 18 seconds, although at that moment the snow was still mercilessly falling asleep on the track. Nepryaeva also stepped behind her rivals for a while, before rolling to the finish line in full force. As a result, she showed the third result, winning 3.5 seconds over Pärmäkoski. Nepryaeva's bronze medal became the first personal award for Russian skiers this season. The seventh place is Stupak and the eighth place for Sorina is also a success.

At the same time, it was much more important how the skiers positioned themselves in the overall Tour de Ski standings.

Nepryaeva, from the 12th position, rose immediately to third, losing 35 seconds to Niskanen and only six to last year's champion Jessica Diggins from the United States.

The bonus seconds for the second place in the 2.4 km cut-off also helped the Russian woman to get so high.

Sorina moved up to tenth place and came after Stupak, for whom this stage of the Tour de Ski was the last, so Tatiana will take her place.

Half an hour after the finish of the women's race, the men's race began.

Alexander Bolshunov went the distance between his two main rivals - Finn Iivo Niskanen, who had already won this discipline at the end of November, and the leader of the Tour de Ski, Norwegian Johannes Klebo.

A Russian could be guided by the time of one, but at the same time he felt someone else's breath behind him.

By the mark of 5.8 km, Niskanen and Bolshunov settled on the first two lines.

By that time, Klebo did not yet pose a great danger to them, unlike his many compatriots.

Among other Russians, Ivan Yakimushkin, Alexei Chervotkin and Denis Spitsov, for whom there was a place in the top ten, dispersed well.

Having passed the middle of the route, Klebo joined the struggle, trying to catch up with Bolshunov.

As a result, he climbed to an intermediate third place.

At the same time, the Russian seemed to have foreseen the acceleration of the Norwegian and himself went through the second half a little more powerful.

He even increased his lead over the World Cup leader, so they were 15 seconds apart at the finish.

At the same time, there was no talk about the fight with Niskanen - the Finn competed with himself and never in the last 10 km was worried about his first place.

The last troublemaker in this cut was the Norwegian Paul Golberg.

Starting quite late, he joined in the pursuit of Klebo and from the middle of the distance became a real threat to his hit on the podium.

As a result, one Norwegian took the bronze from another.

Taking into account the fact that Bolshunov was higher than Klebo and in the bonus cutoff, the race was very successful for the Russian.

In the overall Tour de Ski standings, he reduced the gap to the Norwegian to 44 seconds and moved up to fourth place.

Between them are Golberg and Niskanen.

Yakimushkin and Spitsov climbed to the top ten, which they were far from due to an unsuccessful sprint.

The participants of the stage race will next gather on December 31 in Oberstdorf to compete for medals in the mass starts.