With a new headquarters and sports director: what is known about Vanoli's arrival at Spartak instead of Vitoria

The head coach of Spartak Moscow is likely to be appointed by the end of the week. The club has already officially announced the termination of the agreement with Rui Vitoria, with whom four assistants left the coaching staff. The place of the Portuguese should be taken by the Italian Paolo Vanoli, who was previously assistant to Antonio Conte. Marco Donadel, who worked with Fiorentina, is expected to be his assistant, and the functions of the club's sports director will probably be assigned to PSG scout Luca Cattani. According to sources, the appointment should be announced after the meeting of the board of directors of Spartak. 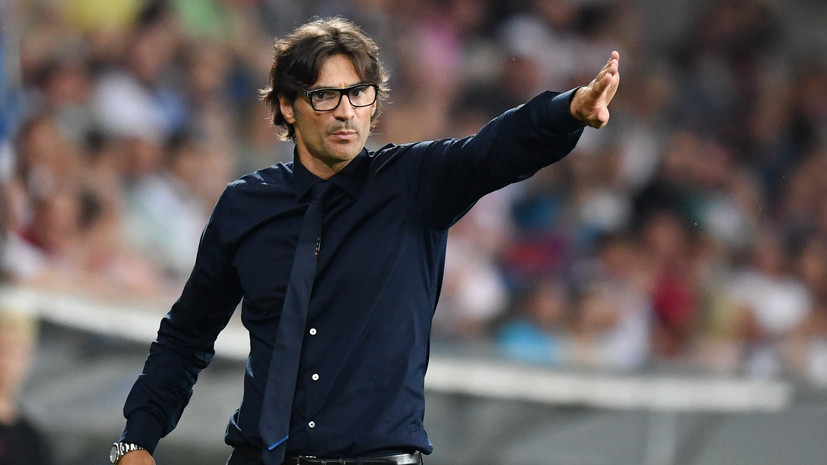 In the near future, the club should have a new head coach and his staff, as well as a sports director.

Apparently, the ten-time Russian champions will be mentored by Paolo Vanoli, who previously worked as an assistant to Antonio Conte at Chelsea, Inter and the Italian national team.

Rumors that the 49-year-old specialist could lead the red and white instead of Rui Vitoria appeared in November.

Then journalist Nobel Arustamyan noted that the Italian, for the sake of an independent coaching career, refused to follow Conte to Tottenham and began negotiations with the management of the Moscow club.

It was reported that a specialist can get a position during the winter break.

All this time, Vitoria continued to work and achieve conflicting results with Spartak. On the one hand, the Portuguese mentor was able to achieve success in the Europa League: to take first place in a difficult group with Napoli, Leicester and Legia and make his way directly to the 1/8 finals. On the other hand, his players dropped to ninth place in the Russian Premier League and only at times looked decent. Since the first rumors about the possible arrival of Vanoli appeared, Spartak scored five points in five matches, and in the last round before the winter break they lost to Sochi with a score of 0: 3.

In early December, many Russian insiders and the media began to actively dismiss Vitoria and write about the appointment of Vanoli immediately after the end of the autumn part of the season. According to them, this should happen after the meeting of the board of directors of Spartak. At the same time, the popularity of the Portuguese among fans has grown due to the team's entry into the playoffs of the Europa League. When Vitoria took the players to dinner in Sochi, fans came to the restaurant with a banner “Rui is our coach”.

According to Sport-Express, the replacement of Vitoria with Vanoli should take place in the near future.

It is reported that the Italian coach will arrive in Moscow from Verona on December 15 and will stay in the capital for several days.

According to some reports, on the 17th he will be officially presented as the new coach of Spartak.

According to "Championship", citing sources familiar with the situation, the club has already hired a translator from Italian Vanoli.

It was sports journalist Vladimir Irincheev.

Also, there was information about who can enter the coaching staff of Vanoli.

It is reported that one of his assistants will be Marco Donadel.

Until this summer, he was part of the Fiorentina coaching staff, for which the former Spartak player Alexander Kokorin stands.

According to the portal Fiorentina.it, the 38-year-old Italian traveled to Moscow on December 14.

Luca Cattani should become another new face in Spartak. The Paris Saint-Germain scout is being considered for the post of sports director of the Moscow club instead of Dmitry Popov, who retired in the summer. Initially it was reported that Cattani refused to move from France to Russia. But later he gave his consent when it became clear that the team will be led by Vanoli. According to Italian insider Nicolo Schira, Spartak will sign a three-year contract with Cattani. On December 13, the general director of the red-and-white Yevgeny Melezhikov said: "There is more or less certainty about the sports director."

Despite the fact that in the media the dismissal of Vitoria and the appointment of Vanoli were presented as fait accompli, on the morning of December 15, this process was not completed.

"Match TV", citing a source, reported that the Portuguese allegedly refuses to leave the club and sign the documents necessary for this, in connection with which Vanoli cannot yet formally take the position.

Later, RB Sport clarified that the delay was not connected with Vitoria's refusal to leave, but with an unresolved issue about the timing of the payment of the penalty.

The Portuguese must receive € 2 million, and the club agrees to pay this amount, but only in installments for some time.

The coach's side insisted on getting the full amount due as soon as possible.

However, in the evening, Vitoria's departure was confirmed.

Spartak announced that the separation had taken place by mutual agreement.

“The Portuguese will forever remain in Spartak's history as the coach who took the team to the Europa League playoffs from the first place in the group.

The club thanks Rui for this achievement.

At the same time, the red-and-white need a new vector to correct the standings in the Russian championship.

The need for changes forced the parties to search for a solution that would suit everyone and benefit Spartak, the club stressed.