Cross. That was what the Swedish ladies stood for in Hochfilzen's women's relay. They were over a minute ahead of the second best team, when they took the season's first relay victory. This despite the fact that Hanna Öberg was forced to go to a penalty round. 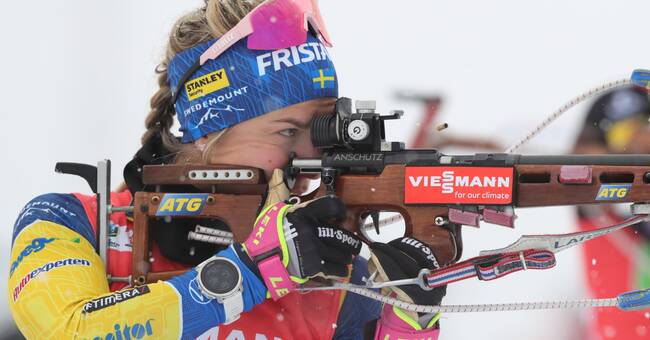 Today came the first of this Olympic season.

The Swedish team, with Linn Persson, Anna Magnusson, Elvira Öberg and Hanna Öberg were overwhelmingly superior in the Austrian Hochfilzen.

Linn Persson shot full on an impressive first stretch, and switched to the lead.

On the second leg, Anna Magnusson also made a good effort, and switched over as second, 7.7 seconds behind France.

And on the third leg, there was never any talk.

Elvira Öberg once again had an impressive ride.

When she then "only" needed two extra shots in total, she really pulled away from the rest of the field.

She was over 48 seconds faster than the second best skier on the stage, and when Hanna Öberg went out on the final distance, she had over one and a half minutes to spare in Austria in second place.

An extra shot at Hanna Öberg's horizontal shooting would not have any significance, they probably thought.

But there was still a certain tension, when she blocked four shots on the standing shooter - and she needed to go out on a penalty round.

- There she became trembling.

Victory by half a minute

But the lead was still so big, so when she left the embankment she still had 36 seconds on Russia's Kristina Reztsova.

Thus, Hanna Öberg, despite the crash on the embankment, was able to parade into goal.

This was Sweden's fifth victory ever in the women's relay in the biathlon world cup.