Salikhov's salvation, Djikia's faith and praise from Carrera: what was discussed after Spartak's victory over Legia in the Europa League

Spartak's exit to the 1/8 finals of the Europa League from the first place in the group is a phenomenal result, said former head coach of Muscovites Massimo Carrera after defeating Legia. According to the captain of the red-and-white Georgiy Dzhikia, he was sure that Alexander Selikhov would reflect the penalty in the last minutes of the match. According to the ex-head coach of Lokomotiv Yuri Semin, the capital's team in European competitions recalled its glorious past and demonstrated the corporate victorious spirit of the times of Oleg Romantsev and Konstantin Beskov. 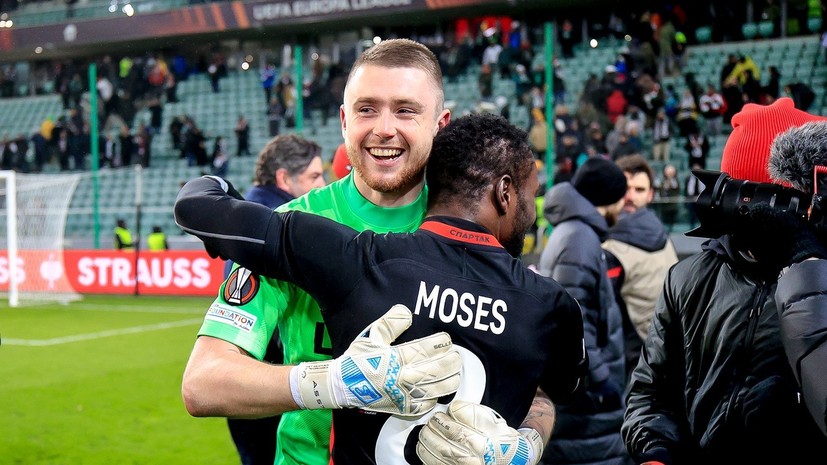 Moscow "Spartak" created a small miracle for Russian fans, reaching the playoffs of the Europa League from the first place in the group.

Thus, the red and white repeated their own achievement of the 1995/96 season, when the team led by Oleg Romantsev in the Champions League left behind the same Legia, Blackburn and Rosenborg.

This time, the opponents turned out to be much more serious: the strong Italian Napoli, which took second place in Serie A in 2019, the 2015/16 Premier League winner Leicester and the reigning Polish champion Legia.

By the way, the Warsaw people have historically been an extremely inconvenient opponent for Spartak.

Before the reporting match, the red and white in five meetings only twice turned out to be stronger than the opponent.

It is not surprising that after the draw, the national team was predicted, at best, third place and entry into the League of Conferences.

Judging by the jubilation of the Spartak players in the locker room at the Meiski stadium named after Marshal Jozef Pilsudski after the victory over Legia, it was hard to believe in the victory in the group and himself.

Former head coach of Muscovites Massimo Carrera called the team's reaching the 1/8 finals from first place in the quartet a huge achievement that should not be underestimated.

I don’t know what will happen next.

But getting out of the group, where there are such big teams as Napoli and Leicester, is a very big achievement.

Congratulations to all fans on your victory! "

- said Carrera in an interview with "Championship".

At the same time, Spartak immediately made it to the 1/8 finals of the LE, while the Italian Atalanta, as well as the Spanish Barcelona and Sevilla, which took third places in their groups in the Champions League, start from the 1/16 finals, like Zenit.

In addition, it was the red and white ones that have brought Russia the most points to the UEFA coefficient table at the moment, leaving St. Petersburg and Lokomotiv behind.

The ten-time champions of the country won three victories: two over Napoli and one over Legia, and also parted with Leicester on the road.

Evaluating the performance of Spartak in the final round of the Europa League group stage, the former head coach of the railroad workers Yuri Semin noted the team's will to win.

Spartak continued their old traditions when they were the leaders of Soviet football: then they had character and strong-willed qualities.

The red and white demonstrated all this in the game against Legia.

They can only be congratulated.

Today we saw the same old Spartak spirit that existed under Romantsev and Konstantin Beskov.

The team showed the level and won.

“Spartak” has brought a large coefficient for Russian football, ”added the specialist.

And the goalkeeper Alexander Selikhov became the main hero of the red-and-whites in the LE.

In the course of the current season, he ousted Alexander Maksimenko from the base and began to work wonders in the European Cup matches.

In particular, he made some incredible saves in the return meeting with Napoli and saved penalties in the confrontations with Leicester and Legia.

It was his salvation in the 98th minute after hitting from Tomas Pekhart's “spot” in Warsaw that allowed Spartak to finish first in the group, and not be content with a performance in the League of Conferences in the spring.

For example, the former goalkeeper of the Russian national team Ruslan Nigmatullin recalled a series of injuries that a football player went through in recent years.

“I am very happy for Sasha.

He had a difficult period with injuries.

Many could break down ... Selikhov, however, showed character and will.

Recovered and returned to a very decent level.

The goalkeeper is half a team, and Sasha demonstrated this.

He showed a bright game before the injury.

Then an evil fate came ... A very difficult test for any person.

It is gratifying that he was able to overcome all this, ”said Nigmatullin.

In his opinion, Selikhov has become one of the leaders of the team.

“He didn't have the best story, Alexander didn't play for almost two years due to injuries.

Now Selikhov has proved that he is a super-good goalkeeper.

The football god exists: he thanked Sasha and the whole team.

Congratulations to everyone who is worried about Spartak.

Eurocups have become a kind of sweet pill for Spartak, "Bazhenov emphasized.

However, Spartak defender Georgy Dzhikia had no doubts about Selikhov's successful play and, in particular, believed that he would reflect Peckhart's shot from the penalty spot.

“It turned out to be a cool match.

I want to congratulate everyone who sincerely worried about us.

We are all very happy.

Our dressing room, in my opinion, needs to be renovated.

Selikhov said before the kick that he would take this ball, you can ask him yourself later.

He is a master in this matter, "- quotes the words of the captain of" Sport-Express ".

No less surprising is the fact that this historic victory could be one of the last at the head of Spartak for Rui Vitoria.

Earlier it was reported that the decision on the future mentor would be made by the club's management in mid-December.

The name of the specialist who, allegedly, will replace the Portuguese, Paolo Vanoli, has already been named.

“Vitoria proved that he can work - not just in the match with Legia, but in general in recent months, especially in the Europa League. Rui demonstrated: he can build football, show a picture, how to see. If he had a different line-up and the people he wanted to invite, there would be a completely different game. Vitoria is a strong coach. Spartak's management needs to think. I would not want to be in their place now. The main thing is that Vitoria is trusted from all sides, since no one doubts that he is a good specialist, "Bazhenov admitted.

At the same time, the Portuguese coach often could not count on all the strongest.

For example, Jordan Larsson, Esequiel Ponce missed the decisive match with Legia due to injuries, while Alexander Sobolev and Ruslan Litvinov were disqualified for going over yellow cards.

Problems arose before: in the first meeting with Napoli, Maximiliano Kofrie was sent off.

And even in such a situation "Spartak" was able to become the first in the group.

This result cannot but please the Russian fans.

In recent years, we could only dream of two teams in the European playoffs.

Last season, domestic teams won only once in the UCL and LE group stages.

Taking into account the not very successful performance of the national team at Euro 2020, Russian football fell lower and lower in the eyes of the fans.

But autumn gave hope for the best.

Whether it will be justified, we will find out in the spring.