Magnus Carlsen defended his world chess title ahead of schedule. He won the fourth victory in the match with Ian Nepomniachtchi, who played with white pieces. The 11th game was going to a draw, however, due to the mistake of the Russian grandmaster, the Norwegian gained a huge advantage and brought the meeting to a favorable outcome for himself. 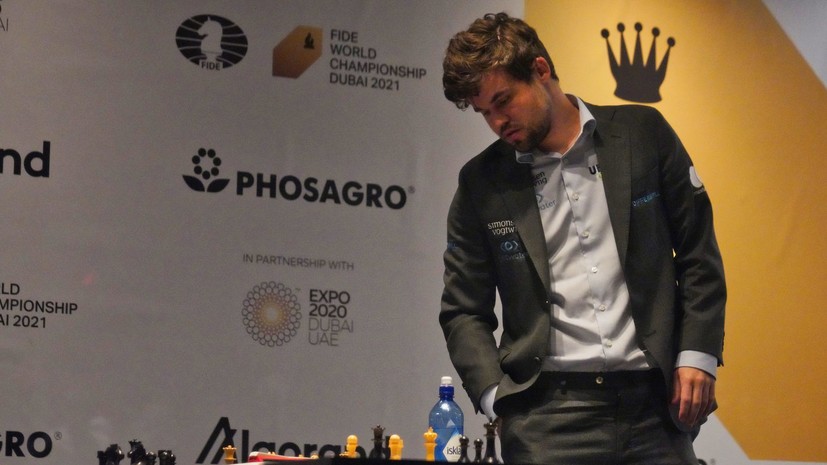 Game 11 of the World Chess Championship match could have been the last for Magnus Carlsen and Ian Nepomniachtchi.

Although the regulations stipulate 14 meetings, the last three games would no longer make sense if the Norwegian won.

He has already won three fights, and for early confirmation of the title he had to get only one point - with the help of either two draws or the surrender of the opponent.

In fact, Nepomniachtchi had only one chance to continue the struggle.

Since he was unable to create insoluble problems for Carlsen with black pieces, the Russian needed to show all his skill in playing with white right here and now.

Any outcome, except for victory, hardly allowed the challenger to count even on a tie-break.

In the potentially last game, the players played the Spanish opening, only with the third move Nepomniachtchi sent his bishop to c4 instead of the canonical square b5.

He had the opportunity to force Carlsen to sacrifice a pawn, albeit at the cost of transferring some initiative, but the Russian did not risk it.

The first nine moves passed at a calm pace and did not reveal a favorite in this fight.

They managed to confuse Carlsen by moving the bishop to e3.

He thought for ten minutes before deciding to trade this piece.

It didn’t do any good for any chess player.

Soon Nepomniachtchi decided to remove the light-squared bishops from the board, which the Norwegian supported by moving his rook to e6.

In response, the Russian used the queen for the first time and retained, albeit still a drawn, but not hopeless position.

However, what followed were fairly standard moves in full accordance with computer calculations.

The opponents were rapidly approaching an impasse, which could have been avoided by a massive exchange, for which all the conditions had been prepared.

The middle of the field was oversaturated with pawns, knights were threatening each other on the kingside, and queens were on the necessary diagonals.

The exchange did take place, but it did not become such an avalanche, as has happened in some previous games.

Position has clearly could be interpreted as a no man's, and the Norwegian cost sympathize, because it all kind shows how much suffering because of hopeless course of the party.

Suddenly Nepomniachtchi managed to defuse the situation, but again the occasion turned out to be completely bleak for him.

In an attempt to aggravate the game, he moved the pawn to g3, calling on the black rook to retreat from f4.

Only this move, chosen instead of a more rational throwing of pieces off the board, turned out to be deeply mistaken.

The departure of the pawn from g3 to f4 opened up a direct path for Carlsen's queen to the white king and the possibility, due to checks, to literally destroy the entire army of Nepomniachtchi from the rear, and the price of the rook in this case no longer mattered.

Now the Russian only had to decide exactly how he wants to lose - right away or after all by staging some kind of show.

The challenger chose the second option, giving the audience an opportunity to reflect on how White's mate could be.

Carlsen climbed into foreign territory as a queen, connecting his knight at the same time, but met with some rebuff from Nepomniachtchi.

The Russian did not allow mate and persuaded his opponent to exchange all pieces, except for one rook.

For a while, Nepomniachtchi's position even ceased to look completely hopeless.

He had one pawn less, but the computer gave him a tiny chance of saving.

Only elusive time prevented them from taking advantage of it.

The Russian grandmaster began to involve the king in the destruction of alien pawns, but in this way he gave the pawn on the h-file a chance to reach the promotion square.

The transformation of a pawn into a queen really took place on the 45th move of black, for which he had to sacrifice the rook. Carlsen launched an attack on the king with renewed vigor, and then Nepomniachtchi decided not to delay. After the 49th move, he resigned. This defeat became for the Russian the fourth in the match for the chess crown and the second in the game for the white pieces.

This rally of the crown became very unique in the history of chess. Carlsen won the fifth championship match - such dominance, if you do not take into account the era of split, only Emanuel Lasker and Mikhail Botvinnik achieved. For the first time since 2007, the champion won four victories, but then Viswanathan Anand won the title in a tournament with eight players and played all 14 games (Carlsen then did not advance beyond the Candidates Tournament). If we take into account the traditional matches with the participation of two opponents, then Anatoly Karpov last won at least four meetings in the fight for the FIDE title.

A new cycle of the struggle for the chess crown has already started.

Nepomniachtchi will return to the fight for her at the next Candidates Tournament.

In addition to him, Sergey Karjakin, American Fabiano Caruana, Frenchman Alireza Firouzja, Pole Jan-Krzysztof Duda, Azerbaijani Teymur Rajabov, as well as two best players in the Grand Prix of 2022 will try to become Carlsen's next rival.