Here is the Swedish squad for JVM

The junior crowns will soon be getting ready to play in the World Cup in Canada. Federation captain Tomas Montén has presented the squad. 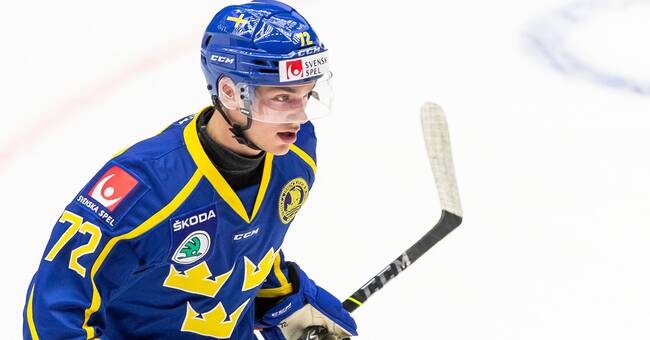 The junior crowns play in group A and meet the USA, Russia, Slovakia and Switzerland in the basic game.

Now the national team captain Tomas Montén has taken the squad to the championship.

NHL star Lucas Raymond, who has had a great season so far, was not included.

The star William Eklund was included among the names and so was Theodor Niederbach who is a name from last year.

Montén has chosen to take out 13 forwards.

- We will join the 14th forward later, says the national team captain at the press conference.

Alexander Holtz, owned by the New Jersey Devils, was also missing from the squad.

We keep a place open.

We will see who fills that place, says Montén.

On December 15, all players and leaders will gather.

After that, no more players can connect.

The players in the JVM squads must be under 20 years old to participate in the championship and the Swedish national team goes to Canada to Lucia for a training camp before the World Cup.

On December 26, Sweden begins with a match against Russia.

Montén makes his last championship with the Junior Crowns.

- It has been six fantastically fun years as the national team captain where I have had the privilege of meeting many wonderful players at JVM and during the seasons.

It is always a tough task to take a squad to JVM as we have had the opportunity to choose between many prominent Swedish juniors, and no squad has really been easier to pick out than anyone else.

Now we are fully charging for Red Deer and Edmonton, he says.

You watch JVM on SVT

Dusan Umicevic will host the studio in Stockholm, together with the experts Håkan Loob and Mikael Renberg.

- Anyone who wants to see creative hockey with a focus on speed and finesse should watch the junior WC.

Chris Härenstam comments on the matches SVT broadcasts together with the expert Jonas Andersson.

In Edmonton and Red Deer, where the matches are played, Marie Lehmann will be a reporter.

December 26 to January 5, the junior ice hockey world championships for men are played in Canada.