Dubai will witness the establishment of 20 various sports events this weekend, including four international championships organized in cooperation with the Dubai Sports Council and various national governmental and private institutions. A press release said: "The government games, the Dubai International Parachute Championships, and the World Championships are leading the way. 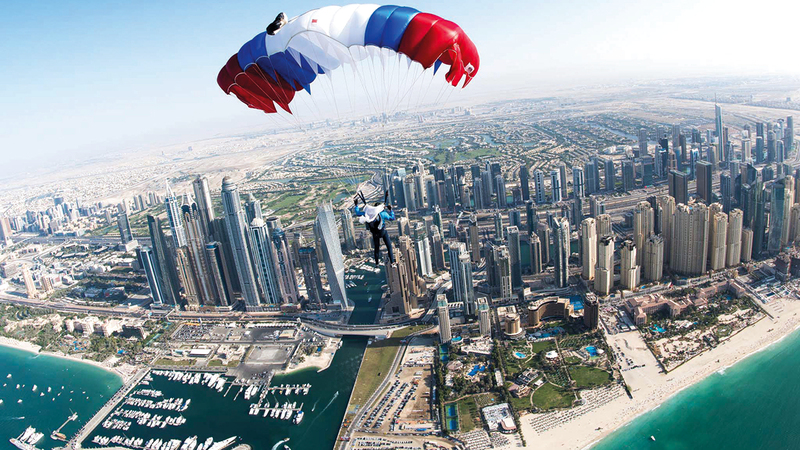 The Dubai International Parachute Championships will continue until the 17th of this month.

Dubai will witness the establishment of 20 various sports events this weekend, including four international tournaments organized in cooperation with the Dubai Sports Council and various national governmental and private institutions.

Agenda for sporting events over the weekend.

The sixth Dubai International Parachute Championship, organized by the Emirates Air Sports Federation, will be held, along with the “Dubai Master” International Championship for Wireless Free Flying, at Skydive Dubai, which will continue until December 17.

The third edition of the government games that will be held at Expo 2020 Dubai will also start with the participation of 137 teams in the community category and government agencies for men and women, and its competitions will continue until December 11.

The second and final round of the World Powerboat Championship (X-Cat) 2021, organized by the Dubai International Marine Club with the participation of 12 boats, will be held on the shores of Jumeirah on the waters of the Arabian Gulf.

The Sheikh Hamdan bin Rashid Chess Cup competitions, which are held in honor of the late Sheikh Hamdan bin Rashid Al Maktoum, may his soul rest in peace, continue on the sidelines of the World Chess Championship at Expo 2020 Dubai, with the distinguished participation of elite masters representing 23 countries, and they compete immediately. With the precious title, organized by the Dubai Chess and Culture Club, in cooperation with the Dubai Sports Council.

The World Chess Championship hosted by Expo 2020 Dubai will also continue until the 16th of this month, and will witness the strongest competitions in the history of the tournament, in which the Norwegian player Magnus Carlsen, who is currently the best chess player in the world, is defending his world title for the fifth time against the veteran Russian player Ian Nepomnyakhchi.

The fitness and bodybuilding exhibition will be held in Dubai Media City, the European Cup for Dragon Boat Racing at the waterfront in Deira, and the SuperSport Cross-Country Run at The Sevens Stadium.

The Seven Emirates Charity Cycling Race will be launched, which will tour all emirates of the country, and a five-kilometre running race will be held in Zabeel Park, an off-road bike race in Dubai Sports City, and the District One Triathlon Championship will be held in Mohammed bin Rashid Al Maktoum City (District). One), the Santa Dubai Festival City Run 1, 2.5 and 5 km, held in Festival City, and the Desert Purple Classic Powerlifting Championships at the Desert Purple Sports Club.

Hamdan Sports Complex will also host the Speedo 24 International Swimming Workshop, and the Water Polo Championship will be held at Vista Mar Club on Palm Jumeirah.