LIST: Here are five of the favorites for the Bragdguldet

At 1 pm today, it will be announced who will receive Svenska Dagbladet's award for this year's Swedish sports achievement - the classic Bragdguldet. Here we list five of the hottest candidates. 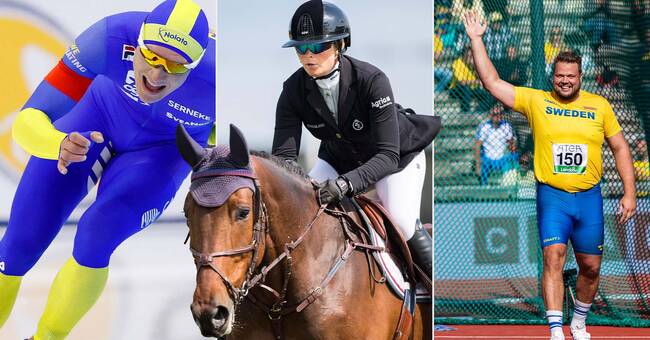 The thriller against the United States during the Olympics in Tokyo will not be forgotten by anyone who followed the drama.

The competition went to jumping, where Peder Fredricson got a gold medal served by teammates Henrik von Eckermann and Malin Baryard.

At All In, Fredricson won the first Swedish Olympic gold in a team since 1924 in the last round.

Took home Olympic gold in pole vault at a height of 6.02 in superior style over his competitors.

Received the Bragdguldet 2020. To receive the prize a second time requires an achievement that is considered to be in a class of its own.

Double gold in the World Cup in Heerenveen.

One of Sweden's biggest gold jumps before the Olympics in Beijing and dominates the skating competitions right now.

Crowned the year by setting the world record in the 5,000 meters to a time of 6.01.56 in the World Cup in Salt Lake City last week.

Took Sweden's first Olympic gold in athletics since 2004 in Athens when Stefan Holm, Carolina Klüft and Christian Olsson took each.

The sport is dominant on the discussion side this year.

Struck with a victory in the British Open, which can be counted as Anna Nordqvist's greatest achievement so far in her career.

It was her third major victory of her career.

Here are some of the challenges:

Took double sprint gold at the WC in Oberstdorf.

First individually and then in the sprint relay together with Maja Dahlqvist.

The World Cup gold in biathlon was Sweden's first on the men's side since 1958. Ponsiluoma then spiced up the championship with bronze in mixed relay and silver in men's relay.

Late on the list of candidates, but the first World Cup gold in doubles in 30 years created a new table tennis fever in Sweden together with Truls Möregårdh's silver in singles.

See the finish line in Salt Lake City in the clip.