Tomorrow, the third edition of the government games will start in the "Expo 2020 Dubai" village, and will last for three days, under the directives of His Highness Sheikh Hamdan bin Mohammed bin Rashid Al Maktoum, Crown Prince of Dubai and Chairman of the Executive Council. A total of 137 teams are participating in the two categories of community games and government agencies (men and women). 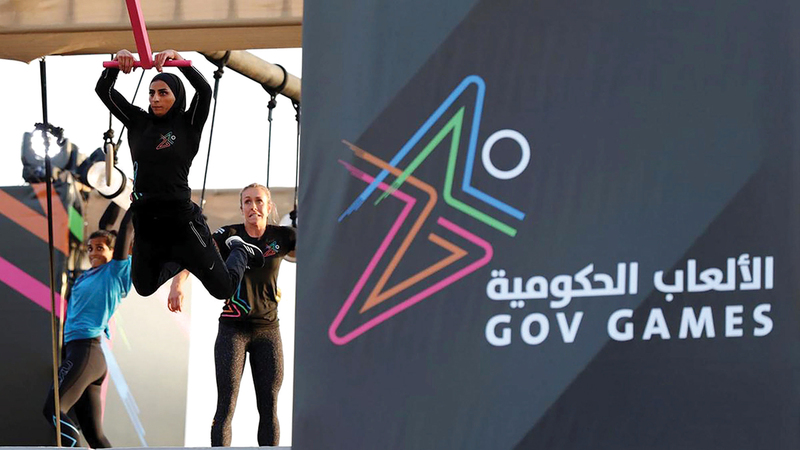 It kicks off tomorrow at the Expo 2020 Village.

Tomorrow, the third edition of the government games will start in the "Expo 2020 Dubai" village, and will last for three days, under the directives of His Highness Sheikh Hamdan bin Mohammed bin Rashid Al Maktoum, Crown Prince of Dubai and Chairman of the Executive Council.

137 teams will participate in the categories of community games and government agencies (men and women), 72 teams for men and 39 women, and 36 teams in the community games category, with total prizes of 2.7 million dirhams, and the winning team will receive 500,000 dirhams in each category, compared to 250 thousand dirhams. Dhs for the second place holders, and 150 thousand dirhams for the third place.

This came during the introductory tour, organized by the Organizing Committee for the media, yesterday, and attended by the Director of Government Games, Marawan bin Issa, where the nine challenges that the participating teams must overcome, to reap the largest number of points to reach the final challenge, and win the title Champion of "Government Games".

The Government Games, launched by His Highness Sheikh Hamdan bin Mohammed bin Rashid Al Maktoum, in 2018, are a unique initiative of its kind globally, consisting of a series of physical and mental challenges that gather participants from various government agencies in one place, with the aim of consolidating the principle of teamwork and the spirit of One team among government employees, and enhancing cooperation between local and federal government agencies and community members. The participating teams compete among themselves to pass nine challenges to reach the final, provided that the time period for each challenge does not exceed 10 minutes, while collecting the largest number of points to qualify.

Marwan bin Issa stressed that the nine challenges were carefully studied, with the application of best practices and international standards, and said in a press statement: “Safety standards are a priority for us, as we put, before implementing the challenge or barrier, safety standards among our priorities, and we are keen to implement standards Global government games.

He added: "This year's championship comes in a different context, as it was decided to transfer the event to the (Expo 2020 Dubai) village, and we are proud to be part of this great global event, which witnesses the influx of visitors from different countries of the world, which contributes to introducing the mission and goals of the government games." .

• It will last for three days, with the participation of 137 teams (men and women).

Calculation of points and number of team members

■ Points are awarded according to the team's speed in completing the challenge.

■ Each team consists of five players with changes allowed, and they must all pass all stages.

■ 10 minutes for teams to complete each challenge, and equal rest time between challenges.

The 9 challenges of the third edition

1- Untie the knot: the secret of this challenge is to solve the puzzle. Without it, the team will not be able to pull the rock to its proper place, and it depends on balance.

2- The abyss: push climb up and solve the puzzle to get to the other side.

3- Bone-breaker: Whatever happens, do not lose the key so as not to lose the challenge.

4- Earthquake: teamwork and moving at the same pace: two basic steps to be able to overcome this challenge.

5- May Yosh: Run a distance of 6 km in one team as fast as you can while you are in place.

6- Suspension bridge: The team leader must give the appropriate task to each member of his team.

7- Enemy of Gravity: Arrange the letters to get GOV GAMES 2021, and get to the latest Government Games Challenge.

8- Run the wind: a lot of water, a lot of cooperation and a lot of team spirit to overcome this challenge.

9- Muscles: a challenge that combines mental and physical abilities... and most importantly: teamwork.