"One of the best in the league": Ovechkin made two assists and updated personal best

Washington captain Alexander Ovechkin gave two assists in the NHL regular season match against Anaheim and set another personal achievement. Moreover, for the first time in his overseas career, he scored 40 points at the start of the season in 26 matches. In the scoring race, the forward maintains third position, closing the gap with Edmonton leaders Leon Dreisatl and Connor McDavid. American journalists recognize the 36-year-old Russian as one of the best players in the league, but they do not undertake to predict whether he will be able to act as effectively for several more years. 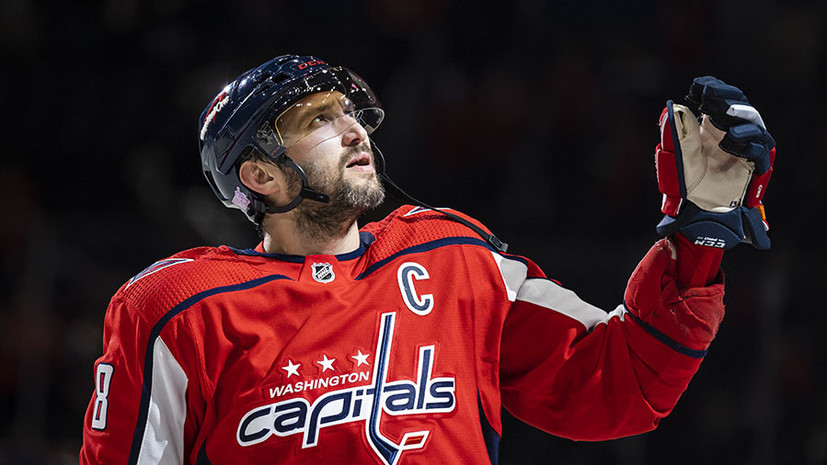 Alexander Ovechkin continues to churn out records in the NHL.

And if the striker fails to score himself, he actively helps his partners, gaining points as an assistant.

This happened in the home match with Anaheim: Washington scored two goals after the Russian passes.

The captain of the Capitals was especially charged with playing the Ducks, because in the first full-time match of the season he did not manage to upset the opponent, moreover, his team lost in overtime.

The meeting was not easy this time too.

The first period was dictated by "Washington", and it is quite logical that the team left for the break with an advantage of one goal.

In the 14th minute, forward Tom Wilson recorded his hundredth goal in the NHL, and Justin Schultz and Ovechkin took part in a beautiful combination.

However, it was not the ninth second of the second period that Anaheim won back.

Soon the hosts took the lead again, but towards the end of the playing segment, Dax first leveled the score, and then took the lead.

The guests were supposed to leave for the break, having an advantage, but Josh Manson was confused under pressure and literally presented the puck to the Capitals captain.

The Russian could throw himself from a lethal position, but once again showed that the team's results for him are above personal achievements: Ovechkin passed a pass to John Carlson and the American defender restored parity - 3: 3.

In the third period, the fans did not see the goals, although the coaches tried to make changes to the game.

Washington mentor Peter Laviolette transferred Alexander to the link with Lars Eller and TJ Oshi, separating him from Yevgeny Kuznetsov.

But it was not possible to score Ovechkin even in such a company.

In the shootout, which eventually ended the meeting, Alexander realized his attempt, leaving no chance for John Gibson, and the winning shot was made by Carlson.

The Capitals have come out on top in the league standings, beating Florida, which have two games in hand.

As for Ovechkin, the Russian has already scored 41 (20 + 21) points in 26 matches and gave his best start of the season in his overseas career.

Also, the forward repeated the club record set by Dennis Maruk in the 1981/82 season.

In the current season's top scorers' debate, the Captain's captain is just a little behind Edmonton forwards Leon Dreiseitl (43) and Connor McDavid (42).

Now the Russian has 611 assists during his career in the NHL.

According to this indicator, Ovechkin came out on a clean 88th place in the history of the league, surpassing the result of Marian Gossa.

In addition, Alexander scored two or more points in the 386th NHL match.

According to this indicator, he bypassed Finn Jari Kurri and now ranks third among European hockey players in the entire history of the league.

The Czech Jaromir Jagr is in the lead (540 matches), the second place is occupied by the Slovakian Stan Mikita (403).

Foreign journalists continue to admire the actions of the Russian.

American columnist Vince Mercogliano notes that Ovechkin remains one of the best in the league, but it is not known how long that will last.

It's a pleasure to watch him play.

You are amazed that at 36 he continues to score at the same high pace.

“How many goals does he have left (before Wayne Gretzky's record -

We'll have to play another four or five seasons.

If he spends all five years under the contract, I think a record is possible.

But no one knows when he will start to age.

He's playing well right now, but will he be able to do the same in three or four years?

It's hard to predict, ”added the analyst.

Interestingly, at the post-match press conference, Washington striker Karl Hagelin, who scored the first goal of the season, spoke about Ovechkin's son, Sergei.

According to the forward, the boy predicted his goal.

“He knew about it yesterday.

At one time, I gave him a toy with a bobble head, made from me.

So he told his father yesterday that I will score.

Ovi told me about it this morning.

We need to listen to him, ”the official website of the NHL quotes the words of the hockey player.