The relay hero about the final drama: "Be really tight"

Moa Olsson became the relay hero for Sweden. The 24-year-old sprinted home a second place after a settlement with Norwegian Helene Marie Fossesholm. - Very nice that you could pull a little longer straw today, says Moa Olsson to SVT Sport. 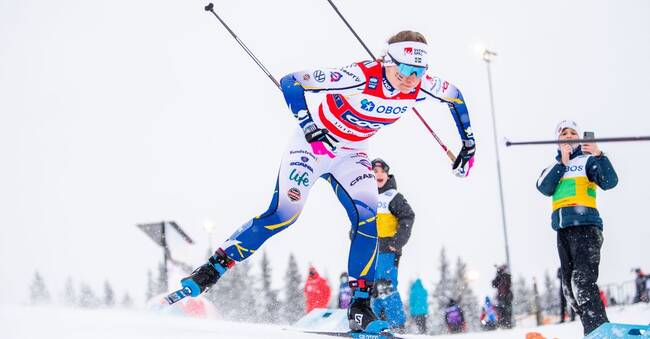 Moa Olsson got the chance on the last leg of the first team and made sure that it was a second place for Sweden.

And it was a distance she herself wanted to drive.

- I think it's quite funny.

It can be a bit of a thief and racketeering game, she tells SVT Sport.

Moa Olsson, Norwegian Helene Marie Fossesholm and Russian Veronika Stepanova held together throughout the last stretch and had a comfortable distance down to the remaining skiers.

- I got an incredibly nice slide before the last uphill and wanted to lie first so that they would be forced to walk around me, says Olsson.

After the last small climb towards the stadium, Stepanova passed, managed to get a gap and connected the grip on the gold.

Behind that, there was a battle between Norway and Sweden for second place.

Olsson stepped up alongside Fossesholm in the riot, was a bit sharper in the sprint and beat the Norwegian by a tenth.

- It was really tight, that was it.

But it's great that you could pull a little longer straw today.

It was fun, says Olsson about the fight in the riot.