Chelsea win the FA Cup for the third time. Magdalena Eriksson's Chelsea drove over Jonas Eidevall's Arsenal in the final. Exactly 100 years after the ban on women's football in England was introduced. 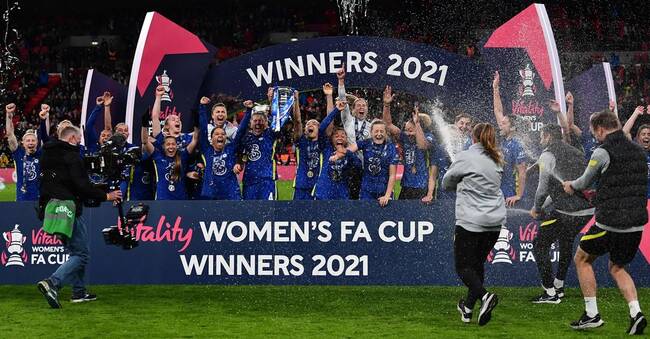 On 5 December 1921, the English Football Association introduced a ban on women's football, on the grounds that it was inappropriate and should not be encouraged.

The ban was lifted 50 years later and the FA Cup on the women's side has been played ever since.

"I can not help but think how grateful I am for the fact that tomorrow we can welcome more than 50,000 people to Wembley and together celebrate the development of our beautiful sport," wrote Chelsea's team captain Magdalena Eriksson on social media yesterday.

Today, her Chelsea took home the team's third FA Cup title in the 50th edition of the tournament.

- We have painted Wembley blue.

It really is a Chelsea day and our effort was excellent, says coach Emma Hayes after the match according to the BBC.

Chelsea got off to a dream start in the final against Arsenal.

The ball bounced off Chelsea's path and Fran Kirby was able to put in 1-0 already in the third minute.

Sam Kerr then extended early in the second half when she found a gap between the legs of Lotte Wubben-Moy in the Arsenal defense.

She followed this up by offering a real class goal.

Kerr drove in from the right, elegantly lobbed the ball over Manula Zinsberger in Arsenal's goal and set the final score 3-0.

- I get paid to score goals, but our defense was fantastic and it was a team effort.

I long to be able to party, says the two-goal shooter.

But Sam Kerr may have to wait for the party.

According to the BBC, Emma Hayes says that there is zero chance that there will be a celebration after the match because the team will already face Juventus in the Champions League on Wednesday.

Chelsea's other Swedes, Jonna Andersson and Zećira Mušović, got to follow the final from the bench.