"Russian tennis at the top again": Medvedev and Rublev won the first Davis Cup for Russia in 15 years

The Russian national tennis team won the Davis Cup for the third time in history. In the final, she left no chances to the Croatian national team, again not bringing matters to a doubles meeting. First, Andrei Rublev broke the resistance of Born Goyo, and then Daniil Medvedev defeated Marina Chilic in two sets. After the match, Medvedev admitted that he was going to the tournament exclusively to win, but these two weeks were the most difficult in his career. 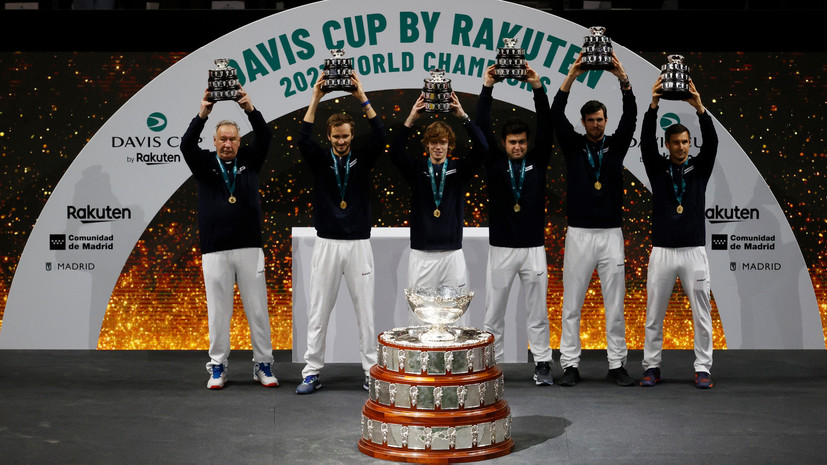 The Russian national tennis team won the Davis Cup for the first time in 15 years.

The national team consisting of Daniil Medvedev, Andrei Rublev, Aslan Karatsev, Karen Khachanov and Yevgeny Donskoy took over in 11 out of 13 matches, and did not lose a single set in the playoffs, if we leave out of the brackets the actual exhibition doubles meeting in the semifinals with the German team ...

The rival of the national team in the final was Croatia, which sensationally knocked Serbia out of the fight with Novak Djokovic at the head.

And this despite the fact that the team arrived at the tournament without one of the leaders - Borna Coric.

The athlete still has not recovered from his injury in March.

In the absence of the 2018 Davis Cup winner, Borna Goyo became the second number of Croats in singles, occupying the 279th place in the world rankings, and it was he who was destined to become the main discovery of the tournament.

The tennis player alternately was able to defeat Lorenzo Sonego (27th racket of the world) and Dusan Lajovic (33rd) in the knockout round. These points became key in the matches, because after the defeats of Marina Cilica, they allowed to bring the matter to the third meeting, where the leaders of the ATP doubles rating Mate Pavic and Nikola Mektic entered the fight. Neither Italians nor Serbs could cope with them.

I did not want to bring the matter to a showdown between the pair and the Russian tennis players. Therefore, much was determined already in the confrontation between Rublev and Goyo. Previously, the rivals met only once: in 2019 at the Davis Cup group stage. Then the fifth racket of the world had no problems. He won 6: 3, 6: 3. The 24-year-old Russian felt confident this time too. Despite the large number of matches played in the tournament, Rublev looked sharper and faster on the court. As a result, in the fourth game, he finally made a break, which was decisive in the first set. The Russian had no problems with his serve. Andrei gave the Croat only two points in the game - in one case it was a knockout move, and in the other a double mistake.

The second set developed according to the same scenario, with only one difference: Rublev failed to make a break.

He actively clung to the points at the reception, but at the decisive moments Bourne turned on and pulled out the seemingly lost games.

Also, the Russian began to make more mistakes at the reception.

At the same time, Rublev did not have any problems with his filing, it was now impossible to win them easily.

As a result, the game smoothly rolled to a tie-break.

The key in it was the draw when the score was 5: 4 in favor of the Croat.

Andrey pulled out the hardest ball and beautifully swept the opponent along the line, and then calmly brought the matter to victory - 6: 4, 7: 6 (7: 5).

After the meeting, he noted that in the second batch of Bourne, he began to serve significantly better and therefore it was problematic to make a break.

“In this match I did not relax, I also gained momentum, continued to fight, to fight for every goal.

It doesn't matter what the score is.

I would say that Goyo added in the second set not in the game, but in the serve.

But he still had to take a lot of risks, and when there is an important moment in the match, it is not so easy to do it.

As a result, I managed to win and show good tennis, ”Rublev said to Okko Sport.

Much more difficult was the duel between Daniil Medvedev and Marina Chilich.

The rivals know each other well.

The last time they met was quite recently - at Wimbledon.

Then it turned out to be a difficult five-set duel, which the Russian won with difficulty.

This time, the first game also took place in a double-edged struggle and made the fans jittery. The tennis players took their serve, but with great difficulty. And it seemed that every point could affect the outcome of the meeting. Medvedev did not have the first serve - it went through time with a creak (55%), and Cilic had a slight advantage during long rallies. As a result, the rivals got to the tie-break, which also turned into a swing. The decisive factor was Medvedev's double mistake when filing for the set with the score 7: 6. But she did not do a disservice, but mobilized Daniel - he immediately took his serve, and then won the rally backhand.

After he managed to take the first set, the Russian calmed down and began to act more coolly on the court.

At the same time, Chilich himself presented a gift to Medvedev in the fourth game.

Horvath made a double mistake and gave his opponent a chance to catch on, which he took full advantage of.

The long-awaited break - and then the Russian already completely controlled the game, not allowing Marina to impose a fight - 6: 2.

After the match, Medvedev admitted that he was going to the Davis Cup only to win, but the decisive games were very difficult for him.

I am most happy for the team, not for myself.

We now have an amazing atmosphere in the team.

I am glad that I brought the most important point, which we lacked so much.

It's incredibly difficult to play at the very end of the season.

These are some of the toughest weeks of my career and I am also proud of my performance.

Marin is an incredible tennis player, throughout the match he practically did not give me a chance, everything was decided by the tie-break of the first set.

At first I made a double mistake, it was very serious, but then I got a chance to recoup.

It was a difficult match, but this is typical for the big final, ”Medvedev admitted.

At the same time, Russian experts did not doubt the victory of Shamil Tarpishchev's wards.

2002 Davis Cup winner Evgeny Kafelnikov noted that the national team had a large margin of safety.

“The guys are stronger than their class rivals. There is a feeling that they skated through the competition. The golden double, taking into account the victory of the girls (in November, Russian tennis players won the Billie Jean King Cup -

). Of course, this suggests that Russian tennis is at the top again. I hope this trend will continue, all the prerequisites for this are in place, "- quotes the words of a TASS specialist.

The Russian national team won the Davis Cup for the third time in its history and for the first time in 15 years.

The last time a national team brought the trophy home was in 2006.

Then Nikolai Davydenko, Marat Safin and Dmitry Tursunov played for her.

As for Tarpishchev, he became the fifth captain of the national team in history with three victories in the Davis Cup.