Sweden will once again fight for the gold in the floorball WC. The host nation drove over Switzerland in the semifinals. - It is of course an incredible joy, says Moa Tschöp to SVT Sport. 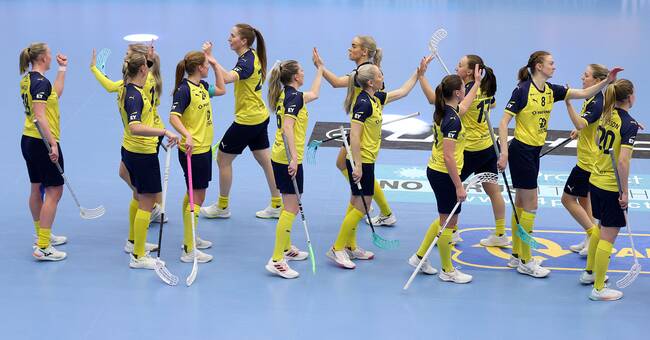 Tomorrow, the Swedish ladies will have the chance to take the eighth straight World Cup gold in front of the home crowd in Uppsala.

And it was a goal celebration when the final place was secured.

Sweden won the semifinal against Switzerland 14-1.

- It is of course an incredible joy.

What a fantastic team we are and we run over them throughout the match for the most part.

You can say what you want about them not bidding but Switzerland is not a bad team.

They do well, but we are so incredibly good in this team, says Moa Tschöp.

However, there was no taste start for them blue-yellow.

Sweden did not really get to the game and in addition, experienced Emelie Wibron burned a penalty early in the match.

But after just under eleven minutes of play, the redemptive first goal still came.

Then the goals rushed in.

The first period ended 4-0 and Sweden did not slow down in the middle.

With the minute left until the second break, Wilma Johansson scored her third goal of the match and the scoreboard showed 10-0.

I think the whole team does a great job both defensively and offensively, said Wilma Johansson after the second period.

The Swedish joy of the game resulted in four more hits in the last period and despite Switzerland scoring a reduction goal, the match had already been decided a long time ago.

- It is self-confidence in everyone.

Everyone knows what to do.

It's just fine, I do not know what to say.

We drive over them completely, says Moa Tschöp.

The second semifinal will be played between Finland and the Czech Republic on Saturday night.

The final will be played tomorrow, Sunday, and will be shown on SVT1 and SVT Play.