No chance of aggravation: Nepomniachtchi failed to recoup in the seventh game against Carlsen for the chess crown

The seventh game of the World Championship match between Magnus Carlsen and Ian Nepomniachtchi ended in a draw. The Russian tried to impose a fight on the Norwegian with white pieces, but was unable to achieve a tangible advantage. As a result of numerous exchanges, by the 30th move there was a minimum of chances for the aggravation of the position. The grandmasters shook hands for the sixth time, and the score in the match was 4: 3 not in favor of the challenger. 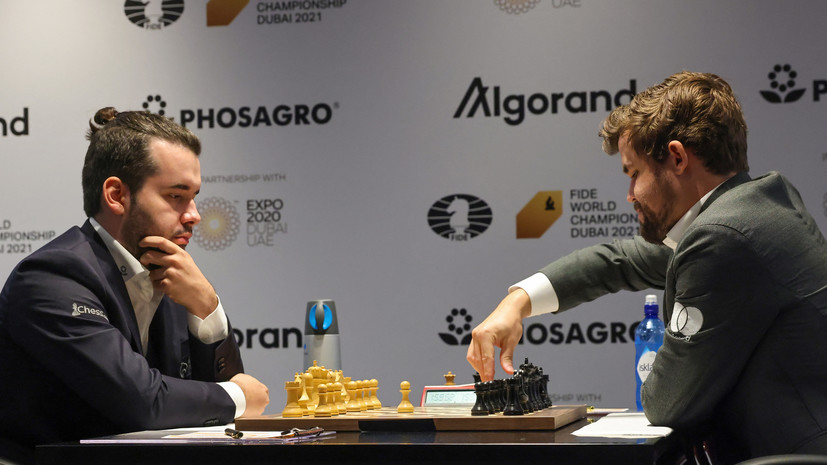 In the battle of Magnus Carlsen and Jan Nepomniachtchi for the chess crown, a turning point has finally occurred. The reigning world champion managed to win the sixth game on Friday, which became a record long for such a competition. After that, the rivals had almost no time either to rest or to analyze what had happened - the next day they were waiting for the seventh meeting in Dubai.

Chess history has not known any cases for a long time when a losing grandmaster could immediately recoup. The last time this was achieved by the Indian Viswanathan Anand in a duel with the same Carlsen in 2014. But then the rivals were just beginning to play the world champion title, both had plenty of energy for the future, and they did not exhaust themselves for eight hours in a row. Nepomniachtchi, once again having the white pieces at his disposal, had to accomplish a real feat in order to immediately deprive the Norwegian of the gained advantage.

The Russian athlete did not become like his opponent in the seventh fight and did not deviate from the standard practices. After the move of his king's pawn to e4, the Spanish game familiar to any grandmaster was played. Carlsen also did not want to indulge in the jungle and somehow aggravate the situation. After castling the Russian on the fifth move, he could have captured the only pawn that came out with his knight, but he preferred the cautious transfer of the bishop to e7, which closed the opportunity for an open opening variation.

The fans have already seen all this in the fifth game, which ended in a draw on the 43rd move. Carlsen and Nepomniachtchi continued to copy it until the 11th movement of the pieces, when the Russian chose to move with his pawn not to c3, but to d3, strengthening the diagonal for the dark-squared bishop. Only then the world champion began to think over his actions more carefully and took the first short pause in order to stop the movement of the white piece with the help of the pawn on h6.

Nepomniachtchi continued to develop the opening with the knight on c3, but this idea was not crowned with anything good. A few moves later, the opponents simply exchanged this piece, which obviously should not have been part of the Russian's plans if he intended to quickly recoup the gap in the score. Then he began to play through the pawns and the dark-squared bishop, but to this Carlsen had a ready answer. At the first opportunity, he exchanged pawns in the center of the board, and then bishops on white squares. The Norwegian had no intention of playing to win and persistently persuaded Nepomniachtchi to draw.

The next attempt by the challenger to gain an advantage looked quite straightforward.

The transfer of the rook from the kingside to c1 was neutralized by the pawn on c5.

Although Carlsen sometimes allowed himself to ponder over the moves for a long time, he always found the solutions he needed and did not suffer as frankly as he did in previous games.

Compared to the fifth batch, which was similar to this one, the Norwegian felt completely calm.

Nepomniachtchi had to realize that he had not created any bridgehead for an attack for himself, and after yesterday's exhausting game he had no strength left to search for alternative options for the assault.

The Russian began to literally throw off all his pieces from the board, in which Carlsen warmly supported him.

Even when the chain of exchanges could be stopped, Nepomniachtchi continued to destroy the entire available army with his own hands.

On move 30, the opponents were left with one rook and three pawns. The chess players began to engage in meaningless movements of the pieces in anticipation of the moment when they could finally shake hands and disperse. Nepomniachtchi played, perhaps, his most boring game with White, in which he never once caused his opponent any problems. He admitted this himself, commenting on the results not only of this game, but of the entire first half of the match.

“The tactics were the same as in the previous games with White - to get something in the opening. White had a slight advantage, but Black's symmetrical structure and control over the e-file, plus his plan for the game, had an impact. And after my 20th move, the rook was completely equal. We played an even game, which can be called boring. Yesterday's had no effect on the choice of the opening. It was unusual to play two on the same day. I cannot say that I am satisfied with the first half of the match, there were moments when I could have played better. Yesterday, for example, I had an eclipse. I didn’t take the pawn on b4 two moves in a row. But some games turned out to be interesting, ”Nepomniachtchi told the Championship.

At the end of half of the games, Carlsen leads with a score of 4: 3.

In the remaining matches, he will have an advantage in the number of games with white pieces.

In order for Nepomniachtchi to turn the tide of the match, he will need to come up with something new in the near future, and not re-play the same openings that are well known to his opponent.