Medvedeva's first love, Kostornaya's new hobby and Bobrova's song: what is being discussed in the world of figure skating

Evgenia Medvedeva spoke about her unhappy love, and Alina Zagitova told how she fell in love with hockey. Four pupils of Eteri Tutberidze attended the show "Evening Urgant", and Alena Kostornaya, after a visit to television, decided to start her own YouTube channel. Ekaterina Bobrova tried herself as a singer, and the son of Evgeni Plushenko again became the object of jokes. What is being discussed in the world of figure skating - in the material RT. 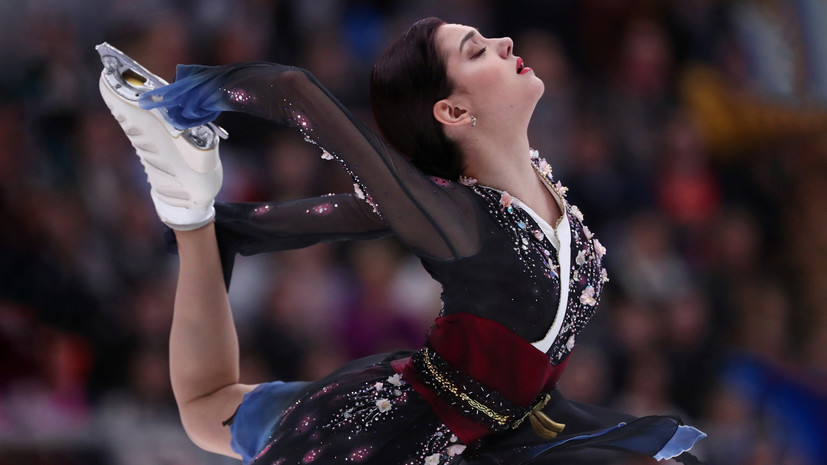 Fans are used to the fact that Evgenia Medvedeva's personal life is a secret sealed with seven seals.

The skater is ready to answer a variety of questions from journalists, but she always bypasses this topic.

The more unexpected was her story about her first love.

According to the two-time world champion, she dated the young man for almost two years, but after the Olympics in Pyeongchang, he decided to end the relationship with her.

The gap was a hard blow for the skater, especially since it fell on the most difficult period of her career.

you can't even imagine that you are more capable of love.

It all ended ugly.

The Olympics ended, and in a difficult moment, right after it, a man did this.

And just in plain text: "Thank you, I don't need you anymore, everything is cool in my life and without you, bye!"

- said Medvedeva in an interview on the YouTube channel "Macarena".

At the same time, the athlete dispelled persistent rumors about an affair with her partner in the Ice Age show Dania Milokhin, stressing that only friendship connects them.

Tiktoker himself, who took part in the conversation with Medvedeva, admitted: he likes the skater, but this does not mean that sympathy should develop into something more.

“There are beautiful girls who cannot but be liked.

But you don't think about the fact that you will meet and stay together for life.

No, she likes it, and you live with it.

Everything is fine, ”Milokhin explained.

Even in the last issue of Ice Age, Eugene and Danya appeared not in the classic image of a couple in love, but in the roles of Kai and Gerda from The Snow Queen (in a fairy tale, as you know, a boy and a girl love each other “like brother and sister”) ...

However, the judges of the project did not admire the rental.

In addition, the participants made several technical mistakes that did not go unnoticed.

Points should be deducted for such support.

If it’s scary, it’s better not to do it than to do it.

In any case, today there was nothing that would take me over, and I would like to put 6.0.

I understand, Kai and Gerda.

We must try to come up with something that would delight us, ”Tatiana Tarasova said.

In turn, the Olympic champion Tatiana Navka complained that the participants did not get a whole number.

They had cool performances, when everything was beautifully covered, and we saw what amazing things Dania did.

But today something went wrong, maybe in the production itself.

Indeed, without saying a word, all the judges gave such marks.

The feeling was not passed on to us, ”she explained.

In between the filming of various shows, Medvedeva manages to follow the development of events in the match for the title of world chess champion between the Russian Jan Nepomniachtchi and the Norwegian Magnus Carlsen.

The figure skater even launched a flash mob in support of the domestic grandmaster.

On the eve of the sixth game, she filmed a video depicting a chess piece of an elephant, and encouraged everyone to follow her example.

“In the summer I visited a chess tournament for the first time - then Magnus played with Andrey Esipenko at the Planet Cup.

I began to learn the rules of chess, became imbued with the game, we made friends with the guys from the RCF.

Now I really want to support Yan and draw attention to the match.

This is a very cool event.

I invite everyone to unite and support Nepomniachtchi using the #NepoGambit tag.

Post jokes, information under this tag, and also participate in the challenge on TikTok, ”suggested Medvedeva.

At the moment, the Russian grandmaster has lost in the sixth game of the match for the world title.

After the middlegame, it was the bishop that remained on the board for Nepomniachtchi.

Four pupils of Eteri Tutberidze took part in the filming of the TV program "Evening Urgant".

Kamila Valieva, Anna Shcherbakova, Alena Kostornaya and Maya Khromykh were delighted with the conversation with the charismatic presenter.

“My first and super fun exit to the“ Evening Urgant ”.

Had a lot of fun, one game was worth it.

And what a photo session!

Special thanks to my fans for the support banner!

You are the best, ”Valieva wrote on her Instagram.

And Kostornaya not only shared photos from the filming, but also talked about her new undertaking.

“It's not a secret for anyone that I love working on the camera and in this regard, I am sharing with you cool news ... Yes, now I will run my own Youtube channel, so turn on the sound of your phones and do not miss my first video,” she wrote European champion 2020.

Yekaterina Bobrova, Olympic champion in figure skating in the team tournament, said that she will appear in an unusual role at the ceremony of presenting the National Sports Prize.

The athlete will perform the song "Get hardened if you want to be healthy" together with commentator Dmitry Guberniev.

Ekaterina uploaded the video from the rehearsal from the studio to Instagram stories.

“It's hard to call me a singer, but trying something new is always interesting,” the figure skater wrote, asking fans “not to judge harshly”.

“Actually the song is very difficult but funny.

At first there was a little uncertainty, and then ... I like the confidence with which I speak at the end, "Bobrova emphasized.

The ceremony will take place on December 8 at the Irina Viner Gymnastics Palace in Luzhniki.

Meanwhile, Olympic champion Alina Zagitova congratulated the athletes and fans on the All-Russian Hockey Day and admitted that her father instilled in her love for this sport as a child.

“All the time I happily ran to the matches, watched the players' maneuverability, which any skater would envy, and watched the game as the coolest blockbuster.

This is how I got an eternal love for ice: even at the 2018 Olympic Games, figure skating and hockey won gold together, ”Zagitova wrote on Instagram.

She wished the players of the Russian national team victories and urged them to defend their title won in Pyeongchang.

Alina herself has already flown to Dubai, where the previous KHL regular championship away match between the current Gagarin Cup winner Avangard and Ak Bars took place.

It was held as part of the Dubai Ice Show project, which is timed to coincide with the Day of Russia at Expo 2020.

Legend of Two Kingdoms ", where Zagitova plays one of the main roles.

The famous comedian, host and resident of the Comedy Club Ilya Sobolev laughed at the advertisement on the sports uniform of the son of the Olympic champion Evgeni Plushenko.

“The Gnome Gnome has great branding.

I think if he continues to ride just as cool, there will be even more advertising offers, ”Sobolev wrote on Instagram under a satirical collage.

The answer of the mother of the young figure skater, producer Yana Rudkovskaya, was not long in coming.

Our agent, after your post, has already sold two promotional patches for sponsors!

You are in the share, kid, ”she wrote in the story.

It turned out that the comedian borrowed a joke from the Nebozhena Telegram channel, where a similar photo of Plushenko Jr. appeared a day earlier with the comment: “Cool branding of Gnomych.

Wondering how it looked in the presentation?

Rudkovskaya appreciated such humor even higher.

"Of course, there will be more zeros, but this joke seems to me sharper," the producer wrote.