Magnus Carlsen defeated Ian Nepomniachtchi with white pieces in the sixth game of the World Chess Championship match. The duel lasted 136 moves and became the longest in the history of the competition, breaking the 1978 record. During the meeting, both opponents made serious mistakes due to time pressure, but in the end they continued to play for almost eight hours. For the Norwegian, this victory was the first in the current confrontation. 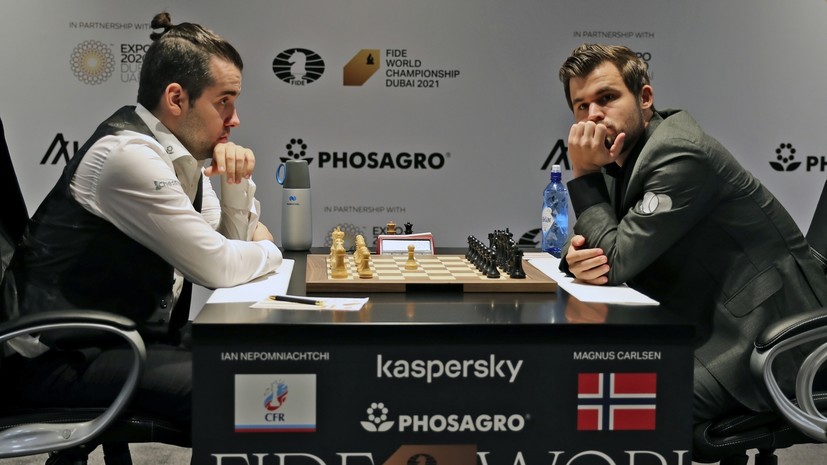 At the World Chess Championship in Dubai, an exhausting series of three games in a row began again for its participants.

At the beginning of their confrontation, Magnus Carlsen and Ian Nepomniachtchi had already played on such a schedule that was atypical for matches for the chess crown.

Only now the Norwegian had the opportunity to start another cycle with White and play them twice within three days.

This circumstance could well introduce some kind of variety in the course of the competition, which so far is not at all pleasing with its effectiveness.

If there was a draw in the sixth game, it would have become the 20th in a row, taking into account the previous fights of Carlsen with Sergey Karjakin and Fabiano Caruana for the title of world champion.

The symbolic first move this time was made by Moscow Mayor Sergei Sobyanin, who came to Abu Dhabi for the Expo 2020 exhibition.

The capital's mayor pushed his pawn to e4, but Carlsen disagreed with this move and returned the piece to its place.

When the game officially began, the Norwegian moved to d4, as he had done a week earlier.

The first ceremonial move of Game 6 was made by Sergey Sobyanin, Mayor of Moscow - the host city of the next Chess Olympiad, in presence of FIDE President Arkady Dvorkovich, and Natalya Komarova, Governor of the Khanty-Mansi Autonomous Okrug - Yugra.

The sixth meeting of chess players did not resemble the second for long. After the opponents brought the knights forward on the kingside, Nepomniachtchi played outside the box and moved the pawn to d5. Carlsen surprised no less in response by going to g3. The Russian thought about the continuation for several minutes. An opening appeared on the board, reminiscent of the Catalan one, but without the obligatory pawn move to c4.

Carlsen's further actions only confirmed the idea that the Norwegian decided to lead Nepomniachtchi into an unfamiliar position and test his ability to analyze and improvise in practice. The Russian grandmaster took up the challenge and responded as quickly as possible in his position, trying to restore stability to Black on the board. Carlsen even sacrificed a pawn, which nevertheless appeared on c4, after which any of his moves, according to the computer version, even began to give preference to Nepomniachtchi.

The defense of the dark-squared bishop by the queen, which was carried out by Nepomniachtchi, made Carlsen think about it. The world champion moved his knight to d2, not with the one that could open the locked word, but with the one that was still in the starting position. Soon the Norwegian leveled the score in pawns, and Nepomniachtchi decided to drive the knight that had made it with a pawn on b5, which was another surprise of this game. The Russian's idea worked - Carlsen again began to painfully ponder his actions, which would have to be taken after the knight retreat to e5.

As a result, the Norwegian chess player never found a brilliant way out of this situation. He spent several moves to offer Nepomniachtchi an exchange of queens, in fact admitting the failure of his original plan - in case of agreement, there could be no question of any other result except a draw. However, the Russian did not follow the lead of the opponent. He ate the bishop that entered f6 not with a queen, but with a pawn. It was an incredibly bold decision on the part of the challenger - he decided to play not only to win, but also to lose.

The exchange did take place, but less valuable pieces fell victim to it - except for the queens and rooks, Carlsen retained his knight, while Nepomniachtchi kept his dark-squared bishop on d4.

Gradually the game calmed down, and again none of the rivals could boast of a noticeable advantage, but it was too early to declare a draw.

The time factor began to come to the fore.

Both Carlsen and Nepomniachtchi risked being in time trouble, since 15 moves left one 23 minutes and the other 37.

When it seemed that the grandmasters were getting closer to an impasse, Nepomniachtchi suddenly defused the situation with an unexpected exchange offer - he gave up his two rooks for the queen, having previously removed the king from the eighth rank.

Carlsen agreed, but he was still threatened with time trouble, forcing him to make nine moves in 11 minutes.

First of all, in such a situation, he drove away the bishop of Nepomniachtchi by bringing the pawn to e3. By his next action, he advanced the pawn to h4, cutting off the black king from the fight and covering his own, taking him back to h2. Carlsen had real chances to mate with the help of rooks and knights, but Nepomniachtchi also had a trump card in the form of a pawn on a4, ready to one day become another queen. The Russian could still offer a draw, but he had enough time to consider all the options.

Nepomniachtchi went to clear the road with the help of an elephant, and made a mistake. Carlsen immediately took away the rook on c5 necessary for mating and trapped the black bishop. The computer instantly overestimated the situation, calling the Norwegian the favorite of this fight. But then the world champion missed the mark. He did not squeeze the bishop in a vice and took the other rook to d1. Nepomniachtchi's bishop fulfilled its mission and took the pawn on a3, while remaining alive. Now Carlsen had to come up with an escape plan for his rooks, separated by alien pieces, in a matter of seconds.

He did not offer anything concrete, leaving Nepomniachtchi the opportunity to destroy one more pawn on b4. However, the Russian did not touch her, although this move opened up the most tempting prospects for him. In the end, he still took the pawn, but with an obvious delay, when the initiative almost slipped out of his hands. Only Carlsen's time trouble saved him - he himself did not have time to think over all the options. By the 40th move, after which the chess players received another hour of time, the black queen, bishop and pawn had gathered in one place, but were not yet extremely tightly surrounded by white pieces.

After a short break, the chess players began to play the game with renewed vigor.

Carlsen was still simultaneously solving the problem of neutralizing the pawn on a4 and creating a threat on the kingside.

It took the world champion 13 moves to complete the first part, after which the computer began to give preference to white, although without strict time control, a draw seemed an obvious outcome.

Carlsen could not put the black king in a difficult position.

Nepomniachtchi calmly reacted to any attempts of the opponent to exacerbate the situation.

The Norwegian only imposed another exchange, after which the Russian had only a queen and a pawn on h5, while Carlsen still possessed three pawns, a rook and a knight.

But following the results of 83 moves, the world champion did not have a solid advantage.

Only with the layouts of the computer, Carlsen did not agree.

Six hours after the start of the game, he retained the strength to continue the pressure.

He still had to keep in mind the 50-move rule to avoid a draw.

With the beginning of the second hundred moves, Carlsen began to move his pawns, and Nepomniachtchi quickly ran out of all reserves for defense.

On move 125, a significant event took place - this game broke the record for the duration of matches for the world title.

The previous achievement belonged to the fifth game of Anatoly Karpov and Viktor Korchnoi, played in 1978.

Only if then a draw was fixed, then now Carlsen was inexorably approaching victory.

He was able to achieve success on the 136th move, after which Nepomniachtchi still resigned, ending the fight that lasted almost eight hours.

For the first time in more than five years, a draw was avoided in the battle for the chess crown.