Desert hockey: how the KHL played the match between Avangard and Ak Bars in Dubai

The UAE hosted the country's first regular KHL championship match. Avangard and Ak Bars held an away meeting in Dubai in the presence of over 5 thousand fans. The game ended with the victory of the Kazan team with a score of 3: 1. According to the president of the league, Alexei Morozov, the emergence of a club from the UAE depends on the successful holding of this event. 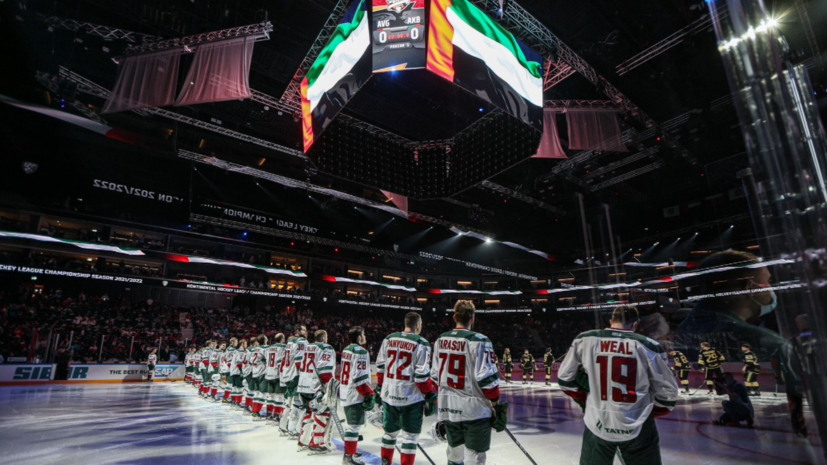 The geography of the Continental Hockey League (KHL) now extends to the deserts of the Arabian Peninsula.

Avangard Omsk and Ak Bars Kazan played a regular championship match in Dubai, showing the residents of the UAE high-level hockey for the first time.

The meeting in an unusual setting ended with the victory of the club from Tatarstan.

In the history of the KHL, there have already been many cases when the league sent its teams on tour to other countries, but usually regions where hockey is already quite developed came to its attention. Individual matches have already taken place in Switzerland, Austria, Estonia and Lithuania, allowing the KHL to open up new markets, expand its influence and attract new fans. In the same season, the choice of location for the rendered game fell on the country, which is in the last place associated with any winter sport.

The initiator of the visit to the UAE was the current owner of the Gagarin Cup "Avangard", which, due to the reconstruction of the arena in Omsk, is still located in Balashikha near Moscow. The match with Ak Bars was timed to coincide with the Expo 2020 exhibition, within the framework of which the World Chess Championship match between Magnus Carlsen and Jan Nepomniachtchi is also being held in Dubai. The multifunctional Coca-Cola Arena was chosen for the hockey match, on which ice was first laid just five days before the throw-in. Usually it accommodates 17 thousand spectators, but for hockey in the context of the pandemic, it was allowed to sell 7 thousand tickets at prices ranging from $ 41 to $ 110.

KHL President Alexei Morozov explained why the league decided to pay attention to the country whose hockey team is in the top ten of the best national teams. According to him, this sport can be developed in the UAE and there is interest in it.

“This is the first time we are communicating in Dubai, and a real professional league match will be held here for the first time. We are glad to this event, we are glad that KHL World Games is back. We are grateful to Avangard, who agreed to hold their home match in the Emirates. It is strategically important for us, it is important for the popularization of hockey, in order to introduce the UAE to real hockey. We are waiting for the fans today, for the teams to show a beautiful game, in order to attract people to hockey - this is a promising region that can develop in hockey. We believe in this. A lot of work was done to organize the match, the arena is comfortable here, all the teams are happy. Today everything is ready for holding, we are waiting for this event, "- said Morozov on the day of the game.

He also noted that the possible appearance of a full-fledged club from the UAE in the KHL depends on this match, about which there have been many rumors lately. Morozov said that, first of all, the league will pay attention to the quality of the arena so that matches on it can be played without problems.

“As for the team, a lot will depend on the event: at what level it will take place, how the local public will like it, how interested people will be. The club must comply with all rules and regulations. It took seven days to prepare the ice for this match, many difficulties were resolved - so here it will be necessary to work with the arena and with other problems. Today we will concentrate on holding the match between Avangard and Ak Bars. First, you need to conduct it, show what hockey is, you need to interest the audience. And then it will be necessary to communicate with specific proposals - do they want to create a team here, do they want to, can they prepare the arena so that the ice can be prepared for more than seven days for the game. There are many nuances. We will deal with them later, ”said the head of the KHL.

The match between Avangard and Ak Bars in the UAE was preceded by an ice show with the participation of Olympic champions Tatyana Navka and Alina Zagitova - one can rarely find such a level of warm-up in hockey. The only unpleasant moment associated with the game was the absence of Danis Zaripov in the Kazan squad. In Dubai, he could have played his 1300th match, but by the decision of head coach Dmitry Kvartalny he was not included in the application, so that the anniversary could be celebrated in front of his fans.

But the absence of the five-time Gagarin Cup winner did not weaken the nominal guests in the least. "Vanguard" did not show itself in any way in the first period, and should have blamed not on the ice, to which no one had any complaints, but on its own removal. Because of them, in the first 20 minutes, Omsk managed to inflict only five shots, and the puck flew in the direction of goalkeeper Shimon Grubec 13 times. However, neither in the first period, nor even in the first half of the match, over 5 thousand spectators gathered in the arena did not see the goals.

The Ak Bars forward corrected the puck after Nikita Dynyak's throw so that it would pass through Grubec's ammunition, and became the author of the first KHL goal in the United Arab Emirates.

At the same time, the goal was not very consistent with the logic of the game - in the second period, Omsk had a huge advantage in shots.

In the final 20 minutes, both teams slowed down, but it was this period that became the most productive.

Stephen Kampfer and Mikhail Glukhov made two out of six shots from Kazan and secured the advantage of Ak Bars.

Avangard, having scored ten goals in the previous two matches, were able to score only one this time during the power play.

The final score was 3: 1 in favor of Kvartalnov's wards.

After the match, Ak Bars forward Artyom Lukoyanov said that hockey players would be happy if a local club appeared in the KHL, to which they could come to visit.

We arrived, it was time to walk, look around, sunbathe and swim.

In a short time, we managed to relax and play hockey.

It's great that Ak Bars won today, we are flying home in a good mood.

I think the players and coaches of the KHL clubs are in favor of creating a team in the UAE.

Previously, too, no one could have imagined that a hockey club would be created in Sochi, but they did.

When you arrive here, it relieves emotionally a little, ”said Lukoyanov.

Despite the defeat, Avangard also took the trip to the UAE positively.

So, striker Sergei Tolchinsky said that he used to believe in such a possibility.

“It's a pity that we lost, we didn't use our chances.

There were several unforced losses in their zone, "Ak Bars" punished us for mistakes.

The game was fast, not easy.

Playing in Dubai is an experience.

I would never have thought that it is possible to play hockey here, it will be remembered, of course.

It's hard to sit in a room, I want to lie under the sun, ”Tolchinsky noted.