The Russian men's tennis team has made it to the Davis Cup semifinals for the second time in a row. In the first round of the playoffs of the tournament, the national team confidently beat Sweden with a score of 2: 0. First, Andrei Rublev, in a bitter struggle, broke the resistance of Elias Imer. Then Daniil Medvedev in the second singles match without any problems dealt with his younger brother Mikael. The next rivals of Shamil Tarpishchev's charges will be the Germans. 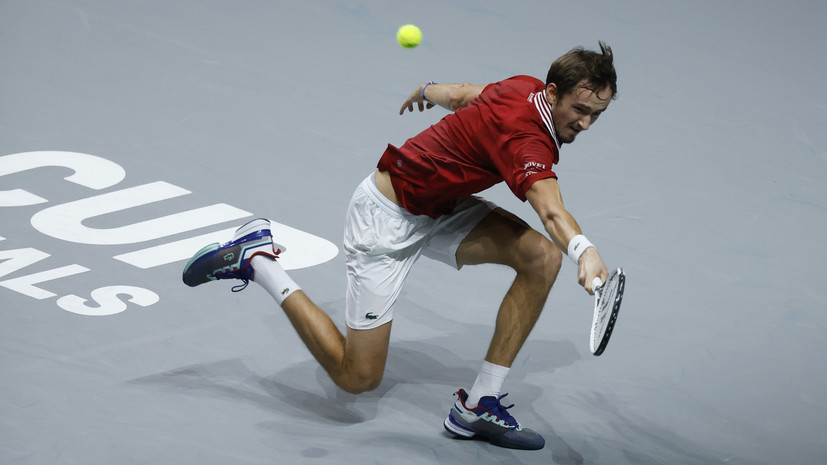 Russia approached the Davis Cup quarterfinals with Sweden as the clear favorite.

However, four three-set matches in the group stage and Andrei Rublev's not optimal form at the end of the season raised questions from fans and experts.

This is not surprising, because the second racket of the country in the confrontation with the Spaniards unexpectedly lost to 40-year-old Feliciano Lopez, for whom this victory was the first in a year and a half over a tennis player from the top 10.

At the same time, Andrei played as many as four games in two days, and many wondered whether Shamil Tarpishchev would decide to replace him in order to give him an opportunity to recover after such exhausting ordeals.

Nevertheless, the captain of the national team, apparently, decided that three days was enough for a rest, and put the best against the Scandinavians.

Obviously, the bet was made on victories precisely in single meetings.

At first, everything indicated that Tarpishchev was right.

He looked preferable on long rallies and allowed less waste at the net.

The opponent, on the other hand, often made unforced mistakes, which made it possible to complete the game with a solid advantage.

However, then the Swede came to his senses and immediately took someone else's serve.

Andrei, in turn, was not taken aback, making a reverse break, and then, it seemed, regained the advantage.

Rublev took the lead with a score of 5: 3 and filed for the match, but the opponent turned on again and won three games in a row, having given only four draws out of 16. In the decisive set, both tennis players squeezed out of themselves the maximum.

Each confidently acted on his serve and at the same time was unable to realize a break point.

Actually, the outcome of the tie-break meeting was being decided, where the Russian turned out to be more accurate.

In addition, the percentage of points won in the first serve for the 24-year-old tennis player was 77% versus 65% for the opponent, which was the key indicator.

However, Andrei was dissatisfied with himself, noting that once again, through his own fault, he brought the game to the third set.

According to him, this may be due to constant thoughts about responsibility for the result.

“It was very difficult, although I could have finished everything much earlier ... Why are the second sets more difficult? I think, first of all, it's about me. I don’t know how I managed to give in. He relaxed in his stupidity, made a mistake in those moments where it was impossible. Imer himself returned to the game, but he caught the courage and began to serve many times better. In the last two meetings, one really gets the impression that the opponents are playing the match of life with me. But again, I myself am to blame, "- said Rublev.

Next came Daniil Medvedev and Mikael Imer. The leader of the national team could only not let the partners down and save himself and them time for a full recovery. The winner of the US Open did not postpone the matter indefinitely and immediately began to dominate, realizing a break point at the start of the match. However, the underdog managed to impose aggressive tennis and equalized the score by the middle of the set after several unsuccessful exits to the net in the performance of the native of Moscow. It seemed that the Scandinavian even forced Daniel to feel not quite confident on the back line, but problems with his own serve did not allow Imer Jr. to completely turn the game around. Medvedev took advantage of the opponent's unforced errors, making a break with the score 4: 4, and then calmly gave the Swede.

The Russian started the second set even more actively.

He immediately secured a confident lead, was excellent on his serve and easily changed the direction of the blows.

Having won three games at the start of the game, Daniel relaxed a bit and allowed his opponent to return to the game.

This did not prevent Medvedev from leading with a score of 5: 2, but two double mistakes helped the opponent make another break, and then reduce the gap to a minimum.

However, in the decisive game, the Russian tennis player showed class and brought the matter to victory - 6: 4, 6: 4.

Having secured a ticket to the Davis Cup semifinals for the national team, the Russian drew attention to the problems with the first serve and stressed that in the semifinal match with Germany, which will be held on December 4, he will need to be in better shape to help the national team get to the decisive one for the second time in a row. stage of the tournament.

“Hopefully the next game will be better.

I trained with Ymer only once, and we never crossed paths in official meetings.

No matter how much I watch his matches and ask the guys who played with him, this is not the same as going to court myself.

Therefore, I tried to analyze everything during the meeting.

In fact, I liked Mikael's performance.

True, he was mistaken in some moments, due to which I won, ”Medvedev praised his opponent.

He also stressed that the Russian team feels at home in Madrid.

“We feel special emotions from playing for the national team.

It's great that we have a day of rest before the semi-finals.

So we will go out to the court fresh.

We won the group confidently and passed the quarterfinals.

So we are looking at the match with Germany with optimism, ”added the tennis player.