First came the nightmare message about the star defender's long-term injury. Then Örebro defeated Leksand 3-1. - We have been good defensively all season. We have trained on the offensive almost every day and I think it gets better and better, Örebro's scoring machine Robin Kovacs told C More. 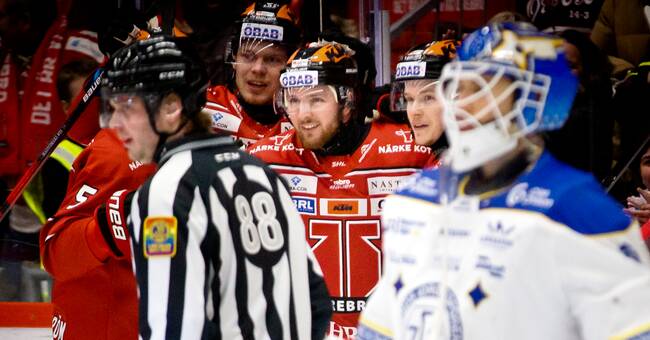 A couple of days ago, Örebro made a pale effort when the team fell to Brynäs after extra time (1-2).

In the same match, Rasmus Rissanen was forced to step down and on Thursday the heavy news came that the key and star hill will be gone for 3-4 months due to a posterior cruciate ligament injury.

Heavy break for Örebro who a few weeks ago also lost the hill Stefan Warg who went on to Djurgården.

- Over a longer period of time, we need to find a replacement, Örebro's coach Niklas Eriksson told C More.

But later in the evening, the home-strong Närkegänget could rejoice over a three-pointer against SHL's best away team in a sold-out Behrn arena.

And at the same time, Örebro made sure that Leksand's trend stopped at three straight victories in the SHL.

The home team came out strong.

After just over twelve minutes, Robin Kovac's goal scorer began when he sent the puck into goalkeeper Kasimir Kaskisuo's far cross after a beautiful pass from defender Nick Ebert.

- I had a similar shooting position in the change before, so I just tried to pinch it towards the far side, Kovacs told C More after the first period.

And Örebro's scoring machine, which is up to nine hits so far this season, was pleased with the home team's first period.

- I think we are on from the start.

We had talked about that, we had a pretty bad match last time against Brynäs.

"Does not give them space"

Early in the second period, it was the hard-hitting Nick Ebert's turn to thunder 2-0 into the crossbar from a difficult angle.

- I think we play stably.

We do not give them much space.

When we get the puck down deep, we can keep it there, Örebro's coach Niklas Eriksson told C More in the second period break.

Seven minutes into the third period, Max Veronneau was free - and the king of points then put 2-1 between the legs of Örebro goalkeeper Jhonas Enroth.

Leksand's red-hot forward thus scored for the fifth game in a row (7 goals).

But Joel Mustonen had to put an end to it when he completely free thundered in 3-1 with two minutes left of regular time.