Sebastian Samuelsson is in great shape. The 24-year-old won the World Cup sprint in Östersund again - for the second time in less than a week. - It is fantastic to see, says SVT Sports expert Helena Ekholm. 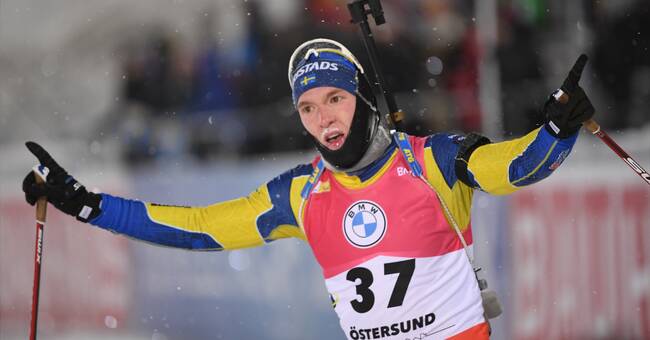 It may not have been quite as good in today's race in Östersund - but it was still an impressive victory.

Unlike last Sunday, when he shot full, Samuelsson blocked a shot in the horizontal shot.

But the ride was very strong and when he then shot full in the standing shot - at the same time as he put another gear in the ride - a victory was close.

The big competitor was Quentin Fillon Maillet, who started much later than Samuelsson.

The Frenchman was strong in the ride and threatened before the last shot.

But Fillon Maillet missed his last shot and Samuelsson's second sprint victory in less than a week was a fact.

What a brutal form of riding he has, says SVT Sports expert Helena Ekholm.

Martin Ponsiluoma, who had an extremely heavy time on the shooting range last weekend with as many as eight booms in the distance and as many as five in the sprint, took a step forward during the day.

Ponsiluoma impressed in the ride and had it not been for two booms, it would have been a top position for the reigning world champion.