The International Olympic Committee's video talks with the missing Peng Shuai were criticized by the WTA and Amnesty. Now they have a new video call with the Chinese tennis star, and plan to meet her. 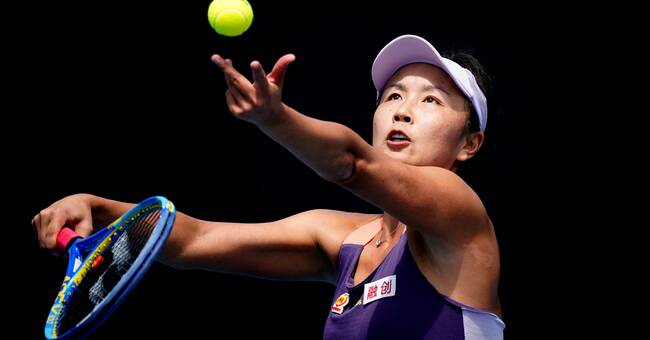 The International Olympic Committee (IOC) had a new video meeting with Peng Shuai on Wednesday and plans to meet the former double world set in tennis and the triple Olympian in January, the IOC writes on its website.

The news comes the day after the women's tour WTA announced that they are canceling their competitions in China after question marks over 35-year-old Shuai's health and freedom after she accused a high-ranking member of the Chinese Communist Party of sexual abuse.

"We share the same concerns as many other people and organizations," writes the IOC.

The IOC spoke to Peng Shuai in a video conference just under two weeks ago.

However, several tennis stars and organizations have not accepted the video as a guarantee of Chinese health.

The support of the stars

On Wednesday evening Swedish time, the WTA, the ladies' professional tennis tour, announced that they are canceling their planned competitions in China and Hong Kong after the controversy surrounding Peng Shuai.

This after the former world setter in double disappeared from the public eye after she on October 2 accused a member of the Chinese Communist Party of sexual abuse.

The WTA's announcement of a boycott is supported by the Swedish Tennis Association and several international stars.

"Brave decision by Steve Simon (CEO) and WTA where they put principles before $ (dollars)", writes Martina Navratilova on Twitter.

"I applaud Steve Simon and the WTA leadership for taking a strong stand and for defending human rights in China and around the world.

The WTA is on the right side of the story regarding help for our players ", writes Billie Jean King, who in the 60s, 70s and 80s fought for equality in tennis, on Twitter.

"I fully support the WTA line because we do not have enough information about Peng Shuai and her well-being," said Novak Djokovic in connection with the Davis Cup final in Madrid.