The state of weightlessness is erratic, and how do astronauts move in space? 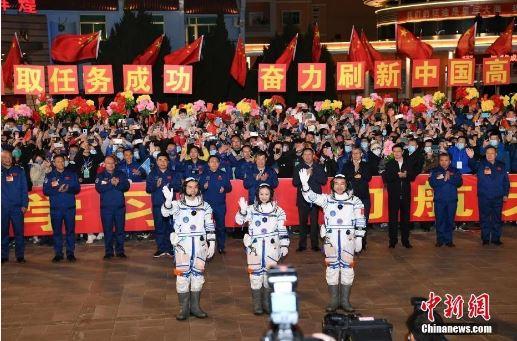 Data map: On October 15, 2021, Beijing time, the expedition ceremony of the astronaut crew of the Shenzhou 13 manned mission was held at Wentian Pavilion Square at the Jiuquan Satellite Launch Center.

A few days ago, the official blog of China Manned Space Engineering website released a fragment of the daily life of astronauts.

In the picture, they rotate, stand upside down, and float in the sky... Zhai Zhigang also staged a real "drifting over".

When Ye Guangfu was using the drinking fountain to collect water, because the aisle was blocked, Zhai Zhigang jumped up and floated behind his shoulder.

Since the three astronauts entered the space station, their lives in space have aroused people's curiosity.

In fact, in addition to the warm and funny picture.

How astronauts exercise in space has also caused discussion among netizens.

Compared with the earth, the way they move is refreshing.

Why do astronauts exercise every day?

After an astronaut enters space, a series of changes will occur in the body.

In the case of weightlessness, the astronaut’s cardiovascular system will change, muscles will atrophy, and bone mass will be lost.

As the flight time gets longer and longer, the impact of weightlessness on the body of the astronauts is also increasing.

However, astronauts will eventually return to live on Earth again one day. If measures are not taken to prevent or reduce these changes, astronauts will no longer be able to adapt to the gravity environment on the ground after returning to the ground.

Data map: At 9:50 on October 17, Beijing time, the Shenzhou 13 astronaut crew successfully opened the cargo compartment door and successfully entered the Tianzhou 3 cargo spacecraft to check and sort the contents of the cargo ship.

What are the ways to move in space?

According to reports, the space station has a dedicated exercise area where astronauts can exercise by riding bicycles and running on the space treadmill. These equipment are specially made.

This summer, the three astronauts of Shenzhou 12 took a "space walk" on the space station.

After installation, he put on a special vest and began to exercise.

Like ordinary treadmills, the space treadmill can also adjust the pace and frequency.

In addition to the space running platform, the "space bike" is also a favorite fitness equipment for astronauts.

Its shape is similar to a spinning bike in a gym. The principle is to use electromagnetic force or other methods to increase resistance.

Astronaut Tang Hongbo once demonstrated the use of space bicycles.

When riding a bicycle, Tang Hongbo's leg motion range is not static. This is to stimulate the astronaut's heart rate threshold by increasing different motion states and increase the cardiovascular adjustment ability.

Astronauts can also wear special respirators when pedaling to strengthen their cardiorespiratory function. In addition, there are special upper limb exercise mode devices to increase the overall exercise effect of the astronauts.

The tension belt is also an important equipment for space fitness. Just like on the earth, the tension belt can increase the resistance of the movement and help exercise muscle strength.

The astronauts of Shenzhou 12 have unlocked various movement postures.

Of course, every action they do has a scientific design plan.

Regular and consistent exercise can reduce the impact of weightlessness on astronauts.

According to reports, for long-term flight astronauts, their daily movement time is not less than two hours.

The "travel trio" of Shenzhou 12 used to play table tennis on the space station; the astronauts of Tiangong-1 would also engage in somersault competitions and exercise Tai Chi and so on.

To explore the vast universe, in addition to having excellent skills, of course, you must also have a strong body.

The future journey is long, and I hope that the astronauts will take care of their bodies while performing their missions.

Looking forward to the day when you return to the earth!