The rescue of Spartak in Ufa, the Lokomotiv fiasco in Tula and effective substitutions in Khimki: what will be remembered for the 16th round of the RPL

CSKA suffered its fifth defeat in a row from Zenit and cannot upset its principal rival for more than three years. Dynamo played for the second time this season during the match and achieved victory. Igor Cherevchenko and Viktor Goncharenko made three effective substitutions for two, and their teams staged a goal shootout. Spartak escaped defeat in Ufa in the 95th minute, thanks to a penalty kick implemented by Alexander Sobolev. Arsenal scored three goals against Lokomotiv and left the last place. What is the memory of the 16th round of the RPL - in the material RT. 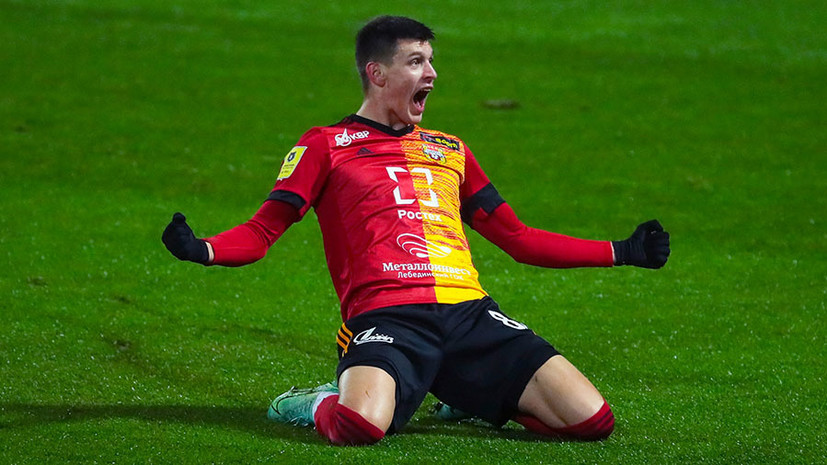 The inability to take "their" points in matches with inferior opponents in the class can be called a chronic illness of Krasnodar. The team is able to beat the grand, and then stumble in the confrontation with the outsider. This happened in the 16th round, when Viktor Goncharenko's wards, after a tough victory over Spartak, parted with Khimki - 3: 3. Moreover, the Moscow Region team stopped the venerable opponent for the second time this season. In the first round, he scored three points at all.

At first, nothing foreshadowed big problems for the guests. They opened the scoring at the beginning of the meeting and earned a penalty in the middle of the half. However, it was not possible to take advantage of the obvious chance. Surprisingly, in the current season RPL Krasnodar failed to score five penalty kicks out of nine appointed. For the first time, Grzegorz Krychowiak “smeared” his attempt. In the game of the first round, Ilya Lantratov also deflected a blow from the “point”, only from Viktor Klasson.

However, after the break, the course of the meeting changed completely.

The hosts were largely helped by the timely castling of Igor Cherevchenko.

In particular, with the appearance of Denis Glushakov on the field, the hosts established control over the ball and in just three minutes scored twice, taking advantage of the opponent's gross defensive mistakes.

The experienced midfielder himself scored, and now has seven goals in the current championship.

Aleksandr Dolgov also struck someone else's goal after coming on as a substitute.

Vladimir Ilyin, who entered the game instead of the injured John Cordoba, saved the Southerners from defeat ten minutes before the end of regular time.

After the 16th round, Dynamo finally established themselves as the main pursuer of Zenit.

This was facilitated by the misfire of Sochi in Yekaterinburg and the most important victory over Rubin by the blue and white themselves.

The fans have gotten used to the fact that Sandro Schwartz's charges are highly dependent on mood.

If they play, they leave no chance for any opponent, if not, they can give points to outsiders, which has happened more than once during the current season.

However, in Kazan, Dynamo proved to be a truly mature team, which has a champion character and is able to achieve success through “I can’t”.

A good start and a quick goal relaxed the Muscovites, and even in the first half they allowed the opponent to win back, and in the second - to take the lead.

Nicolo Moro's unrealized penalty was supposed to finally finish them off.

But the guests did not give up, but almost immediately scored after serving from the set.

Moreover, in the second round in a row, the newcomer Fabian Balbauna distinguished himself.

Having leveled the score, the team could afford to step back to defend a draw, but that was completely out of the blue-and-white spirit.

They only increased the pressure and in the 85th minute snatched their third victory in a row in the national championship, which became only the second strong-willed this season.

Earlier, Dynamo managed to turn the tide of the match by 180 degrees in the confrontation with CSKA.

In the event of Zenit's defeat in the derby with CSKA, Dynamo could reduce the gap with the Petersburgers to a minimum and actually revive the intrigue in the fight for the championship.

However, if in European competitions Sergey Semak's team does not succeed in everything, then in the RPL he once again showed himself to be a machine for the extraction of points.

Even when the blue-white-blue does not play, they win. This happened in Moscow, where the army team had more possession of the ball and missed several dangerous opportunities. The guests in the first half realized the first half-moment. And even then, the ball flew into the net after Claudinho's kick thanks to a ricochet from Igor Diveev's leg. And in the compensated time for the second half, Andrey Mostovoy, who came on as a substitute, put an end to it. According to the statistics of expected goals (xG), the reigning champion played only 0.93, but scored twice. The opponents showed a result of 1.36, but did not score.

It is significant that even if Zenit loses points, then in matches with rivals inferior to them in the class.

The defeat at Sochi and the draw with Lokomotiv stand apart in this regard.

Petersburgers have not lost to Moscow teams since August last year.

This series has 12 encounters in all competitions.

CSKA have turned into a comfortable opponent for the blue-white-blue.

They suffered the fifth defeat in a row in the confrontation with them and the third - at home.

The faded game of "Spartacus"

Other participants in European competition from Russia, Spartak and Lokomotiv, did not show themselves in the best way either. Both metropolitan teams have lost points in away confrontations with outsiders. At the same time, both Rui Vitoria and Markus Gisdol faced serious staffing problems. Mikhail Ignatov and Victor Moses made up the injured company in the red and white. As a result, Alexander Lomovitsky, who rarely appears at the base, is located on the right edge. On the one hand, in comparison with the victorious meeting with Napoli, there were only two changes, on the other hand, the Portuguese had no one to strengthen the game from the bench.

And the guests played an extremely nondescript game with Ufa.

There was a feeling that they had left all their emotions and forces on Wednesday at the Otkritie-Arena.

In the RPL, the team again appeared as the worst version of themselves.

In the first half, she did not strike a single blow on the target of Alexander Belenov's goal and barely broke into the rich defense of the opponent.

In the second, the favorite conceded altogether.

The goal coincided with the replacement of Nikolai Rasskazov, who made a number of productive mistakes this season.

So this time, as soon as he appeared on the field, the reservist missed Alexei Nikitin in his own penalty area and allowed him to finish off the ball into the net from close range.

After that, the defender lost control of his emotions and managed to earn two yellow cards in 14 minutes.

But in spite of everything, the Muscovites managed to escape.

Already in the time added by the judge, Nikitin turned from a hero into an antihero, hitting Alexander Sobolev in the jaw with his elbow.

Having looked at the replay of the VAR prompt field, Pavel Kukuyan pointed to the "dot".

The victim himself confidently converted the penalty spot and scored the fourth goal in ten days in all tournaments.

Spartak, however, increased the losing streak in the national championship to six rounds and remained on the tenth line.

And Lokomotiv on the day of cardinal changes in the management of the club was defeated by Arsenal, which was in the last line in the standings - 1: 3. The failure was caused, among other things, by a large number of losses. Young Daniil Khudyakov and Maxim Petrov were forced to appear in the starting lineup, and only one youth remained in the reserve, with the exception of Pablo. However, this does not justify the weak play performed by the Muscovites, who looked extremely toothless in attack and delivered only one shot on target per match.

But the Tula people calmly caught the favorite on quick counterattacks and could well have noted more than three times, if not for the saves of the 17-year-old goalkeeper of the guests. Evgeny Markov made a double. Daniil Khlusevich, who will move to Spartak in winter, opened the scoring and helped his teammate to excel. Moreover, the referee canceled another goal of the midfielder due to an obvious offside position. Finally, Kings Kangwa assisted partners twice.

Lokomotiv managed to avoid the rout only shortly before the final whistle.

After Vitaly Lisakovich served from the corner, Pablo sent the ball into the net.

However, it is unlikely that this greatly pleased the red-greens, who cannot win in all tournaments over the course of five matches.

All in all, under the leadership of Gisdol, they won only two victories - over Sochi and Nizhny Novgorod.

But the Tulyaks can be safely called the "threat of authorities", because in the current RPL draw they, in addition to Loko, took points from Spartak (1: 1), CSKA (2: 2) and Zenit (2: 1).

Moreover, all the favorites stumbled in Tula.