From the Olympic substitute to the World Table Tennis Championships, Wang Manyu walked to the center of the stage like this 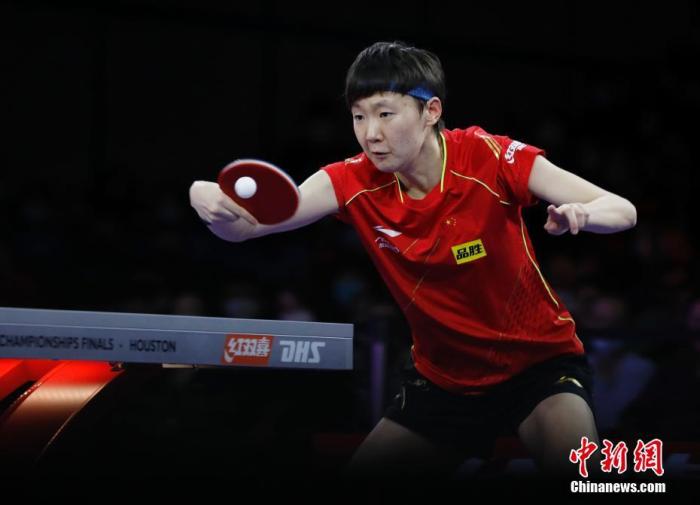 On the same day, in the women's singles semifinals of the 2021 World Table Tennis Championships in Houston, USA, Wang Manyu eliminated teammate Chen Meng 4-3 and advanced to the final.

After winning the championship, Wang Manyu sat on the ground and roared, and his long-suppressed mood was finally vented at that moment.

In this final, there was actually no loser.

This pair of teammates, who are so familiar with each other, have just fought side by side and jointly defended the honor of the National Table Tennis Women's Doubles.

In a blink of an eye, the two faced each other across the net, competing for the women's singles championship.

Throughout the game, the plot of tying, overtaking, and tying again has been staged.

In the process of your coming and going, what is tested is not only strength, but also mentality and perseverance.

After winning this hard-won championship, Wang Manyu has been on the highest podium in the Olympics, the National Games and the World Table Tennis Championships in less than five months.

But before that, she, who was extremely talented, had also struggled and lingered in the trough.

Many viewers know Wang Manyu since the Tokyo Olympics this summer.

Because of Liu Shiwen's injury, Wang Manyu, who played with a P card, was able to enter the team lineup.

Together with Chen Meng and Sun Yingsha, she won the first Olympic gold medal in her life.

That was the first time that Guoping used P card in the Olympic Games.

Some people say that Wang Manyu is really lucky to be on the highest podium in the Olympics for the first time.

However, opportunities are reserved for those who are prepared. From holding a P card to playing on the bench, Wang Manyu has experienced more than 700 days without a singles champion.

After winning two gold medals in women's singles and doubles at the Qatar Open in 2019, Wang Manyu, who had just started, failed to speed up.

In the face of Chen Meng and Ito Mima, Wang Manyu repeatedly fell into the wrong.

Because of the decline in state, Wang Manyu also lost the opportunity to participate in the 2020 World Table Tennis Championships.

While everyone else is making progress, Wang Manyu is still standing still.

In those difficult days, she told her coach Xiao Zhan twice that she couldn't hold on anymore, and the championship string in her heart couldn't hold back.

She said: "I feel that the flower I hope in my heart is dying."

On the same day, in the women's doubles final of the 2021 World Table Tennis Championships in Houston, USA, the Chinese team Sun Yingsha/Wang Manyu defeated the Japanese team Mima Ito/Hina Hayata to win the championship.

To this day, Wang Manyu still clearly remembers that Xiao Director told her: "If this tone is vented, people will fall too fast. So I have to persist."

Due to the new crown epidemic, the Tokyo Olympics were postponed for one year.

Wang Manyu has more time to check and fill vacancies and break through himself.

She has gained confidence through doubles matches one after another, but the failures in the singles match again and again have "to pieces" her intact.

Every single loss last year, Wang Manyu would "hate" himself from the heart: "On the road of competition, I can only win, and I can only prove myself with the championship, but I can't get it, so I hate myself. Hate. After that, I struggled to get up again and gave myself a little bit of courage to compete again, but failed to do it. Every time, it was a cycle of collapse, anxiety and helplessness."

After the roster for the Tokyo Olympics was released, Wang Manyu got the P card.

This is not the best result for Wang Manyu, who has always wanted to break through.

While preparing for Tokyo, she is also always ready to go up when the team needs her.

At this moment, Wang Manyu didn't want to prove anything to anyone: "I just want to be myself."

In the pre-Olympic simulation game at Nanyang Station, Wang Manyu, who only focused on the process and was no longer entangled in the results, finally overcame the demons.

She defeated Sun Yingsha and Chen Meng successively, and won the women's singles championship in the simulation tournament.

Although it is not a major international competition, for Wang Manyu, it represents a new life: "This champion has given me courage and confidence, and it feels like it has rekindled me."

Data map: On November 29, local time, Sun Yingsha (left) and Wang Manyu were in the game.

On the same day, in the women's doubles final of the 2021 World Table Tennis Championships in Houston, USA, the Chinese team Sun Yingsha/Wang Manyu defeated the Japanese team Mima Ito/Hina Hayata to win the championship.

Growing all the way

That victory injected confidence into Wang Manyu, and the flower in her heart reopened.

The growth of an athlete is inseparable from the support and investment of the family.

Since Wang Manyu was in contact with table tennis at the age of 5, her parents have been her strongest backing.

At the age of 9, the talented Wang Manyu was selected for the Heilongjiang Provincial Team.

In order to train their budding daughters into talents, Dad Wang and Ma Wang decided to sell their homes and accompany Wang Manyu to leave Qiqihar to Harbin, embarking on a road of hard work who understands the taste: Ma Wang is responsible for taking care of Wang Manyu’s food, clothing, housing and transportation. The important task of supporting the family is carried by Dad Wang alone.

Near Wang Manyu's training hall, Wang's father set up a small stall to sell peanut candy made by himself.

Later, due to unstable income, he simply switched to selling Roujiamo.

Seeing what his parents did for himself, the young Wang Manyu silently remembered.

No matter how hard or tiring the training is, she clenched her teeth and persisted, determined to live up to her parents' ardent expectations.

According to her enlightenment coach, Wang Manyu has worked very hard since she was a child, and took the bus to train by herself.

After training in the afternoon, I have dinner and continue to practice in the evening.

As long as the coach doesn't call to stop, she will never stop by herself.

Even if he is sick and has a fever, Wang Manyu will persist with the illness.

These days of bitterness and hope lasted for many years, until Wang Manyu stood out with talent and perseverance, entered the national youth team at the age of 14, played in the Table Tennis Super League and won bonuses, and the family's economic environment improved.

Despite this, the family's wish at that time was still to save money to buy a house in Harbin and find a stable place for this wandering home.

Repaying her parents and realizing her dream has also become the inexhaustible motivation for Wang Manyu to work hard, accompany her all the way through the barriers and stand out from the siege.

After the Olympics, Wang Manyu, who had been fighting continuously, moved to the National Games arena.

She took part in the women's team, women's doubles, women's singles, and mixed doubles four events in one go, and was called "iron man" by netizens.

In the mixed doubles final against Xu Xin and Liu Shiwen, Wang Manyu, who had been fighting continuously, injured her right leg. She could have chosen to retire to save her strength for the next women's singles competition.

But the stubborn Wang Manyu didn't want to let her teammates lose the chance to stand on the podium because she insisted on completing the game.

Although only one silver medal was won, Wang Manyu at this time had already shown a mature side.

After experiencing the loss and trough of 2020, Wang Manyu in 2021 is finally waiting for his own moment.

At the age of 22, she is still very young, energetic and powerful.

The story between her and table tennis has just begun, and in Paris three years later, I look forward to Wang Manyu's continued win.