Falck after the WC success with Karlsson: "My best friend"

They have known each other for more than half their lives. Now the childhood friends Mattias Falck and Kristian Karlsson have won a World Cup gold. - It is my best friend so it is clear that it means a little extra to win with him, Falck says to SVT. 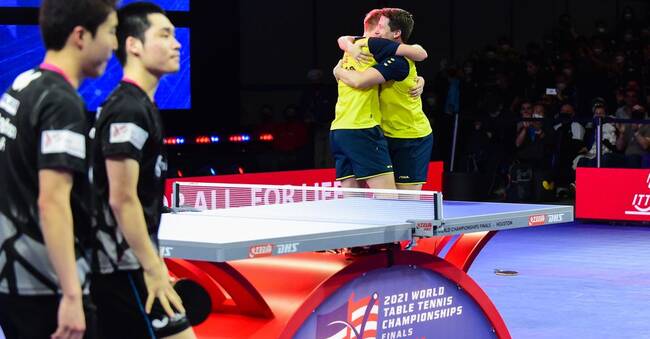 Sweden had a chance at two golds, when both Truls Möregårdh and Falck / Karlsson went all the way to the final.

It was a - 19-year-old Möregårdh had to settle for a silver after a final loss against world setter Fan Zhendong from China.

- It has been a fantastic tournament.

I am very proud of myself and my achievement, he says and pays tribute to the duo who a few hours earlier won the gold in doubles:

- I'm very happy to celebrate with these guys.

They are fantastic and a World Cup gold for them is fantastic.

What is the difference between you and the world setter?

- He was a much better player, quite simply.

He took my attacks very well and read me very well.

It was a very difficult match to play, but I enjoyed every second.

"Then it felt possible"

When SVT meets the blue and yellow trio during the team dinner, Mattias Falck says that he got a good feeling early in the WC.

- It was a perfect tournament on our part.

Already in the second match we switch up and come up to a very good level.

We felt together and the short lyre felt good.

In the quarterfinals, the pair really barked when world setter Fan Zhendong and Wang Chuqin, who were reigning world champions in doubles, were defeated.

- When we won it, we felt that this is possible, this can go the way, says Falck who says that it means extra to win the gold with Kristian Karlsson:

He's my best friend so it's clear that it means a little extra to win with him.

What does this gold mean?

- It's a little too early to answer.

We are very happy and very proud, it has been a fantastic World Cup for Sweden, but ask me again in two weeks when I have got some distance to it ... then I have a better answer, says Kristian Karlsson.