The Arab Football Cup, hosted by Qatar, is entering its second day today, as attention is directed to three great Arab teams, namely Saudi Arabia, Morocco and Algeria, participating in the second row, "the reserve", compared to 13 other teams participating in the starting lineup, at a time Missing the names of p 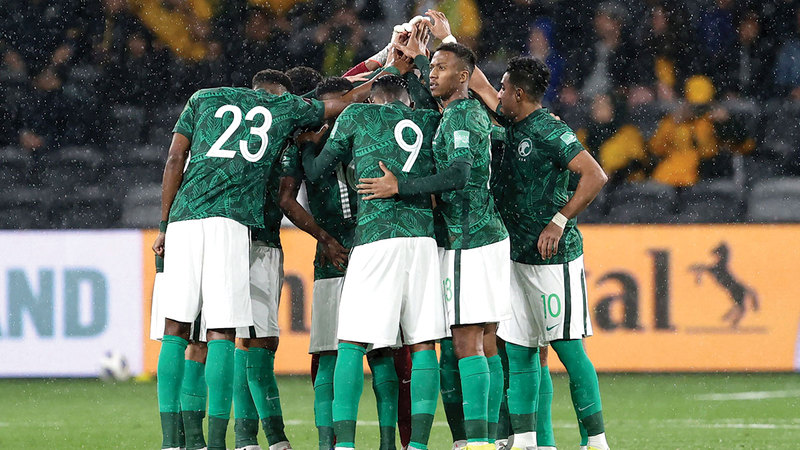 The Arab Football Cup, hosted by Qatar, is entering its second day today, as attention is directed to three great Arab teams, namely Saudi Arabia, Morocco and Algeria, participating in the second row, "the reserve", compared to 13 other teams participating in the starting lineup, at a time Glorious international names were absent from the Arab ceremony, led by the Egyptian Liverpool player Mohamed Salah, the English Manchester City player, the Algerian Riyad Mahrez, as well as the Moroccan star in Paris Saint-Germain, the Moroccan Ashraf Hakimi.

These teams have good luck in qualifying for the World Cup finals, as the Saudi team leads its group, and is a step away from direct qualification, while Morocco and Algeria enter the final stage of the qualifiers, and they are an extraordinary candidate.

The Moroccan team had previously won the championship title despite its participation in the reserve, in the last edition that was held in Saudi Arabia in 2012, under the leadership of Belgian coach Eric Gretes, and at that time defeated Libya on penalties.

The former Al-Ain player, Saif Sultan, who won the title of Arab club top scorer in the 1992-1993 season, said that the tournament "is an opportunity to expand the circle of international players, and not rely on the starting lineup that is participating in the current period, and that it was on the national team and the rest of the teams that participate in the tournament." Qualifiers for the World Cup, to give the opportunity to new players.

He confirmed to "Emirates Today" that "relying on a reserve team or a team that mixes experienced and new people, remains the best option."

Among the prominent names that will also be absent, the French Saint-Etienne striker, Tunisian Wahbi Khazri, and the Spanish goalkeeper of Seville, Moroccan Yassine Bounou.

The coach of the Saudi national team, French Herve Renard, entrusted the task to his compatriot Laurent Bonadi, with his role in the tournament as supervisory, which is the same approach adopted by the coach during his career with Morocco, when the "Atlantic Lions" participated in the African Cup for locals.

Saif Sultan, who was crowned top scorer for the Arabs after scoring 22 goals with Al Ain Club in 22 matches, said that the experience of some players in the main teams can help the newcomers at the beginning of their career, and it is also an opportunity to prepare the substitutes to make up for any absences that may occur.

It is noteworthy that the Saudi national team plays in the third group, and today it faces Jordan, and within the same group, Morocco will face Palestine, and in the fourth group will meet Algeria with Sudan, and Egypt with Lebanon.