The national team launches its Arab Cup campaign against Syria

Today, the first national football team begins its campaign in the Arab Cup, which will be held in the Qatari capital, Doha, with an important confrontation against the Syrian team, at 11 pm today, UAE time, at Ras Bouaboud Stadium in the group stage for the first group, which also includes 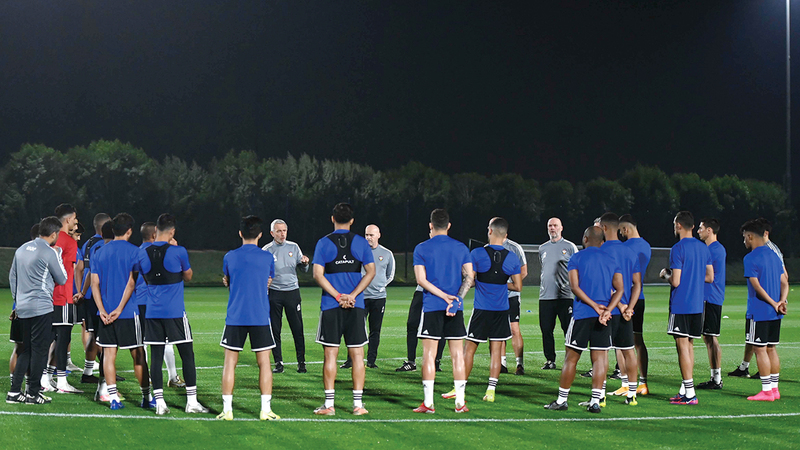 The national team launches its Arab Cup campaign against Syria

Today, the first national football team begins its campaign in the Arab Cup, which will be held in the Qatari capital, Doha, with an important confrontation against the Syrian team, at 11 pm today, UAE time, at Ras Bouaboud Stadium in the group stage for the first group, which also includes the Tunisian teams. And Mauritania, noting that the last meeting between the two teams was the first leg of the decisive round of the Asian qualifiers for the 2022 World Cup, which ended in a 1-1 draw, and the two teams will meet again on January 27 in the second leg.

The technical staff of the national team, led by Dutch coach Marvik, seeks, through the Arab Cup, to achieve four basic goals, represented by an honorable appearance, erasing the shaky image that appeared in the World Cup qualifiers, achieving positive results in the tournament, and preparing the team for its remaining matches in the World Cup qualifiers. After he renewed his hopes of competing for the qualification ticket through the third place gate, as well as reassurance of the players' readiness, and the opportunity for the largest number of substitute players in order to determine their technical levels.

The team witnessed the return of some influential elements, after they were absent in the past due to injury, such as Mahmoud Khamis, Walid Abbas and Shaheen Abdel Rahman.

Coach Marvik is counting on a number of winning cards, represented by Abdullah Ramadan, Ali Mabkhout, Caio Canedo and Ismail Matar, and the team loses in this tournament the efforts of its players Fabio de Lima and Khalfan Mubarak, due to injury.

Al-Abyad is playing this match with a new spirit, after achieving his first victory in the World Cup qualifiers in the last round at the expense of Lebanon with a clean goal, scored by Ali Mabkhout from a penalty kick, and raising his score to six points out of the six matches he played in the World Cup qualifiers. He has four confrontations against Syria, Iran, Iraq and South Korea.

The team prepared well for the tournament through a short camp that it set up in Dubai for two days before leaving for Doha, last Friday, where it completed its training for this meeting, and the team's list of participating in this tournament included 23 players.

The UAE and Syrian teams have never faced each other before in the Arab Cup, but they met on 13 different occasions, which witnessed a clear superiority of the UAE team with six victories, while Syria won on two occasions, and a draw in five meetings.

The first meeting between the two teams was on January 12, 1979, for the Asian Cup qualifiers, and it ended in a goalless draw.

The UAE national team is currently ranked 71st in the latest classification issued by the International Federation of Football, while it is the highest global ranking, reaching 40th in the world in November and December 1998.

23 years after the last participation, Al-Abyad returns to the Arab Championship, after qualifying directly to the group stage, after being among the best nine Arab teams in the FIFA classification.

Al-Abyad scored his first and only presence in Doha in the 1998 edition, where he eventually ranked fourth. The UAE was absent from the next two editions, in 2002 in Kuwait and 2012 in Saudi Arabia, because their dates did not coincide with the local agenda.

The UAE was present in the draw for the 2012 edition, before it apologized for participating, due to the presence of many injuries in the team, the delay in the end of the local season, as well as the presence of a large number of players in the Olympic team that qualified for the London Olympics.

Ali Mabkhout is the UAE national team's top scorer with 78 goals, followed by Adnan Al Talyani with 52 goals, and Ahmed Khalil with 51 goals.

On the other hand, the Syrian team, led by its new Romanian coach Tita Valero, who took over the task to succeed former coach Nizar Mahrous, includes a number of professional players, and in turn seeks to make an honorable appearance in the wake of the modest results in the World Cup qualifiers, as it occupies the last place in the group standings. The first with only two points, and the Syrian team is expected to witness impressive absences, most notably its striker Omar Al-Soma.

Kayo Kanedo: We are looking forward to Musharraf's appearance at the beginning of the journey

National team player Caio Canedo expressed his great desire to appear at an honorable level, accompanied by his fellow players in the Al-Obeid match against Syria, stressing the importance of achieving a positive result at the beginning of the journey.

Caio expressed his happiness to participate with Al-Abyad in this great tournament, pointing out that the presence of strong and experienced teams puts on their shoulders a great responsibility, to appear distinctively, and obliges them to provide everything they have in order to compete in this important tournament.