Hamdan bin Mohammed praises the participation of citizens, residents and visitors to Dubai in the "Fitness Challenge"

His Highness Sheikh Hamdan bin Mohammed bin Rashid Al Maktoum, Crown Prince of Dubai and Chairman of the Executive Council, praised the remarkable success of the fifth session of the Dubai Fitness Challenge, and the great achievement achieved by attracting a record number of participants that exceeded one million and 650 thousand participants of different ages and fitness capabilities. 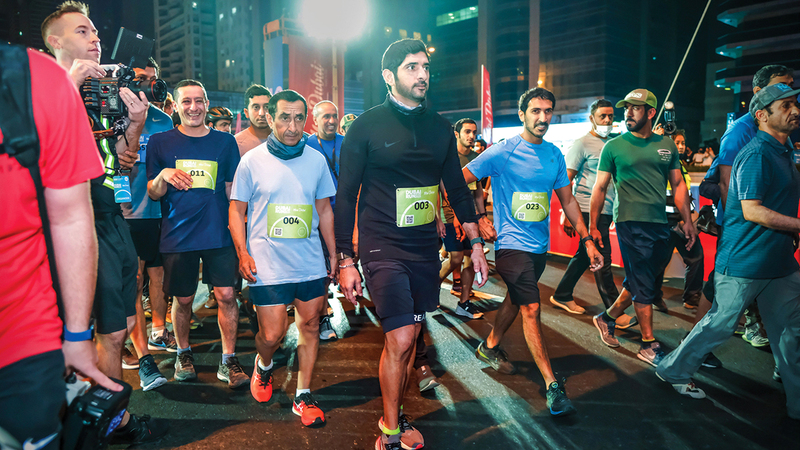 He called for the continuation of sports to make Dubai among the most active, vibrant and healthy societies

Hamdan bin Mohammed praises the participation of citizens, residents and visitors to Dubai in the "Fitness Challenge"

His Highness Sheikh Hamdan bin Mohammed bin Rashid Al Maktoum, Crown Prince of Dubai and Chairman of the Executive Council, praised the remarkable success of the fifth session of the Dubai Fitness Challenge, and the great achievement achieved by attracting a record number of participants that exceeded one million and 650 thousand participants of different ages and fitness capabilities, expressing His Highness He expressed his pride in the response shown by the participants, including citizens and residents, as well as visitors who were keen to participate in achieving the objectives of the challenge, and made Dubai one of the most active cities in the world over a period of 30 consecutive days.

His Highness praised the efforts of the organizers of the Dubai Fitness Challenge for its good organization, as well as for everyone who contributed to the success of this session, calling on all members of society to continue what they started during the challenge of keenness to adopt sports as a way of life, so that the Dubai community remains among the most Communities are active, vibrant and healthy globally.

The “Dubai Fitness Challenge” concluded its fifth session, after it contributed, over a period of 30 days, to transforming Dubai into one of the most active and vibrant cities in the world, with a wide range of fitness activities and activities that were made available free of charge in various parts of the emirate, to motivate and encourage members of society of different ages to continue Their commitment to the challenge that set a record this year in terms of the number of participants through thousands of events and fitness activities suitable for all.

The "Dubai Fitness Challenge" initiative, launched by His Highness Sheikh Hamdan bin Mohammed bin Rashid Al Maktoum, in 2017, aims to enhance Dubai's position as the most active and happiest city in the world, as it has become an anticipated annual event, with an open invitation to all to engage in sports activities throughout the year. whole month.

The last weekend of the challenge witnessed the participation of more than 146,000 people in the "Dubai Run Challenge", which was held last Friday on Sheikh Zayed Road;

To be the largest running event in the world.

This session of the challenge, which was held from October 29 to November 27, was more diverse and comprehensive than any previous session, through the launch of three fitness villages in Kite Beach, Expo 2020 Dubai, and the National Park. Mushrif”, in addition to 14 fitness centers across the city, and two major events on Sheikh Zayed Road, the “Dubai Cycling Challenge” and the “Dubai Running Challenge”, as well as the contribution of more than 40 partners in organizing sporting events and more than 10 Thousands of free fitness classes. The villages and fitness centers were able to attract more than 230,000 participants who experienced a wide range of various sporting activities and events.

For his part, Executive Director of the Dubai Festivals and Retail Establishment, Ahmed Al Khaja, said: “Over the past five sessions, the Dubai Fitness Challenge has succeeded in emphasizing its importance with the increasing number and demand to participate in the challenge every year. It was inspiring for all of us to witness a new record with the participation of more than 1,650,000 participants this year; Including 33,000 cyclists in the (Dubai Cycling Challenge), and 146,000 people in the (Dubai Running Challenge) on Sheikh Zayed Road. There is no doubt that this wide participation by different groups of society confirms the growing awareness of the importance of practicing sports and making it a way of life, especially since Dubai is the only city in the world that offers its residents and visitors a full month of comprehensive and free fitness activities, and I would like to thank everyone who contributed to the success of The fifth session of the Dubai Fitness Challenge, and making it a special event, and I feel proud to be a contributor to its success.” For his part, the Secretary General of the Dubai Sports Council Saeed Hareb said:“With this achievement, we have once again demonstrated our shared commitment to making physical and mental health a special priority in our daily lives. This pioneering initiative gave everyone the opportunity to experience the state-of-the-art fitness facilities scattered throughout the city, and encouraged them to challenge themselves to reach new goals and adopt a healthier and more active lifestyle. We were pleased with this wide participation, which indicates the growing awareness among Dubai residents and visitors of the importance of sports, and their real commitment during their participation in the challenge, which also resulted in the achievement of a new achievement, the first of its kind in the world, through the participation of more than 146,000 people. In (Dubai Running Challenge), which is the largest running event in the world. At the conclusion of the fifth session, I would like to thank everyone who contributed to this success and achievement.” It is noteworthy that the sixth edition of the Dubai Fitness Challenge will be organized from October 28 to November 26, 2022.

• 33,000 cyclists participated in the fifth edition of the "Dubai Cycling Challenge".