A gift from Mourinho, Pavlyuchenkova's confession and Ronaldo's response to Pink's request: sports events of the week

Igor Akinfeev starred in the television series of the lead singer of the Hands Up group, Cristiano Ronaldo promised to send autographed T-shirts to children for Christmas, and Jose Mourinho presented the young Roma footballer with expensive sneakers. Daniil Medvedev got on the pages of a glossy magazine, and Anastasia Pavlyuchenkova told how she wanted to use the racket for other purposes. Kirill Kaprizov celebrated Thanksgiving for the first time, Tottenham received a box of ketchup as a gift, and the Northern Ireland team received more than 9 kg of Swiss chocolate. Near-sports events of the week - in the material RT. 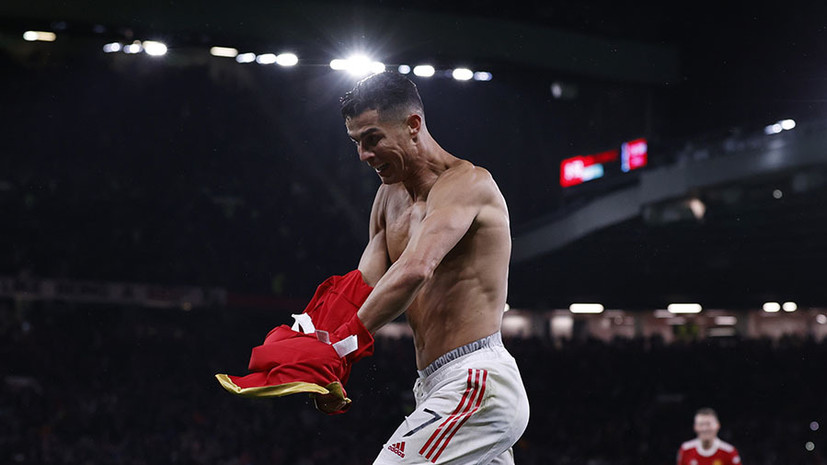 Italy's Roma head coach Jose Mourinho gave the team's 18-year-old striker Felix Afena-Gyan after his double at the end of the Serie A match against Genoa (2-0).

The broadcast showed how, after the first goal scored, the striker ran up to the coach and said something to him.

“I promised him a very expensive pair of shoes, for € 800, and he came over to remind me of it so that I certainly wouldn't forget,” Mourinho explained after the match.

And the next day, Afena-Gyan posted a video on Instagram in which Mourinho hands him the promised gift.

You will be proud of me, ”the footballer signed.

- sounded at the moment when Afena-Gyan opens the box.

To some viewers, this phrase seemed racist, and the Ghanaian footballer had to explain to the agitated public that this joke did not offend him in the least.

“I want to assure everyone that I was not offended by this remark, it is not racist in its essence.

From the first day I was accepted in "Roma" as a family member, and the guys just made fun of me, as happens in families.

I eat a lot of bananas, and sometimes we laugh at it, ”- quotes Afena-Gyan Vocegiallorossa.

The goalkeeper of CSKA Moscow Igor Akinfeev starred in the series of his old friend, the lead singer of the group "Hands Up" Sergei Zhukov.

A video appeared on the Internet in which Akinfeev with dreadlocks and in a reggae hat sings a song dedicated to football.

As it turned out, these are footage from a new television series.

“I really sang a song written by my friend Sergei Evgenievich Zhukov.

Only he could persuade me to such an adventure - not only to sing, but also to star in the series.

The series is called "Evgenich" and will be released in December on the "Friday" TV channel.

This is not Akinfeev's first acquaintance with the world of show business.

The army goalkeeper has already sung a duet with Zhukov and starred in videos for his songs "My friend" and "She kisses me."

Ronaldo will donate t-shirts to children at Pink's request

Manchester United striker Cristiano Ronaldo has agreed to participate in a charity event organized by the American singer Pink.

The winner of numerous awards and prizes reached out to the Portuguese footballer on Twitter.

This year I am organizing Christmas presents for a few kids and they want nothing but your play shirt ... I am determined to make their wish come true.

Would you send me a couple to change their lives?

I know you are constantly doing amazing things, but ... ”, - wrote the singer.

Ronaldo's answer was not long in coming.

No problem sending some autographed T-shirts for these kids.

It's great that everything worked out, ”wrote the European champion.

Hi @Pink - am happy to help - I will organize some signed shirts for these kids no problem.

Congratulations on making this happen!

Medvedev starred for Tatler with his wife

The second racket of the world Daniil Medvedev and his wife Daria, a former tennis player, gave their first joint interview for the gloss - a large publication was published in the December issue of Tatler.

In particular, the couple talked about how their romantic relationship began.

Young people had known each other since the age of 12 and from time to time talked, speaking at the junior level, and then Daria retired and entered MGIMO.

Once she needed a dress for a gala event, for which the girl's mother sent her to her friend in Nice.

Medvedev lived and trained nearby - in Antibes.

“Dani had his birthday at about the same time.

I flew in for a couple of days, we had dinner, noted, and talked.

Since then, everything has begun to develop somehow, "the publication quotes Daria as saying.

Dasha and Daniel got married in September 2018, and this year the tennis player "gave" his wife the first victory in the Grand Slam tournament - US Open on her wedding anniversary.

Anastasia Pavlyuchenkova spoke about a long-standing conflict with American tennis player Sloane Stevens, which almost escalated into a scuffle on the court. It was the first round match of the 2018 Beijing tournament. The Russian woman won the first set with a score of 7: 6, and in the second game, feeling a pain in her shoulder, she invited a doctor to the court. After a medical break, Pavlyuchenkova managed to win two games in a row, which caused strong indignation from her rival.

“She started screaming that I had no injury.

Here, they say, look how the physiotherapist helped her!

I have steam from my ears.

I lost the second set, and after that I went to her side and started yelling at her.

The judge came down and began to separate us.

I really thought I was going to hit her with a racket.

At some point I just lost (control. -

) ", - said the 11th racket of the world in an interview with Sofya Tartakova.

The athlete admitted that on the court she was "ready to kill an opponent."

“Many do not know me from this side, but I am very aggressive, thanks to which I win a lot of matches.

I was taught from childhood to do everything for the sake of victory, ”she added.

Pennetta and Fognini have their third child, and Chan has their first child.

The tennis players Fabio Fognini and Flavia Pennetta had a daughter, Flaminia.

This is the third child of the star couple; they are also raising their son Frederico and daughter Faro.

Many famous athletes congratulated him on the significant event, which the happy father shared on Instagram, including the world champion Francesco Totti, the ex-first racket of the world in a pair of Robert Vinci, as well as the Olympic swimming champion Federica Pellegrini.

He posted on the social network a photo with a baby carriage, accompanied by the caption: "Testing a new vehicle."

As it turned out, the firstborn in the family of Chan and his wife Elizabeth Putnam was born back in September, but the couple did not advertise this event.

It is only known that this is a boy.

Whims ate at a party, and the players of Tottenham are on a diet

The dinner party took place on the eve of the NHL match between Wild and Winnipeg (7: 1), in which the Russian became the first star of the meeting, gaining 4 (1 + 3) points.

So today I felt a little heavy in the morning.

I celebrated this holiday for the first time.

There was a lot of food there.

Spurge is very good at home, ”the official website of the NHL quotes Kaprizov as saying.

But the players of the English "Tottenham" have only to dream about the holiday of the belly.

The new head coach of the team, Antonio Conte, has introduced strict dietary restrictions for the players.

The Italian forbade them to eat heavy foods and sandwiches, as well as ketchup and mayonnaise.

This became the reason for many jokes on the net, and the Austrian sauce company Curtice Brothers went even further and sent a box of ketchup to the club.

At the same time, an advertisement appeared in one of the newspapers in the form of an open letter to Conte.

We heard that you banned ketchup.

We welcome your decision.

Eating is important, but so is joy.

Do you know that you are also from Italy?

Not all ketchups are created equal.

Therefore, you should not write them off, "- quotes from an advertisement for Sports.ru.

The head coach of the Swiss national team, Murat Yakin, seems to be more loyal to the players' diet.

After the final matches of the 2022 World Cup qualifier, he sent 9.3 kg of chocolate to the Northern Ireland national team - in gratitude for a goalless draw with Italy in the last round of the group stage, which allowed the Swiss to win a direct ticket to Qatar.

We kept our word, @NorthernIreland 😉 A sweet Thank You is on its way!