Los Angeles Lakers superstar LeBron James only managed to come back from his first career suspension before he got into trouble with the NBA management. Now he is fined for an "obscene" gesture of victory and warned of swearing. 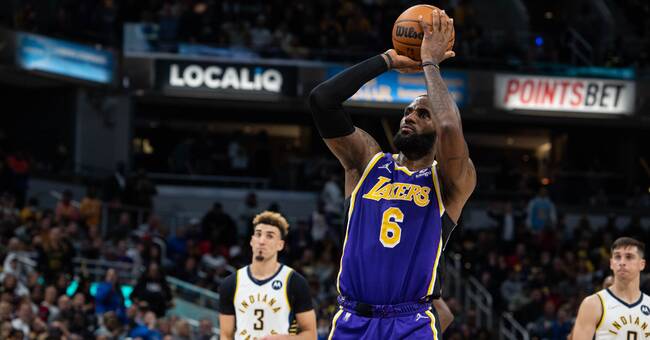 In the final minutes of the Lakers game against the Indiana Pacers on Wednesday, James celebrated a three-pointer with a dance that the league calls "obscene".

The increase costs James a fine of the equivalent of close to SEK 140,000, writes nba.com.

He also received a warning after swearing when he was asked questions about the fine during the press conference after the match.

Earlier this week, James was punished for unsportsmanlike conduct on the field during a match against Detorit last weekend.

Then there was a suspension without pay in a match - Tuesday's meeting with the New York Knicks that the Lakers lost 100-106.

And the "dance" itself then?

It can be described as some big wide-legged jumping steps with hands cupped in front of the writing.

Among others, Toronto's Fred VanVleet has previously been fined for making the gesture that is usually called the Sam Cassell dance.

Over the years, players have used "dance" as a gesture of victory after making important or difficult shots, but it was not until the 2010-2011 season that the NBA began handing out fines for it.

- It's so stupid to take someone's money for that.

It's not like giving someone the finger, Cassell said in an interview with The Athletic 2019 that the NBA fines the gesture.

For LeBron James in particular, the cure does not hurt too much.

He has an annual salary of the equivalent of close to SEK 380 million.