World record and flawless Liza: how Valieva and Tuktamysheva performed at the Grand Prix stage in Sochi after a long pause

Kamila Valieva won the short program of the final stage of the Grand Prix in Sochi, setting a new world record - 87.42 points. Elizaveta Tuktamysheva showed the second intermediate result, reminding herself of the sample of the 2015 champion year. Both Russian athletes returned to the ice a month after their last performance at Skate Canada. Another hostess of the competition, Maya Khromykh, was in fourth place due to the fall. 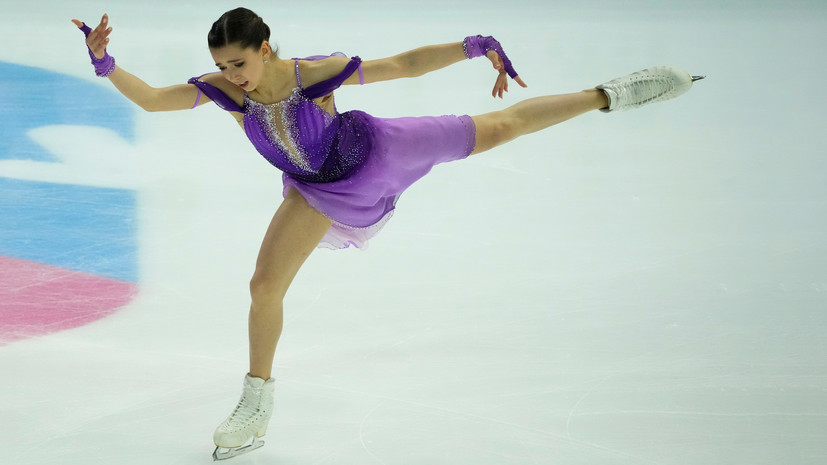 The home tournament for Russian figure skaters in Sochi brought together world champions in pair skating Anastasia Mishina - Alexander Gallyamov, holders of the highest world title in dance Victoria Sinitsina - Nikita Katsalapov, leader of the current season in women's skating Kamila Valieva and two singles who are most likely to compete for places in Olympic team - Mikhail Kolyada and Evgeny Semenenko.

Perhaps the spectacle lacks a bit of rivalry. This was especially felt in the duet forms: in terms of the level of skill, no one objectively compared with the Russian leaders either in dancing or in pair skating. Even the intermediate victory in pair skating of Daria Pavlyuchenko - Denis Khodykin was not pulling into a more or less suitable intrigue: they were 0.27 points ahead of Mishina and Galliamov, but this could hardly be called valor - the reason for the defeat of the world champions was the gross and not very typical to the leaders the mistake of the partner in the triple salchow.

The short program for men turned out to be a failure for the Russians at all: Kolyada, Semenenko and Mark Kondratyuk could (and should have) competed for the first three positions, but in fact they took 4th, 7th and 11th places.

“We all skate one program out of two.

We definitely need to drive ourselves into a state of "nothing to lose".

Without it, nothing comes of it.

It was like that for me - and the guys seem to be the same ... ”, - four-time Russian champion Maxim Kovtun commented on their performance.

And only the female composition of the participants with Kamila Valieva, Elizaveta Tuktamysheva and Maya Khromykh guaranteed the audience the highest level of competition.

In an interview on the eve of the stage in Sochi, Olympic champion Oleg Vasiliev noted that he considers the most difficult task to be the ability of the skater to maintain the highest possible shape throughout the season.

In part, this was the reason for the noticeably increased interest in Valieva and Tuktamysheva: the world had not seen either one or the other figure skater for almost a month - since the second stage of the Grand Prix in Vancouver.

It is interesting that in the short program the figure skater's record did not reach the world one - the highest achievement in this form was still held by Alena Kostornaya (85.45).

But this only added to the spectacle of pepper: a performance in the home arena could well have made Camila the owner of all the highest achievements.

“Any coach always keeps in mind the ideal of a skater - flawless in jumping, sliding, in presentation.

When I watch Valieva skate, I understand: here he is, the revived ideal.

It is a great happiness to see such skating in reality, ”said Alexander Vedenin, a well-known figure skating specialist.

According to the coach, gaining sliding speed without applying any visible effort has always been considered a great art among skaters.

This is exactly what Valieva demonstrates on the ice.

“Camila has a place in the program where she does a freewheel, then lifts her free leg into an arabesque and at that moment accelerates. For many years I taught people to ride, I know absolutely everything about the elements, and I can explain in the most detailed way in theory how you can achieve such an effect. But when I see this girl doing it, I catch myself thinking that I can’t believe my eyes. Her high jumps cause the same feeling in me, ”added Vedenin.

As a result of the performances of the first group, Mariah Bell took the lead.

The strongest warm-up began with the rolling of the Moon Hendrix.

The Belgian made a splash this season, winning the short program at the Grand Prix stage in Turin against world champion Anna Shcherbakova and Maya Khromykh and taking the overall third place, but the skater was less fortunate in Sochi.

She made a mistake on the landing from the second jump in the lutz - toe loop cascade and jumped a butterfly instead of a triple flip.

A total of 64.44 points, and Luna skated not only for Bell, but also for Canadian Madeline Shiraz.

The first really strong impression of the day was the first minute and a half of Khromykh's performance.

But in the second half of the program, Maya fell from a triple flip and was left without a cascade, losing 7.32 points to her result in Turin.

Kostornaya's world record that evening nevertheless fell, moreover, crushingly: Valieva flawlessly performed all the elements, including the triple axel, and scored 87.42 points - an amount that neither Tuktamysheva nor anyone else could objectively compete with at any rental ...

But this did not detract from the enthusiasm for the ex-world champion: Lisa, like Camila, perfectly performed the entire jumping part of the program with a triple axel, recorded the highest difficulty levels in all non-jumping elements, exchanged 80 points, coming close to her own record, and recalled the very Lisa-2015, who confidently walked through the season through many starts to her victory in the world championship.