Peaceful start: Nepomniachtchi and Carlsen tied the first game for the chess crown

Ian Nepomniachtchi and Magnus Carlsen drew in the opening game of the World Chess Championship match. The Russian athlete possessed white pieces and had an advantage of one pawn for most of the fight, but failed to convert it. The first of 14 encounters ended on move 45. 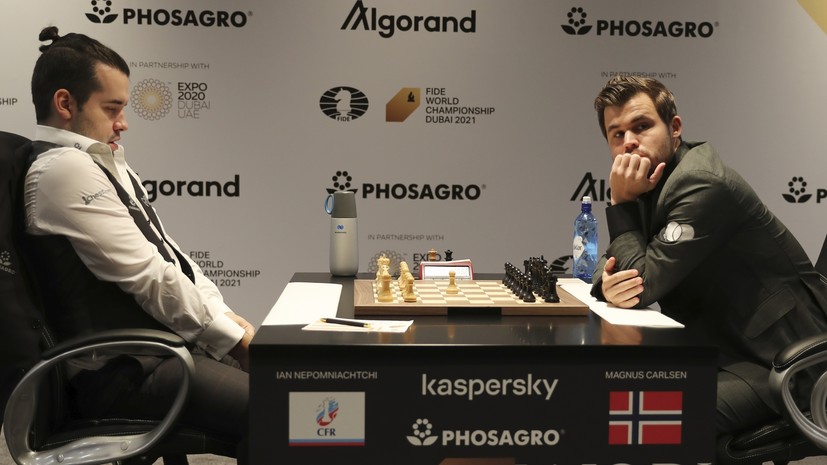 World title matches can rarely please with a vigorous and productive start.

The last time the first game was won by the Bulgarian Veselin Topalov was when he challenged the Indian Viswanathan Anand in 2010.

True, that success did not help the challenger to win the chess crown.

Since then, each of her new draws began with draws.

The beginning of a new battle between Norwegian Magnus Carlsen and Russian Jan Nepomniachtchi was no exception. According to the results of the draw, the Russian got white pieces in odd parties, so it was he who had to set the tone for the whole match. After a symbolic move by FIDE President Arkady Dvorkovich, the Russian chess player moved his pawn to e4. The opponents quickly played the Spanish game with the Berlin Defense.

On the eighth move, Nepomniachtchi could have launched Marshall's well-known counterattack, but chose the “anti-Marshall” line, moving his pawn to h3. At that moment Carlsen was on the sidelines of the board and did not immediately react to the move, while Nepomniachtchi immediately left for a short break. For a while, both chairs of the contenders for the championship crown were empty. Carlsen returned a few seconds later and left the pawn on e5 open anyway, and the Russian took it. The knight protecting her continued to move forward and exchanged for a light-squared bishop.

After that, Carlsen proposed an exchange with the central pawns and thus brought the queen to d5. It is interesting that at that moment the Norwegian had a chance to checkmate in one move if he continued to move towards the king on g2, but Nepomniachtchi, of course, saw this and was not going to make a stupid mistake. He closed the king with his queen, and then completely surprised him with an unusual move, moving his vulnerable piece to the free square f1. The Russian could have proposed an exchange of queens, for which he was quite ready, but decided to postpone.

This movement slightly surprised Carlsen, and he thought hard about his further actions. The Norwegian decided to move the rook to b8, and this moment was not immediately noticed by the fans watching the broadcast. The fact is that there was a glitch in the electronic version of the broadcast, due to which Carlsen allegedly made a senseless move to c8 and hid rook by pawn. But it was the computer's fault, not the world champion's. After that, Nepomniachtchi nevertheless exchanged queens.

Although the Russian had a slight advantage due to an extra pawn, he began to think about his moves much longer than Carlsen. He had the opportunity to aggravate, taking out the second knight, but in the end he decided to pull back another similar piece, not becoming substituted for the active position of black. After a pause, connected with Carlsen's long thoughts, the rivals once again exchanged, leaving a knight and a pair of rooks on the board. Nepomniachtchi's advantage had evaporated by that time, although the players were equal in time control.

By the end of the two hours allotted for the first 40 moves, Nepomniachtchi made an attempt to reduce the game in his favor.

He smashed the doubled pawn that was blocking him, allowing Magnusen to take one of them.

The Norwegian almost found himself in time trouble, but managed to get out of the active pressure of the Russian, which consisted in the active use of the rook and knight.

Nepomniachtchi still did not find a continuation for himself, and offered a draw on move 45, which was accepted.

After his first game for the chess crown, the Russian admitted that he would still like to realize the advantage of White's pieces.

He admitted that he was ready for Carlsen's actions, but it was too difficult to benefit from them.

“It will be better to save strength after the match, now what is the point of saving?

It was a normal game, the opponent played well, and applied a rather interesting idea.

I was familiar with her, but this is not enough, we still have to try to create problems.

A normal working party, but when you play with white, you want more.

You can always play as actively as your opponent allows.

Magnus chose a very reliable opening, in ten moves it turned out to be an endgame with an extra pawn for me, but it was very difficult to extract something from it.

There is some compensation and a position of dynamic balance, but no one was particularly active, ”Nepomniachtchi said after the game.