Patricia Berghult before the World Cup fight: "There will be fireworks"

It's been two years since boxer Patricia Berghult's last match. But on Saturday, the undefeated Swede is back in the ring against Olivia Belkacem - and then has the chance to win the WBC's vacant world champion belt in super welterweight. - The two-year wait is over. Hopefully there will be fireworks, says Berghult to SVT Sport. 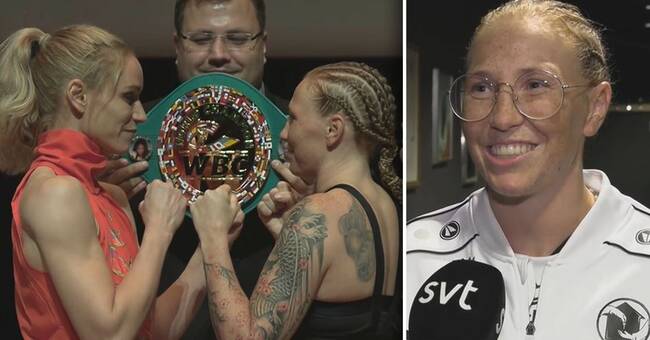 The last time Berghult played a match was on 27 November 2019 when she won the WBC's interim belt in super welterweight (69.9 kilos).

Since then, she has been searching with light and lantern for worthy opponents for a World Cup match, but the pandemic and canceled matches have made her go two years without competing.

On Saturday, it's time again when she faces the Swiss Olivia Belkacem who has ten victories in twelve professional matches.

And today, Friday, the boxes weighed into Kulturhuset Spira in Jönköping.

- Right now I just want to get this day completed and go up in the ring.

I am full of expectation.

It is exactly two years since my last match and it is clear that I wonder if I am ring rusty, says the 27-year-old and continues:

- I have prepared well and got together 300 rounds of sparring.

It's not the same as going to a match, when the nerves play a big role, but even if it takes a round or two, I will probably find it quite quickly.

"Audience support in the back"

Berghult has played 14 matches so far in his career and won all of them.

But Saturday's clash may be classified as her biggest.

She then gets the chance to box for the full WBC world champion belt since the American star Claressa Shields changed weight class and left the title vacant.

Initially, the plan was that she would have boxed in Canada this summer against former world champion Marie-Eve Dicaire, but that match was canceled at short notice.

- It was sad not to be allowed to go to Canada and box there, but this is still home ground and there will be many from Malmö and Örebro cheering on me so I will feel the public support in the back, she says.

"The belt will go home"

The opposition is led by 40-year-old Swiss Olivia Belkacem.

- She has been European Champion so it is not a pigeon.

She still has ten wins in twelve matches and will probably go to war, but we are prepared for that.

She is taller than I am, but I will be stronger and faster, says Berghult.

How does Saturday's match end?

- With me taking the belt home.

In what way remains to be seen, but the belt will go home.

"Do not want to win anyway"

Olivia Belkacem tells SVT Sport that she wants to offer a technical fight and show what two of the world's best women boxers stand for.

- For me, it is very important to offer a high level and technical boxing.

I am a tall and very technical boxer and want to show the Swedish audience the most beautiful boxing.

To win is prio one, to box beautifully prio two?

The match between Berghult and Belkacem is expected to start around 21.00 on Saturday night.