&nbsp;His Highness Sheikh Hamdan bin Mohammed bin Rashid Al Maktoum, Crown Prince of Dubai and Chairman of the Executive Council, presented this morning, Friday, 146 thousand participants in the "Dubai Running Challenge", the largest running event in the world, at the end of the final week of the fifth session of the Dubai Fitness Challenge; The initiative he launched 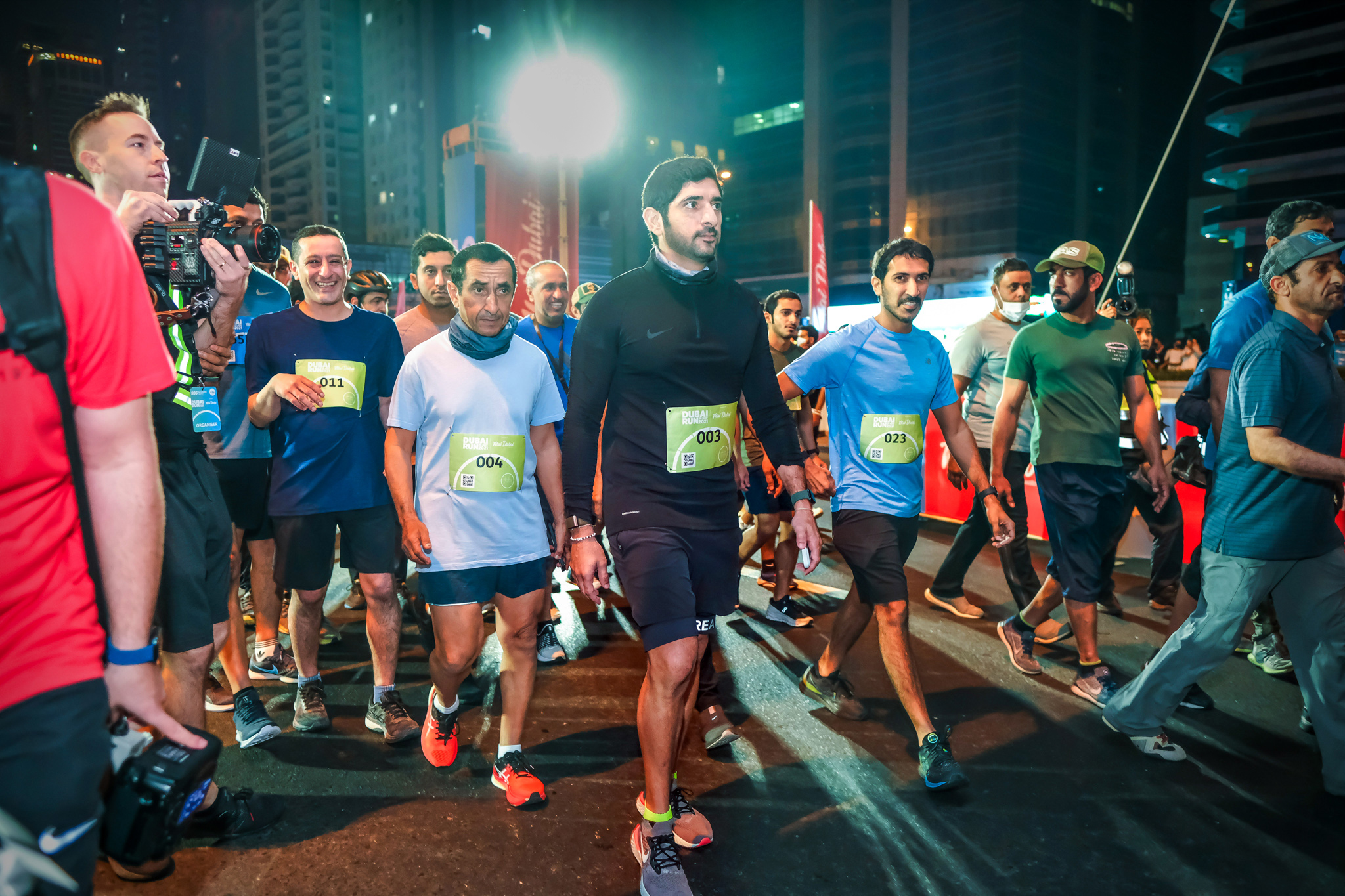 His Highness Sheikh Hamdan bin Mohammed bin Rashid Al Maktoum, Crown Prince of Dubai and Chairman of the Executive Council, presented this morning, Friday, 146 thousand participants in the "Dubai Running Challenge", the largest running event in the world, at the end of the final week of the fifth session of the Dubai Fitness Challenge;

The initiative launched by His Highness with the aim of achieving the vision and directives of His Highness Sheikh Mohammed bin Rashid Al Maktoum, Vice President and Prime Minister of the UAE and Ruler of Dubai, may God bless him, to make Dubai the healthiest, most active and happy city and the best for life and work in the world.

His Highness, the Crown Prince of Dubai, expressed his pride in the great response and honorable community participation on the part of Dubai residents and their keenness to participate in the largest community sports event of its kind in the world, praising their commitment to adopting a more active lifestyle to make Dubai one of the healthiest and happiest cities.

His Highness stressed his appreciation for the growing societal awareness of the importance of practicing sports, which is evidenced by the great demand for sporting events organized by Dubai, which contribute to making it one of the healthiest and happiest cities in the world, praising the efforts of those in charge of the “Dubai Running Challenge” and the Events Insurance Committee. , because of the good organization of the great event, as well as for everyone who contributed to the success of the challenge.

Dubai is the only city in the world that offers citizens, residents and visitors a whole month of comprehensive and free fitness activities, including the “Dubai Running Challenge”, while taking all necessary precautions and measures to maintain the safety of participants and community members during the “Covid-19” pandemic.

During the "Dubai Running Challenge", which was held under the auspices of Mai Dubai, Sheikh Zayed Road was transformed into a huge running track, where contestants of all ages and physical abilities participated in either running or walking on two tracks with a length of five and ten kilometers, and he was also keen to participate in the challenge owners People of concern and families who used prams to take their children during the race.

In a wonderful scene in the early morning hours, the challenge area was covered in blue as the participants, wearing the blue “Dubai Challenge Running” shirts, provided by the “Sun and Sand Sports” stores, gathered in front of the starting line near the Museum of the Future, and then proceeded to the finish line. Passing a number of Dubai's most important landmarks including the Emirates Towers and Burj Khalifa, all the way to the finish line on Al Mostakbal Street near the Dubai World Trade Center.

The first 5km track attracted families and amateurs, while the 10km track featured professional runners, along with some of the world's most famous middle-distance runners.

Ahmed Al Khaja, Executive Director of the Dubai Festivals and Retail Establishment, said: “The Dubai Running Challenge has become a highly anticipated annual event aimed at encouraging and motivating residents and visitors to Dubai to adopt a more active and healthy lifestyle, and various sectors cooperate in its success.

Today, we were pleased that 146 thousand people participated in the challenge, in a scene that embodies the great success achieved since the launch of the "Dubai Fitness Challenge", and the event also confirms the community's commitment to prioritizing physical and mental health.

All thanks and appreciation to all those who contributed to achieving this achievement, whether organizers, partners or participants, who had a role in making the “Dubai Running Challenge” an unforgettable event.

Saeed Hareb, Secretary-General of the Dubai Sports Council, said: “The Dubai Running Challenge is an exceptional event in every sense of the word, with huge participation from all over Dubai, which formed a wonderful competitive panel that proves to the world the commitment of our wonderful city to encourage its residents and visitors to adopt a healthier and happier lifestyle.

We are all honored at Dubai Sports Council to be a part of this historic event, and we thank everyone who participated and contributed to supporting Dubai’s ambitious goal of becoming the world’s most vibrant city.”