Criticism of Gleichengauz, music by Mishina and Gallyamov and controversies about the age of single women: what is being discussed in the world of figure skating

American experts criticized Daniil Gleichengauz for the performances of Anna Shcherbakova and Alena Kostornaya, and Tatyana Tarasova and Ilya Averbukh spoke out in favor of the Russian choreographer. Tamara Moskvina decided to correct the musical accompaniment of the free program of Anastasia Mishina and Alexander Gallyamov, which was not appreciated by some experts. And Elizaveta Tuktamysheva refused to be called a symbol of women's figure skating. 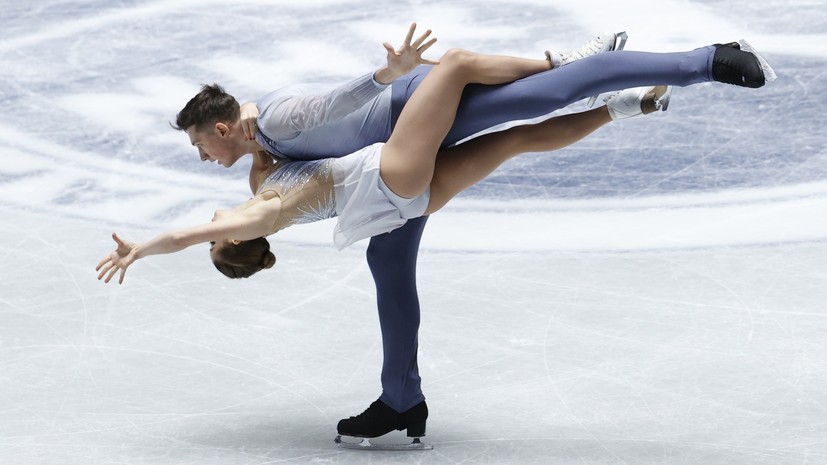 In the outgoing week, a verbal skirmish ensued among experts over the work of Daniil Gleichengauz, the choreographer of the Eteri Tutberidze team.

After the Grand Prix stage in Grenoble, American blogger, musician Jonathan Bayer criticized the performance of the winner, Anna Shcherbakova, stating that her choreography had absolutely nothing to do with music.

At the French stage, the Russian woman performed with an updated short program - instead of the music of Kirill Richter, she skates to the composition of Inon Zur.

“Her short program has very interesting music, but they completely ignore it,” Bayer said on The Skating Lesson podcast.

- When the music dies down, tension appears - Anna waves her hands.

And there are, on the contrary, dramatic moments in which she just skates and that's it.

The pace is changing, but Shcherbakova is not.

I don't know if Gleichengauz doesn't care, or he doesn't understand music. "

Honored coach of Russia Tatiana Tarasova, responding to criticism, stressed that this is just Bayer's "own opinion", and "others may have a different opinion."

“Who has the choreography?

Of those who are now, ”she asked the American in return.

“I don’t think good choreography is defined by complex transitions and jumbled movements.

Tarasova herself has always done magical emotional programs, her choreography has always followed the music.

- quotes the words of the musician "Sport-Express".

Ilya Averbukh, the choreographer-director of "Ice Age" and the author of many of his own shows, responded to the criticism.

In his opinion, one should not pay attention to the statements of non-professionals.

“Some criticism is permissible only from people who represent something of themselves, from reputable choreographers.

And that is very correct, with an understanding of the issue.

And this is not criticism, this is an opportunity to declare yourself loved through our athletes, ”the 2002 Olympic medalist emphasized.

After Grenoble, Gleichengauz suffered not only from Bayer, but also from the latter's compatriot, the famous journalist Jackie Wong - this time about Alena Kostornaya.

“Kostornaya surpasses most skaters in terms of technique and fluency;

the free program was not composed in the best way - it did not have the interpretation of the musical accompaniment, which, as we know, Alena is more than capable of, "he wrote on his Twitter account.

This program of the European Champion 2020 is also new, in Grenoble the audience saw it for the first time - Kostornaya is skating to the song of Billie Eilish instead of Vivaldi's “Seasons of the Year”.

Tatyana Tarasova, in turn, said that "watching this program is very difficult."

Upgrade for Mishina and Gallyamov

Criticism in the Olympic season goes not only to Gleichengauz, but also to the legendary Tamara Moskvina.

The free program of her couple, Anastasia Mishina and Alexander Gallyamov, aroused many questions from specialists even after the September test skates.

It seemed that the two melodies used in the production - "Snowstorm" and "Time Forward" by the Soviet composer Georgy Sviridov - absolutely did not go together.

“Nice performance, but honestly I didn’t see the program.

Two outstanding pieces of music, no doubt about it.

But there is no logical transition, ”Ilya Averbukh said then on the air of Channel One.

And so the composer Alexander Goldstein said that for the stage of the Grand Prix in Sochi, which will be held on November 26-28, a new arrangement was made to the musical accompaniment of the duet.

In the composition, the volume of two excerpts was leveled and the beginning was completely rewritten, as there were extraneous noises.

"Although the skaters just stand still at this time, it is better not to spoil the mood with an indistinct introduction," said Goldstein.

“The middle part was more difficult work: I assigned additional parts of the piano, harp and double bass for a clear rhythm, and also included several different choirs.”

The music of the short program was also adjusted, which the coaches wanted to strengthen, but at the same time "not to lose its playful character."

“We decided to color the music with modern effects.

This added a certain surprise and organic hooliganism to the composition.

They accentuate the elements and create a more complete fusion of movement and music, ”said the specialist.

The debate about the need to increase the age limit for performing in women's skating is still ongoing.

In many ways, these disputes were fueled by the recent injuries of two figure skaters from the Tutberidze group - Alexandra Trusova and Daria Usacheva.

Experts and fans spoke with renewed vigor that performing at a high level at the age of 15-16 negatively affects the health of athletes.

So, the Belgian figure skater Luna Hendrix said that girls over 18 years old should perform at the adult level.

“From my own perspective, I can say that this is a really very good age.

You have already gone through puberty, through the phase of growing up ... I think that at the age of 18 you can already call yourself a real woman.

Well, at least in terms of the body, "- quotes the words of the sportswoman" Match TV ".

The ex-captain of the Russian national rugby team Vasily Artemiev, who does not like that the rate in women's figure skating is made on difficult jumps, and not on the beauty of performance, is of a similar opinion.

The athlete recalled that the sport is called "figure skating, not figure jumping", and also said that children up to 14-15 years old should engage in various sports for their pleasure.

“I am not happy with early specialization in sports from the point of view of the physical and psychological health of children,” stressed Artemyev.

- It can give good results in the moment, but it is not good for the children.

<…> I would not give my daughter to figure skating.

I don’t want her to jump on the ice every day. ”

Olympic champion in ice dancing Natalya Bestemyanova has no doubts that the age limit will be changed in order to deprive Russia of its leading positions.

“How can you compete with us then?

- Only in our country so.

Yes, in America, Korea, Japan, girls began to appear who try quads and triple axels, but not in such numbers and not so early.

It will be exactly a tactical competition - to raise the age ”.

At the same time, Elizaveta Tuktamysheva is increasingly called the personification of women's figure skating.

The ex-world champion is 24 years old, and last season, having returned to the Russian national team, she became the silver medalist of the world championship.

Now she is fighting for getting into the Grand Prix finals and retains good chances to go to the Olympics.

“It's very cool when you have a long, eventful career.

I am very worried about her.

She's been skating for so many years and never gives up.

However, Tuktik herself, as fans affectionately call her, does not consider herself either a heroine or a symbol.

“I will not say that I have become some kind of symbol of women's skating, this is a very loud statement.

I always tried to override myself and go across the established rules.

For me, it was always interesting if there are young ones, and there are fewer and fewer older figure skaters.

This means that I have to skate, I will show that it is possible, I feel the strength in myself, ”said the skater.

Even the popular comedian Alexander Gudkov joined the discussion about the femininity of skating and the age qualification.

Women of the Year 2021 ", he showed a parody of an experienced skater who is fighting" for the rights of middle-aged women in her sport "and is about to go to the Beijing Olympics.

best video of the “Glamor.

“And these fifteen-year-olds, who are good for my daughters, let them choke on the wool of their plush toys.

Because the future belongs to strong grown women.

Lutz to everyone! ”- says the heroine of Gudkova.

Sports 2021-11-26T15:42:04.703Z
Criticism of Gleichengauz, music by Mishina and Gallyamov and controversies about the age of single women: what is being discussed in the world of figure skating
Sports 2021-09-09T11:23:23.031Z
"I consulted with the Sinologists of our Foreign Ministry": Moskvina on new programs, the importance of the Grand Prix and rivalry with Tutberidze
Sports 2022-01-14T08:22:33.744Z
Boikova and Kozlovsky did not clap Tarasova and Morozov at the awards ceremony
ADS
Sports 2021-08-02T05:58:09.244Z
Medvedeva's personal life, Boykova's childhood dream and Bobrova's fencing debut: what is being discussed in the world of figure skating
Sports 2021-11-13T11:01:47.310Z
Premiere show with a bang: how Russian figure skaters won the competition of pairs and dancers at the Grand Prix stage in Japan
Sports 2022-01-12T20:33:58.170Z
Mishina and Gallyamov set world record in short program among sports couples
Sports 2021-12-26T18:38:52.407Z
Salkhov Medvedeva, Zagitova's number and Tuktamysheva's striptease: what surprised the skaters at demonstration performances in the Czech Republic
Sports 2021-12-25T17:44:49.575Z
The triumph of the St. Petersburg school: Mishina and Gallyamov were ahead of Boykova and Kozlovsky and won the Chechen Republic in pair skating
Sports 2021-11-21T06:27:43.047Z
According to the Brazilian system: what is remarkable about the victory of Boykova and Kozlovsky at the Grand Prix stage in France