Today, Frida Westman makes her World Cup debut in ski jumping. But double knee injuries could have put an end to his career. - Then I felt a little "should I continue" ?, she says to SVT Sport. 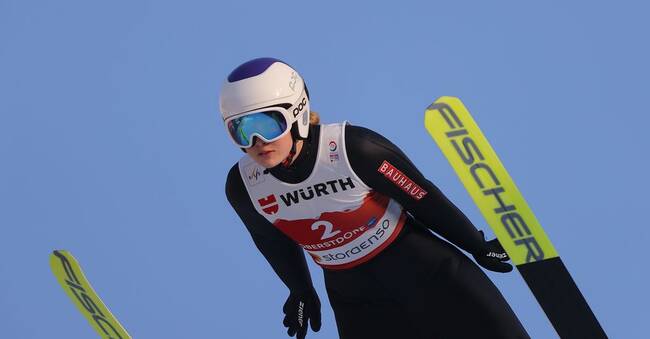 Frida Westman from Örnsköldsvik always accompanied her father Magnus to the slopes when she was little and when she came home one day after watching a competition, she decided - she would also jump.

She was then six years old.

Today, as a 20-year-old, she makes her debut in the World Cup.

But the journey there has not been easy.

It all started in 2017 during the premiere on snow.

After the first jump, she got a sore knee and it turned out that both the meniscus and the cruciate ligament were damaged.

After surgery, she was back after a few months.

Then came the next blow, on the other knee.

- It was much tougher than the first time.

It was like emptiness and I did not understand what I had done wrong.

I had struggled to get back and so I get this.

Then I felt a little "should I continue" ?, she says to SVT Sport.

- I was so young then, almost 18, and I felt that I had so much more to give so then I could not give up.

New surgery was waiting and this time it took almost a year to come back.

During the rehabilitation in 2019, Westman moved to Norway to make a larger investment in ski jumping.

Was missing the qualifier

The 20-year-old made his World Cup debut earlier this year and placed 35th.

In September, she then took the best position for a Swedish ski jumper of 14 years, when she finished fifth during the Continental Cup in Oslo.

She followed this up by missing the podium last week with only 0.6 points in the season's first FIS cup competition.

Today she enters the World Cup in Russian Nizhny Tagil.

She moved on from yesterday's qualifier in 31st place, despite an allergic reaction that caused her to miss the training jump before the qualifier.

- I am allergic to peanuts and I felt yesterday at lunch that I ate something that I should not eat more of.

After the warm-up, my heart rate got higher and then I felt that my face started to swell up and my eyes became completely red, she says.

But thanks to ambulance staff who picked up her medicine from the hotel room, she was still able to complete the qualifier.

Today she is more alert and the goal is to end up among the 30 who advance to the second round.

- I think it will be much better today.

I know I have the capacity to make it to the second round and take points, she says.

Although today's goal is to reach the second round, Frida Westman has a clear goal with her career in general.

- Ever since I started betting, I have said I will take Olympic gold.

I want to be the best in the world in women's ski jumping.

If I succeed, I hope to make it happen in Sweden, that it will be bigger again so we do not lose the sport completely, she concludes.