Mansour bin Mohammed: The UAE will always remain the homeland of creativity in all areas of life

His Highness Sheikh Mansour bin Mohammed bin Rashid Al Maktoum, Chairman of the Dubai Sports Council, affirmed that “the UAE will always remain the homeland of creativity in all areas of life, and that it will continue its leading role in nurturing and honoring creators and spreading and promoting a culture of creativity in various sectors, including the irrigation sector. 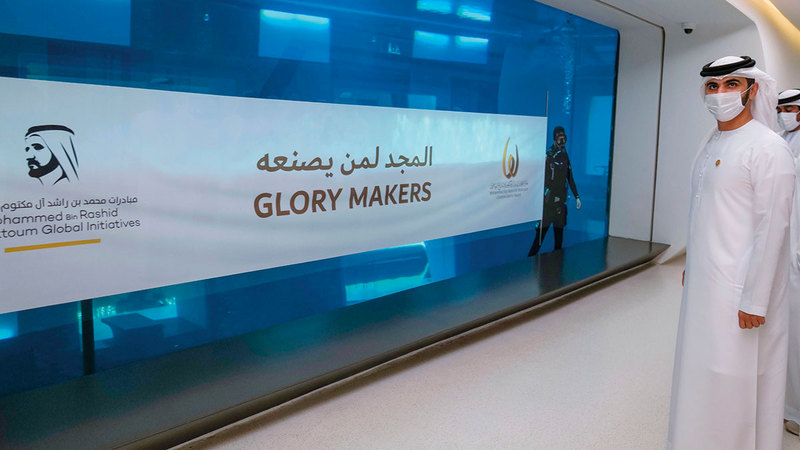 Mansour bin Mohammed: The UAE will always remain the homeland of creativity in all areas of life

His Highness Sheikh Mansour bin Mohammed bin Rashid Al Maktoum, Chairman of the Dubai Sports Council, affirmed that "the UAE will always remain the homeland of creativity in all areas of life, and that it will continue its leading role in nurturing and honoring creators and spreading and promoting a culture of creativity in various sectors, including the sports sector." .

During the ceremony announcing the winners of the 11th session of the Mohammed bin Rashid Al Maktoum Award for Sports Creativity, one of Mohammed bin Rashid Al Maktoum's global initiatives, His Highness said: "Our wise leadership supports excellence and creativity in all fields, and emphasizes that sponsoring, supporting and honoring creators and spreading a culture of creativity, excellence and quality, It is a basic approach to building the future that the people of the UAE, as well as the Arab brothers and the whole world deserve, and the wise leadership launches initiatives every year to support excellence and creativity and care for distinguished and creative people in all fields, which made the UAE take the lead in this field.”

His Highness added: “In the past 50 years of the state’s life, we have made many achievements that made the state a global model for the wisdom of leadership, the efficiency of the people, and the ambition that does not know the impossible and surpasses all challenges. The next 50 years will witness more and greater achievements in all fields, and the state will be a supportive homeland for every creator.” .

Spreading a culture of creativity

Mattar Al Tayer said: "The prestigious international position that the award has reached, came thanks to the support and care of the wise leadership," noting that it made it the dream of all workers in various fields of sports work.

He added: "Since 2009, the award has continued to appreciate and honor creators, and to stimulate the sports sector for development, by spreading a culture of creativity in sports work, and honoring creators in the UAE, the Arab world and the world."

Despite the challenges faced by sports worldwide, and the decline in participation numbers in all tournaments and events, the 11th session achieved a growth in the number of participants, which reached 409 candidates, an increase of 14% over the previous session, in addition to the increase in the number of honorees to 28 winners, which confirms the great status of the award and the keenness of everyone to run and compete for the honor of winning it.”

The list of honorees included 28 innovators in all fields of sports work, and the list of winners in the categories of the current session was topped by the Pakistani Prime Minister, Imran Khan, winner of the World Sports Personality Award, in recognition of his efforts in placing Pakistan among the strongest teams in the world in cricket, and his leadership of his country to win the title The Cricket World Cup in 1992, as well as through his stardom, he continued to be a prominent national sporting and political symbol and Prime Minister.

The Arab Sports Personality Award was awarded to Sheikh Joaan bin Hamad Al Thani, President of the Qatar Olympic Committee, as he has succeeded since his presidency of the Qatar Olympic Committee in 2015 in achieving many global sporting achievements. Ali Mabkhout, the UAE national team’s historical top scorer with 78 goals, and the local league’s historical scorer with 175 goals, Ali Mabkhout, won the local sports award, and Anas Al Otaiba, the local administrator award, after winning the presidency of the Asian Federation and the position of Vice President of the International Boxing Federation, as well as the local coach. I went to Abdulaziz Al-Anbari, for his achievements when he was a former coach of Sharjah, (most notably achieving the Arab Gulf League title after an absence in the 2019 season), as well as Abdul Hamid Ibrahim, being the dean of basketball coaches in the Emirates, with 58 titles so far in his career. And he was crowned in the local team award, the Emirates team for ability and endurance, for winning the gold in the World Youth and Junior Championships in Italy.In the Arab world, the Algerian national team won the Arab team award,

For winning the 2019 African Nations Cup in Egypt, while the Arab champions in the Tokyo Olympics shared the “Arab Sportsman” award, along with many other winners.

The winners of the 11th round

• The local team: the UAE national team for ability and endurance.

• The local institution: Zayed Higher Organization for People of Determination.

• The Arab team: the Algerian team.

• The Arab Foundation: Al-Ahly Club of Egypt for Physical Sports.

• Athlete who achieved a high level of achievement: the Syrian Maan Abdel Moeen.

The coin and the stamp bear the image of His Highness Sheikh Mohammed bin Rashid Al Maktoum, Vice President and Prime Minister of the UAE and Ruler of Dubai, while the colorful state emblem adorns the back of the coin with its monetary value, and the stamp is adorned with the award logo.