Zenit breakaway, Vitoria's fate and Agalarov's goals: the five main intrigues of the RPL before the winter break

There are only four rounds left before leaving for the winter break in the RPL. Will Zenit be able to increase the lead over their pursuers or will they lose points during their visits to Moscow? For the first time in history, will Dynamo be ahead of their fellow countrymen Lokomotiv and CSKA? Will Sochi and Wings of the Soviets use the convenient calendar and finish in the top three? Will Spartak dismiss head coach Rui Vitoria? And will Ufa forward Hamid Agalarov score 15 goals? About the main intrigues of the national championship - in the material RT. 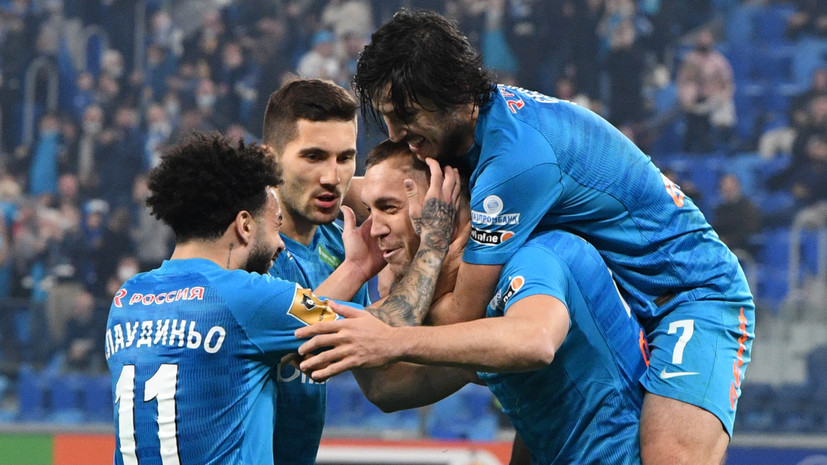 Will Zenit increase the lead over competitors

Major victories over Spartak and Dynamo have convinced many fans and experts that Zenit will once again become the champion of the country, and most likely long before the end of the tournament.

However, a draw in Yekaterinburg with Ural, who was the last in the table, hinted that Sergei Semak's wards were by no means so ideal.

This is confirmed by the loss of points in Ufa, as well as the sensational defeats from Sochi and Arsenal earlier.

Thus, it is far from the fact that Zenit will increase the three-point lead over their pursuers.

On the contrary, it may melt by mid-December.

Moreover, the blue-white-blue in this segment will face difficult away confrontations with CSKA and Dynamo, in which no one can guarantee them points.

For example, last year the team from the banks of the Neva lost to the wards of Sandro Schwartz at the VTB-Arena with a minimum score.

And in home games with Rostov and Nizhny Novgorod, surprises are possible.

After the departure of Yuri Semin, the southerners scored a good move, and the RPL newcomer earned the title of "thunderstorm of authorities" for victories over Sochi, Spartak, Dynamo and Rubin.

At the same time, Alexander Kerzhakov will be especially pleased to surprise the team, which at one time gave him a start in life.

This is the case when the players are obliged to fight for the mentor with special diligence.

In addition, we must not forget about the remaining matches of the Champions League group stage.

Petersburgers in the main European Cup are still waiting for a meeting with Malmö on the road and with Chelsea at home, which will take away a lot of forces.

All in all, the reigning champion will have six meetings in 23 days.

The current RPL season turns out to be rich in coaching resignations.

The mentors have already been replaced by five teams, and “Rostov” has formally done it three times.

The next in line may be Spartak.

Despite rare glimpses, Rui Vitoria does little in Russia.

The reds and whites play extremely unstable and alternate weak-willed and faded games with characteristic and bright ones.

The last two were rather successful for Muscovites.

They took the points away from Leicester and escaped with ten men from defeat in the derby with Lokomotiv.

However, there is still no feeling that the team is about to get on the right track.

In theory, any defeat could lead to resignation, overfilling the cup of Leonid Fedun's patience.

Nevertheless, it is not worth waiting for the Portuguese to be fired until the end of the year.

It is banal for the management of the red and white to part with the helmsman and urgently look for a replacement, so as not to introduce the team into a state of additional stress.

It is much more logical to do this after completing the segment and leaving for the winter break.

In addition, in the remaining time, the team is quite capable of rectifying the situation thanks to victories over the outsiders Ufa and Akhmat in the RPL and to break into the playoffs of European cups, taking at least third place in the group.

Then the question of Vitoria's resignation can be temporarily removed from the agenda.

The bright young Dynamo is in sharp contrast to the unstable Spartak.

Sandro Schwartz's wards are fighting for medals and for the first time since the national championship switched to the “autumn-spring” system, they can go on a winter break, ahead of the rest of the capital's teams.

CSKA cannot boast of stability and traded a successful streak for two defeats in a row, while Lokomotiv suffers from two epidemics - injuries and draws.

And in order for the latter to be replaced by victories, the number of the former must significantly decrease.

The young Russian footballers who defend the colors of the club are especially good.

Arsen Zakharyan leads the race of the best assistants of the tournament with five assists.

Konstantin Tyukavin scored six goals on all fronts in a month and a half.

And Daniil Fomin now plays not only in the team, but also in the national team.

Until the end of the year, the blue and white are waiting for a meeting with Rubin and Zenit, for which the mood will definitely be outrageous.

But no less important will be the confrontation with outsiders - Arsenal and Ufa.

And they look even more dangerous for the Moscow team, given the loss of points with Akhmat, Nizhny Novgorod and Wings of the Soviets.

Will Wings and Sochi end the year in the top three

This season is not much different from the previous one in terms of the stability of the giants.

They constantly lose points in matches with inferior opponents in their class.

In these conditions, more modest teams get a chance to break into European cups.

In the last draw, Sochi and Rubin fans were surprised.

In the current one Kazan is experiencing difficulties, but the southerners continue to delight and after 14 rounds are in second place.

The nearest segment will in many respects become decisive for Vladimir Fedotov's charges, because apart from Ural, they will face off against Rubin, Krasnodar and Spartak.

And it is not excluded that in these meetings Sochi will gain maximum points.

First, they don't have excessive reverence for the top clubs.

Secondly, all these meetings will be held at the Fisht stadium, where this season they have won five victories and one defeat.

Therefore, it is possible that Sochi will not only retain its place in the top three, but will also catch up with Zenit.

It will be more difficult for Krylia Sovetov to climb so high, after all, they are four points behind the third place.

However, Samara under the leadership of Igor Osinkin gained an excellent move, and the attacking four Anton Zinkovsky - Ivan Sergeev - Vladislav Sarveli - Roman Yezhov conquered the elite division in an amicable way.

In November-December, the team that returned to the RPL will also hold three meetings at home, which will be an additional advantage.

And not to say that they will have the most difficult rivals - Ural, Nizhny, CSKA and Rubin.

The Volzhans are capable of completing the year in the European Cup zone, or even aiming for more.

The Ufa forward has become one of the main discoveries of the current Premier League draw.

Agalarov, who had not been shining before, scored 11 times in the first 14 rounds, thanks to which he led the tournament scorers race by a large margin.

In fact, he single-handedly drags the team from Bashkortostan by the hair, because if you don't take Hamid's goals into account, the rest of the team scored only three times.

In November-December, the outsider will have an extremely difficult calendar.

The team of Alexei Stukalov will host Spartak and face off against Rostov, Dynamo and Lokomotiv on the road.

In meetings with opponents of this level, the attacker will not have many chances to excel.

However, it is just famous for its implementation.

In addition, a football player will have additional motivation - to “show the product with his face” in front of potential buyers.

It's no secret that the rate of fire of a young native of Dagestan attracted the interest of the country's leading teams.

A successful game with them can speed up the transfer, which will both bring important money to Ufa and raise the athlete's career to a qualitatively new level.