Sarah Sjöström continues to deliver during the ISL playoffs in Eindhoven. The Swedish swimming star took home both the 50 meter butterfly and the 50 meter freestyle competition. - This was fun, she says in the victory interview. 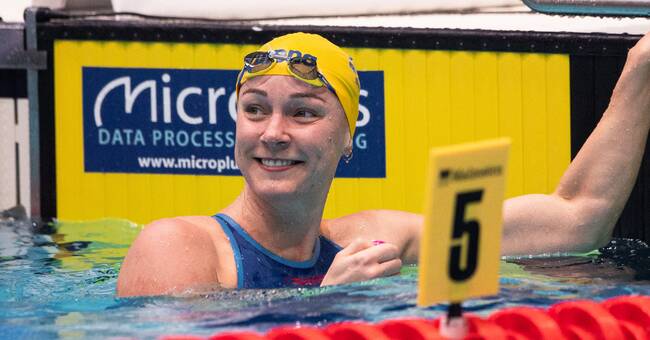 Sarah Sjöström impressed on Thursday when she won the 50 meters freestyle in 23.08 - her second fastest time in her career and only 15 hundredths over the world record of the Dutch Ranomi Kromowidjojo.

When the double distance was completed on Friday, she had to settle for a second place.

British Anna Hopkin had the grip on second place with the last 25 meters left.

Then Sjöström put in the jerk and passed her.

Hopkin crashed all the way to fifth place before it was over and was also beaten by Swedish Michelle Coleman who finished fourth in 52.16.

Sjöström's teammate in Energy Standard Siobhan Haughey, Hong Kong, kept the lead from start to finish and won at 51.11.

The success continued in the 50 meter butterfly where Sjöström was the strongest and won at 24.75 - 25 hundredths ahead of Australian Holly Barratt.

Shortly afterwards, Sjöström had to reload for a 50 meter freestyle competition and showed class.

There, the swimmers compete in elimination races against each other at a fast pace, first eight swimmers, then four and in the final two.

The 28-year-old won both the first and second rounds before she also cleaned up Katarzyna Wasick in the final.

It is not easy, but I am used to running such frequent races, says Sjöström in the victory interview according to DN.

Energy Standard thus took a superior victory in the playoffs where Sjöström became today's most valuable swimmer after collecting the most points.