Behind the attack on the female football player in Paris, there is a bit of "dog blood" story

In the arena, we have seen players fighting fiercely to stand on the podium, and we have also seen them embrace and celebrate after winning. There are tears of joy and bitterness... But even if you have seen a lot of big scenes, the next story may still exceed all cognition.   A few days ago, there was an "extraordinary anecdote" in international football that surprised the editor. Image sour 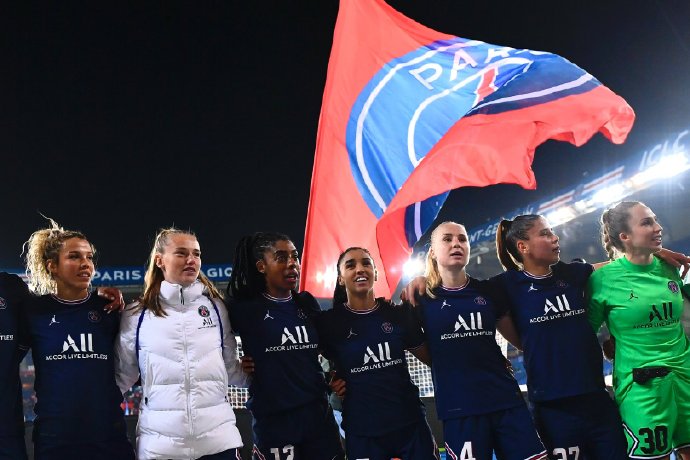 In the arena, we have seen players fighting fiercely to stand on the podium, and we have also seen them embrace and celebrate after winning.

There are tears of joy and bitterness...

But even if you have seen a lot of big scenes, the next story may still exceed all cognition.

A few days ago, there was an "extraordinary anecdote" in international football that surprised the editor.

Hire someone to beat a teammate

According to a report from the French "Team Daily" on November 10, Paris women's midfielder Diallo (the character in the picture below, wearing a No. 20 jersey), in

order to get more playing time, is suspected of buying a murderous assault on teammate Hamraui.

After the official confirmation by the Paris Club, the former was detained by the police.

Since then, many overseas media have reported on the matter, saying that Aminata Diallo was detained by investigators, accusing her of participating in a premeditated attack on a teammate who was brandished with a club. Masked man hit the leg.

It is reported that after a club dinner, Hamraui was attacked by two masked men on his way home.

Because of this attack, Hamraui's legs and hands were treated with stitches, and she was therefore absent from the Paris Women's Champions League match against Real Madrid.

Based on the news

all parties at the time,

the violence occurred from the internal competition of the Paris women's football.

Later, the Paris Saint-Germain Club also expressed its attitude towards the incident,

"Paris Saint-Germain condemned the violence committed in the strongest terms."

The follow-up investigation of the case is also ongoing.

Because of the competition for more playing time in the game, he hired fierce to beat his teammates.

This kind of news is not only in the world football, but also very few in the entire sports circle.

Image source: A screenshot from the social media of the Paris Saint-Germain Club.

When this news spread on domestic social media platforms, it was a different story.

Fortunately, Wang Shuang is back.

Is the emotional dispute the real cause?

However, just as the parties were waiting for the case to be heard further, a sudden reversal directly made the editor who had been shocked before could not find the glasses at all.

The Paris Saint-Germain Club issued another official statement on social media a few days ago, stating that the Paris women’s football player Diallo, who was accused of assaulting his teammate, has been released by the police.

As soon as this news came out, netizens who followed the incident were a little confused.

However, as a number of overseas media followed up and reported,

According to reports, the investigation of the case has undergone dramatic changes.

The person who provided this clue to the police was Diallo.

According to the "Marca" report, Diallo said that Abidal had a close relationship with Hamraui who was beaten up in the recent and past periods in Barcelona.

Speaking of Abidal, fans are no strangers.

Born in 1979, he played for Monaco, Lille, Lyon, Barcelona, ​​Olympiacos and other teams, and followed Barcelona to win the Champions League twice.

In addition, he was also selected for the French national team and played 67 times on behalf of the "Gaul Roosters" in his career.

During 2018-2020, after retiring, Abidal served as the technical director of the FC Barcelona. Coincidentally, Hamraui who was attacked this time was a player of the Barcelona women's football team.

After in-depth investigation, it was found that the mobile phone card used by Hamraj was registered under the name of Abidal, and according to reports, on the second day after the incident, Hamray also had a phone call with Abidal.

After that, the French media Le Monde also reported that the

attack on the Parisian female football player Hamraui may be related to Abidal, and the French celebrity will be questioned by the prosecutor.

The title of the article means: Abidal’s wife is currently suspected in Hamraui’s case

In addition, according to various media outlets,

Abidal's wife Hayet is currently a suspect in the attack and is under investigation.

"The prosecutor in this case subsequently confirmed that Abidal will be questioned soon, and his wife Hayet Abidal may also face interrogation."

It is reported that Abidal married his wife Hayet in 2003 and currently has five children.

Investigators suspect that the murderer may have planned the attack out of "retaliation."

From the initial pitch dispute between teammates over playing time, to the later private disputes caused by emotional problems, such a reversal "dog blood drama" is really unimaginable.

Many netizens who eat melon throughout the whole process joked that the development of such a plot seems to be watching a reasoning drama.

I don’t know how you feel after reading this story?