The strongest defense teams are closer to the title... Al Ain and Al Wahda are "top"

The lead in the ADNOC Professional League witnessed several fluctuations, which proved that the competition in the current season is different from previous seasons, especially that the teams that lost 10 and 11 points in nine rounds can still fight for the championship, as the "title holder" received the third loss this season. 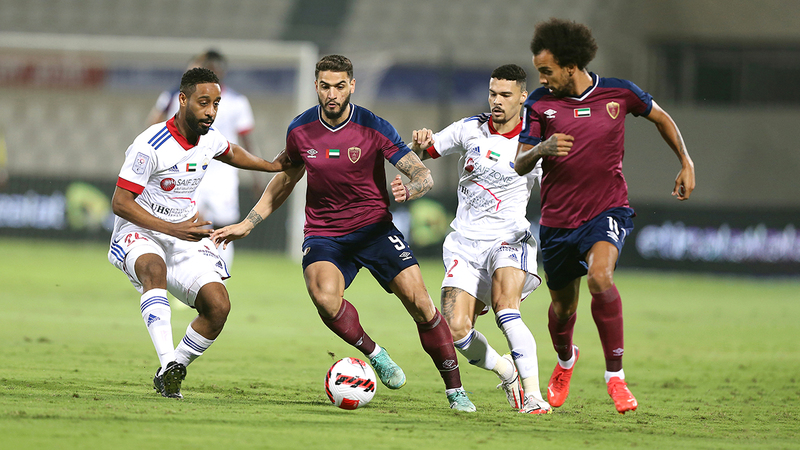 Khaled Obaid: The dismissal of Al-Anbari caused the deterioration of Sharjah's results in the league

The strongest defense teams are closer to the title... Al Ain and Al Wahda are "top"

Al Wahda surprised Sharjah in its own land and came out victorious 3-0.

The lead in the ADNOC Professional League witnessed several fluctuations, which proved that the competition in the current season is different from previous seasons, especially that the teams that lost 10 and 11 points in nine rounds can still fight for the championship, as the "title holder" received the third loss this season against Ajman, but he is still one of the most prominent candidates for the title, and the round also reflected a football logic that the strongest defense teams are the ones closest to the top.

Al Ain maintained its lead in the league with a difficult victory over Al Dhafra with a goal free of charge, to be the most convincing team in terms of results so far. , where he conceded only five times without any loss, which gave him the rush to the top.

Al-Jazira’s loss came unexpectedly against Ajman, and Al-Ahly’s youth drew against the Kalba Union, which took a step back, and there were three teams with the same balance, namely: Al-Nasr, Al-Jazira, Al-Ahly Youth, which shows how difficult the competition is this season, due to the convergence of the level between the teams. .

As for the victory, it is still confusing to the audience and critics, and he does not know why the results fluctuate, so he retreats sometimes and then rises, which happened by obtaining the “Derby” points against his neighbor Al-Wasl with a 2-1 victory, while the latter continued to suffer from weakness in the level of foreign players, which hurt a lot. The team and its journey in the championship, unlike the “black horse” this season, is the Khorfakkan team, which is in sixth place on the table, and it is one of the most recent emerging teams in the top eight teams in the championship so far digitally.

Khorfakkan had surpassed Sharjah, Al Wasl, Baniyas, and Ittihad Kalba, and played strong matches, thanks to the planning and vision of the company’s chairman, the 90th team player, Khalil Ghanem, who collected only four points in the first round last season, but corrected and brought in distinguished players. They have to get to where it is now.

"Emirates Today" monitored a question about the public's opinion of the Sharjah team, and the bad results that happen to it, with a question on the social networking site "Twitter": Who is responsible for the collapse of the Sharjah team in the league championship after the big defeat against Al-Wahda in the ninth round of the professional league?

During the voting in which 316 people participated, 34.5% of the participants chose to dismiss Al-Anbari, 7% chose the foreign players, 31.6% were administrative errors, and 26.8% were reckless players.

And the technical analyst, Khaled Obaid, confirmed that “the board of directors of Sharjah Club bears the responsibility for the team’s failure in the recent period, due to the wrong timing for changing coach Abdulaziz Al-Anbari, who, in my opinion, was not responsible for the bad results suffered by the team, due to the different tools that were under His hand, from foreign players and distinguished citizens.”

Khaled Obaid told "Emirates Today": "A strange round of our league witnessed unexpected fluctuations in the ranking table, as Al-Wahda became the runner-up, and it is the strongest defensively, despite losing 10 points from five draws, and victory returned to the competition, and an unexpected loss for the holder. The title is the Al-Jazira team, its third this season, and the Al-Ahly youth team is equal, all of which make the table many fluctuations.”

He added: "Abdulaziz Al-Anbari is not responsible for the deterioration of Sharjah's results, and his dismissal was wrong. The tools with which the team won the league title differed, and the board of directors sold players, who benefited financially from them at the expense of the technical side of the team, which lost a lot because of these interventions that harmed the team, She was the reason for what is happening to the team now.”

To view the top scorers and the standings of the teams for the 9th round,