The three-month countdown to the Beijing Winter Olympics: a beautiful vision, we witness together 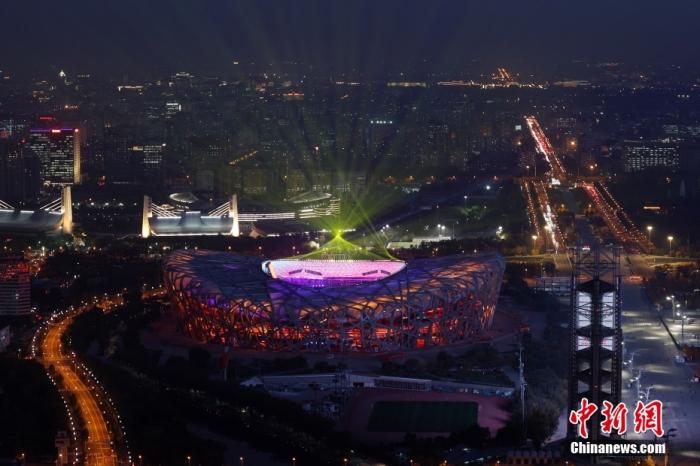 The picture shows the lighting of the National Stadium.

Chinanews client, Beijing, November 4 (Reporter Yue Chuan) The 24th Winter Olympic Games will kick off in Beijing on February 4, 2022, and there are still three months left.

With the good wish of "together with the future", the world is looking forward to an Olympic Games that will leave beautiful memories.

In the past half a month, with the Olympic fire coming to the homeland after 13 loads, and the medal "Concentric" finally revealed its true face at the 100-day countdown, the atmosphere of the Beijing Winter Olympics has rapidly heated up, becoming a hot topic in the streets and even inside and outside the world. topic.

The countdown is three months, this time node once again guides: the Beijing Winter Olympics is about to set sail, and the world's eyes are once again focused on China and Beijing.

The pace of the Beijing Winter Olympics is approaching, and all preparations are coming to an end.

"Crystal Shoes" Shougang Ski Jump, "Ice Ribbon" National Speed ​​Skating Stadium, "Snow Ruyi" National Ski Jumping Center... As each plan moves from blueprint to reality, the host's promises to the world are fulfilled one by one.

Up to now, the "Bird's Nest" renovation project of the National Stadium, which is the venue for the opening and closing ceremonies of the Beijing Winter Olympics and Paralympics, has been successfully completed. All 12 competition venues have been completed, and they have passed the certification of the International Winter Individual Sports Organization. condition.

The medal for the Beijing 2022 Winter Olympics is composed of a circle and a circle.

The medal consists of multiple rings and is named "Concentric".

Not only the venues and infrastructure meet the requirements for running the game, but the venue-based operation mode during the game is also fully implemented.

These have been fully reflected in the "Meet in Beijing" series of winter sports events that have been launched in the three major competition areas of Beijing, Yanqing and Zhangjiakou since last month.

"Meet in Beijing" includes 10 international events, 3 international training weeks and 2 domestic testing activities, which will last until the end of the year.

Several test competitions that have ended have been widely praised by Chinese and foreign athletes.

He said that the international test competition is underway, the organization of the event is very good, and the participating athletes and the International Individual Sports Federation have excellent feedback from the competition venues.

On October 26, Beijing Shougang Park, the Olympic Five Rings logo has been hoisted.

The smooth development of the preparations for the Beijing Winter Olympics has brought more confidence to the world in fighting the epidemic.

However, the current global epidemic continues to spread, which also brings many challenges to the preparation work.

How to guide relevant parties to abide by these regulations is an important issue before the International Olympic Committee and the Beijing Winter Olympics Organizing Committee.

However, as Samaranch said, the two sides will work together to overcome various difficulties to ensure the success of this Olympic Games.

The Beijing Winter Olympics is "at your fingertips", and the Chinese sports delegation is sprinting and preparing for the goal of achieving all events and achieving the best results in history.

Li Yingchuan, deputy director of the State General Administration of Sports, recently introduced that a total of 480 ice and snow athletes in 29 national ice and snow training teams are accelerating towards the ultimate goal of the Beijing Winter Olympics. The athletes will strive to show their best on the field.

Affected by the epidemic, most international events have been postponed or cancelled in the past two years, which has impacted the normal preparations of the Chinese Army.

In the absence of training in large-scale competitions, various national teams have adopted a series of measures such as strengthening physical training and organizing intra-team competitions to create competition opportunities for athletes and timely test the results of Olympic preparations and training.

With the joint efforts of all parties and the assistance of cutting-edge technology, the adverse impact of the epidemic on preparations for the Winter Olympics has been greatly reduced.

Take the snowboard U-shaped field, snowboard big jumping platform and slope obstacle skills training team as examples. The players of these two national teams are currently spreading out in Austria and Switzerland to prepare for the battle.

Not only Liu Jiayu, Cai Xuetong, Gu Ailing and other famous players are in good condition, but many teenagers have repeatedly created surprises.

Just last week, 17-year-old Su Yiming successfully completed the world's first internal turn in 1980, that is, an inward turn for five and a half weeks to grab the board; Yang Wenlong completed a super-difficult movement, an internal turn somersault in 1980 (four somersault plus one and a half turns) , Became the first snowboarder in the world to complete the action completely...

Achieving good results in the Beijing Winter Olympics is the common wish of the national team and even of all Chinese ice and snowmen. They are doing their best in this direction.

Li Yan, who is regarded as a meritorious figure in China's ice and snow sports, is also one of them. The 55-year-old was "delivered in danger" and recently took over the coach of the national speed skating training team.

This is a team with high hopes, Ning Zhongyan, Gao Tingyu and others possess considerable strength.

As the leader of the Chinese short track speed skating team, Li Yan brought out Olympic champions such as Wang Meng, Zhou Yang and Wu Dajing.

Behind this appointment, it demonstrated the determination of the Chinese Army to hit the best record in history.

"Half-ninety people who travel a hundred miles", the closer you get to the end, the more difficult it is.

Seize the final window and prepare for the sprint around "all projects participating" and "participating to be brilliant". This is the goal of all national teams.

After four years of waiting and dedication, I hope that every diligence and sweat will be rewarded at the Beijing Winter Olympics.