Rögle continues to steam on in the SHL. Tonight they took a clear victory with 6-2 at home against the reigning champion Växjö. - We grind down the opponent, says Leon Bristedt in C More. 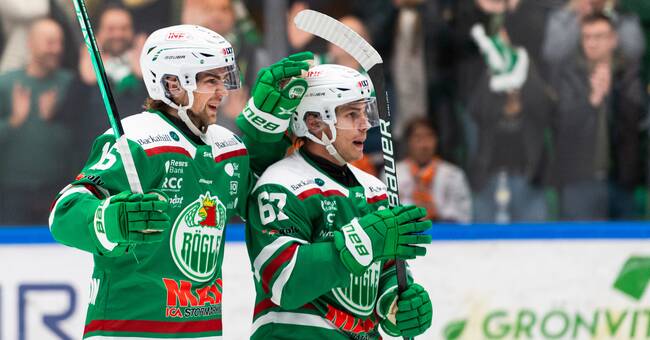 Strong table three Rögle, with nine victories in the last ten matches, hosted Växjö and invited the more than 5,000 home crowd to a real goal party.

Lucas Ekeståhl-Jonsson and Leon Bristedt were behind most things with three assists and one goal was in the big win.

After the match, Bristedt praised the audience.

- We get a lot of energy in the back of the audience, we have a lot to thank the audience for.

I think that is one of the keys to us being so difficult to beat at home, says Bristedt in C More after the match.

Rögle took the lead in the middle of the first period after a goal by Tony Sund who was assisted by Ekeståhl-Jonsson but that joy was short-lived.

Just over a minute later, Växjö equalized when Martin Lundberg got hold of the puck right in front of goal and was able to work in 1-1.

With just under five minutes left of the first period, Rögle took the lead again.

Leon Bristedt won the puck behind goal and fought his way up the field a few meters where he very skillfully found Adam Tambellini in front of goal that could put there 2-1.

But Rögle's goal celebration did not end there.

After assisting Brady Ferguson's 4-1 goal, Lucas Ekeståhl-Jonsson thought it was time to write himself into the goal record.

Leon Bristedt sent the puck to Ekeståhl-Jonsson who with a quick shot thundered in 6-2, which was the end result.

Rögle thus took his fifth straight victory at the same time as Växjö went on the second straight loss.