Out of competition: Valieva, Tuktamysheva and Kostornaya took the top three after the short program at Skate Canada

Russian figure skaters took the first three places in the short program at the Grand Prix stage in Canada. The leadership was taken by Kamila Valieva, who performed the triple axel for the first time at the official start and showed the second result in history. The second was Elizaveta Tuktamysheva, who also flawlessly performed all her jumps. Behind them was Alena Kostornaya, who allowed one under-rotation in the new program. 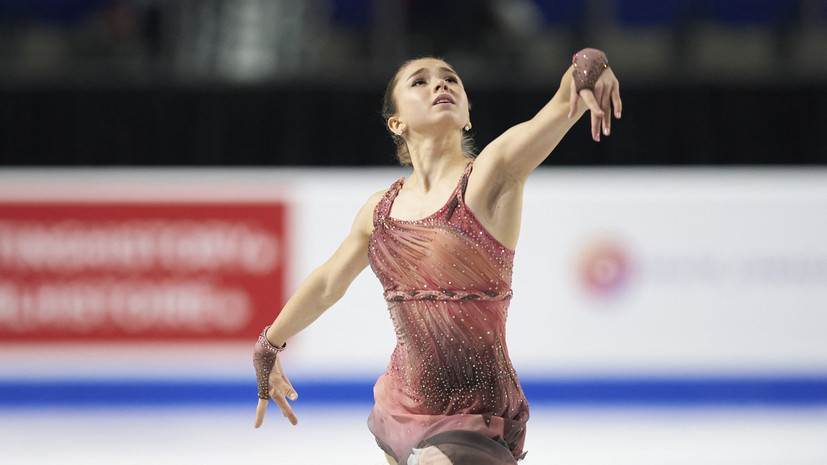 The recent Finlandia Trophy tournament remained in the memory of the fans as a competition where three “trixelists” met at once - Kamila Valieva, Elizaveta Tuktamysheva and Alena Kostornaya.

Although the confident execution of the triple axel is less and less surprising, so many girls who own this jump do not usually gather in the same arena.

The second stage of the Skate Canada Grand Prix series in Vancouver turned out to be even more ambitious in this sense. In addition to all three Russians who safely reached Canada, the American Alice Liu and the Japanese Mana Kawabe entered the triple axel in the short program. At the same time, the compatriot of the last Wakaba Higuchi left the jump for free skating. But if Rika Kihira hadn’t starred because of the injury, it would have turned out to be a completely unique picture - more than half of the participants would have turned out to be “trixelists”.

But for a successful performance, declaring an element is not enough, you also need to fulfill it. Foreign athletes have problems with this. Kawabe did not master all three and a half turns and also fell. The fall ended for her and the triple lutz. A surprise could have been presented by the Korean woman Lee Hae In, who did a triple axel on the morning rolling, but in the short program she chose not to risk it.

The first of the favorites was Valieva. In Finland, she never managed to cleanly make a triple axel, despite the fact that she confidently copes with quadruple jumps. That this time everything will work out, there were also doubts. Valieva, like all Russian women, had to miss official training due to a delay in visas, and on the day of the competition, a new nuisance occurred - the bus with the members of the strongest group was late due to traffic jams. The 15-year-old skater had a chance to practice the jump only during the warm-up right before the performance, and the attempt was unsuccessful.

But as soon as the music began to sound, Valieva got together and did what was expected of her for so long. She became the 15th figure skater to show the triple axel at the official international start. The student Eteri Tutberise literally threw this burden off her shoulders and continued to show her light and lyrical program, surprising the judges with every second. For one of the spins, Valieva even received only A's and the maximum possible allowance - the rarest case for all figure skating. For the entire rental, she earned 84.19 points and showed the second result in history, yielding only to the world record of Alena Kostornaya.

Alice Liu, due to the same complexity of content, could impose a fight on a Russian woman, but this turned out to be an overwhelming task for her.

On the triple axel, the judges counted her under-rotation, but on the flip they did not see a clear landing on the edge.

In addition, in terms of artistry, Liu was noticeably inferior to Valieva, so even with an impeccable performance of all the jumps, the American would be behind.

She really needs to change something in order to remain competitive, but so far she has only taken a step back.

The judges were not impressed by the premiere of the new rental, and the world record holder was left without high components, which she could always count on before. In this assessment, she lost even to the American Karen Chen, who cannot be attributed to the highest level skaters. The good news for Kostornaya's fans was that she nevertheless performed a triple axel, but the referees saw a slight under-rotation in him too. As a result, the student Tutberidze scored 75.58 points, that is, three points less than in Finland, where the axel was double.

Tuktamysheva finished the competition and could still move Valieva from the first place, as it was at the Finlandia Trophy.

She started her performance with an excellent triple axel and received a bigger bonus for it than her young rival.

But the judges looked at the non-jumping elements without the same enthusiasm.

Tuktamysheva was not left without fourth difficulty levels, but the bonuses were more modest, like the components.

All the first three remained with the Russians, but on Saturday everything will start all over again, when the quadruple jumps performed by Valieva and Liu will be used.