Dina Averina won gold in the individual all-around at the Rhythmic Gymnastics World Championships in Kitakyushu. She became the first four-time champion in history in this discipline, and also broke the record of Evgenia Kanaeva, scoring the 18th victory in the competition. Her sister Arina took third place, losing in the dispute for the silver to the Belarusian Alina Gornosko. 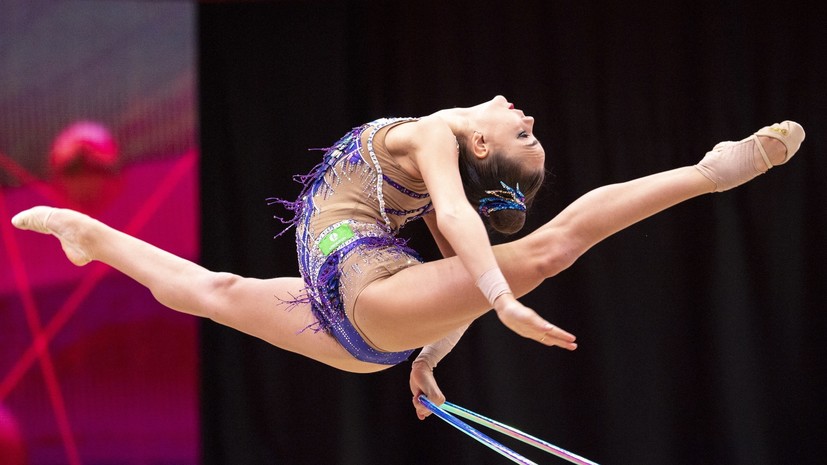 At the World Championships in Rhythmic Gymnastics in Kitakyushu, it is time to draw medals in the most important discipline - personal all-around.

Participants in the competition had already shown how they were able to work with individual subjects, but now they had to perform four programs at once in order to determine the absolutely best one.

The first two days of the competition clearly showed who deserves this title most of all.

Dina Averina excelled in three separate exercises, and in the final with the ribbon she became the silver medalist, losing only 0.05 points to the Belarusian Alina Gornosko.

Except for the Russian woman, no one else was able to win more than three medals of any value, including her older sister Arina, whose only serious mistake was performing with the hoop.

With this subject, Dina opened the all-around competition, and he also almost disobeyed his owner.

At the end of her program, the gymnast barely held the hoop, but still avoided a mistake that could greatly complicate the path to gold.

She immediately made a claim for victory, gaining 28,000 points - so much for a performance with a hoop that no one else in Kitakyushu had scored.

Arina got the ribbon as the first item.

In her strong program to the music "Time Forward", everything was almost perfect except for one turn that could have been done more clearly.

However, no one could handle this projectile better than the older Averina.

The score of 23.550 points until the end of the final remained the highest in this exercise.

But with the hoop, Arina again did not have a relationship.

Although in general her program was without visible disruptions, the judges gave an extremely low score of 24.150 points.

Averina lost about three points in difficulty relative to her main rivals and even scored very little in comparison with the unsuccessful final on the first day.

This gave Gornosko a chance to qualify for silver in the all-around, the Belarusian could only avoid catastrophic mistakes.

Dina, meanwhile, confidently walked towards the gold. 28,250 points for the ball performance and the absolutely fantastic 28,700 points for the club number created a huge reserve for the final program with the ribbon. Once Averina caught the projectile incorrectly, but this did not affect the final result. An estimate of 23.450 points was enough to take first place by a wide margin. The Russian woman scored a total of 108,400 points and surpassed both her result shown at the Tokyo Olympics and the performance of Lina Ashram from Israel, who then celebrated the victory.

Thus, Dina Averina became an 18-time world champion and set a competition record for the number of gold medals. The previous achievement belonged to Evgenia Kanaeva. In addition, the 23-year-old gymnast was the first in history to win four victories in the all-around - this, too, was not achieved by any of the legends of rhythmic gymnastics of the past. Whether this result will be fixed forever, Dina herself does not yet know - when asked about a possible retirement, she replied that she would still think about it.

“I am very glad that everything is over, because today it was difficult to go out and do four kinds. It was very stuffy in the hall, but everything was in the same conditions. Thank God, we coped and showed ourselves at the highest level. This was my fourth world championship, and I am very happy that I managed to confirm the title of the absolute world champion. You shouldn't get hung up on a record, you have to keep working. Nobody knows what will happen next. Now we are flying to have a rest, and then we will think, ”Sport24 quotes Dinu.

Arina Averina finished the competition with a bronze medal.

She did not compensate for the loss in the hoop relative to Gornosko in other forms.

In each of them, she showed better results than the Belarusian, although during the number with clubs she did not catch an object once.

But still, these were grains, which in total it was impossible to win back three points of lag.

This medal became the 16th for the senior Averina in her career.

The head coach of the Russians, Irina Viner-Usmanova, said after the competition that her players had mistakes, but in general he considers the results of the world championship to be successful.

She especially noted the fourth victory of Dina Averina in the all-around.

“We have not had such a result yet!

And, of course, gold in the team.

Therefore, the conversations of our opponents have become insignificant, although there are spots on the Sun - there have been mistakes, ”said the coach of RIA Novosti.

On Sunday, the planetary championship will end with two finals in group exercises, where Russian girls will again claim gold.

The most experienced gymnast in the team, Maria Tolkacheva, will have a chance to become a 12-time world champion.