Lack of will of Krasnodar, wastefulness of Ural and bad luck of Akhmat: seven RPL teams flew out of the Russian Cup

The group stage of the Russian Cup turned into a failure of the RPL teams. Only four representatives of the elite division of the eleven who started - CSKA, Dynamo, Arsenal and Nizhny Novgorod - managed to break into the 1/8 finals. The rest finished their performance ahead of schedule. Krasnodar suffered a crushing defeat against Kuban in the derby. Ufa, Rostov and Krylia Sovetov lost to their rivals with a total score of 0: 5. “Akhmat” lost to “Rotor” in the penalty shootout, and “Ural” conceded the decisive goal from KAMAZ in the 90th minute. 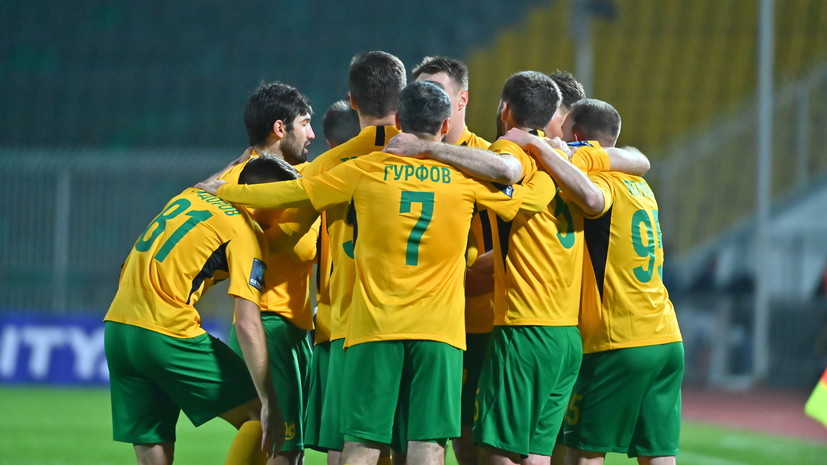 The current Russian Cup is not the easiest one for the representatives of the elite division.

However, two metropolitan giants - CSKA and Dynamo - on Tuesday did not experience any difficulties in reaching the 1/8 finals.

Both on the road won "clean" victories over teams from the FNL.

The blue and white did not leave any chances to the leader in the second strongest division, Orenburg.

Some believed that Sandro Schwartz, a few days before the most important match with Zenit, would provide the base with a rest and take understudies with him.

However, from the first minutes on the field of Gazovik stadium, many leaders appeared, and Anton Shunin, Daniil Fomin, Ivan Ordets, Denis Makarov and Nikola Moro remained on the bench.

Arsen Zakharyan and Konstantin Tyukavin also made it to the starting lineup.

It was a bunch of young footballers who made the first goal.

After filing a partner from the flank, the striker hit his head accurately and extended his streak in all tournaments to three meetings.

The hosts, despite an unsuccessful start, could well equalize the score in one of the counterattacks.

Only in the end did the favorite hit the opponent thanks to the precise punches of Moro and Roman Evgeniev.

But the army team went to the meeting with Metallurg in Lipetsk as a reserve team.

For example, Igor Akinfeev remained in Moscow at all, and 17-year-old Vladislav Torop took the place at the last line.

Also a memorable event for the fans was the first appearance at the base of Bruno Fuchs.

The center-back, acquired in August last year for € 8 million, spent only 12 minutes in the red and blue due to various injuries.

But the load on the defense of the guests turned out to be minimal, and they themselves, on the contrary, calmly hit the opponent's goal twice.

At the end of the first half, Emil Bohinen scored the debut goal for the team, and shortly before the final whistle, another legionnaire Kristian Bistrovic put an end to it.

In both cases, the partners were assisted by Fedor Chalov.

The only fly in the ointment for Alexei Berezutsky was Torop's injury, who injured his finger.

Instead, 19-year-old Danila Bokov had to be thrown into battle.

Thus, CSKA and Dynamo won four victories in the group stage and hit the rivals' goal 15 times, while never conceding a goal.

The unexpected outcome of the Krasnodar derby

But in the first Krasnodar derby in six years, a sensation broke out.

Krasnodar was considered a clear favorite, because the revived Kuban had just returned to the FNL and so far they look quite modest there.

In addition, an unexpected defeat from Leningradets in the first round forced the nominal hosts to open up and play to win with a two-goal difference.

The composition of the bulls did not promise them anything good either.

Viktor Goncharenko, although he rotated, threw many of the strongest into the battle, in particular Remy Cabella and Tonny de Villene.

But this evening the nominal guests were not like themselves.

They practically did not succeed in front, and real chaos reigned in defense.

Yes, and the desire and fighting spirit of "Kuban" was much more.

As a result, Maxim Lauk opened the scoring in the seventh minute in a counterattack.

Picking up the ball almost in the middle of the field, the midfielder from 40 meters sent it into the net over Stanislav Agkatsev, who had gone far out of the goal.

Finally, everything became clear at the beginning of the second half, when the referee Yevgeny Turbin showed Cabell's red card for disrupting the attack.

Moreover, at first he showed the Frenchman a yellow card, but, on reflection, changed his mind.

And soon Lauk scored a double and put an end to the derby.

Recreated only a few years ago, Kuban achieved its first major success in the Russian Cup.

And the southerners interrupted a ten-match unbeaten run in all tournaments, which had lasted since August.

Two other representatives of the elite also finished their performance ahead of schedule. Wings of the Soviets who returned to the elite had to beat the missing stars from the sky even in the Yenisei FNL. However, on a bumpy lawn in Krasnoyarsk, the last year's finalist was not lucky. The game was slowly heading towards a draw and a penalty shootout, when the guests were outnumbered after Dmitry Tsypchenko received the second yellow card. And four minutes later the hosts scored the winning goal, which brought them to the playoffs. Nikita Razdorskikh shot from the penalty line into the far corner, but Bogdan Ovsyannikov failed to rescue the team.

If the defeat of Igor Osinkin's charges can hardly be called fair, then Ufa lost away to Alania absolutely on the case. For most of the meeting, Vladikavkaz had an overwhelming advantage and only miraculously did not open an account before the break. Even the best scorer of the RPL of the current season, Hamid Agalarov, did not stand out among the Bashkortostanians. As a result, the hosts put the squeeze on the opponent in the second half. David Kobesov converted the penalty, and Batraz Khadartsev scored thanks to a gross mistake by the goalkeeper. In addition, Bojan Jokic received a red card.

“Rostov” and completely lost the chance to continue the fight even after the defeat from “The Seagull”, and therefore the trip to visit the “Torpedo” turned into a formality.

At the same time, the teams did not convert on penalties, and as part of the representative of the Premier League, they again did not go without removal.

Maxim Turishchev left the field ahead of schedule.

“The Seagull” became the only team from FNL-2 that made it to the 1/8 finals.

For the first time in history, the club from the South of Russia reached this stage of the cup.

Three fights at once within the last round of the group stage ended with a penalty shootout.

But only in one area did this lead to the participation of the RPL representative in the next round.

Arsenal were lucky in the confrontation with Veles.

The Tulyaks opened the scoring in the 33rd minute and kept the gained advantage for a long time.

The Muscovites were helped by the standard position 15 minutes before the end of normal time.

Artur Galoyan restored the status quo from a free kick.

But in the "lottery" the guests were still stronger.

One blow was parried by Yegor Shamov, and Daniil Lopatin hit the post himself.

Moreover, the Gunners' goalkeeper coped with Konstantin Kertanov's shot, but the referee asked to interrupt, as the goalkeeper left the line ahead of time.

The meeting of "Rotor" and "Akhmat" developed according to a similar scenario. Only here Grozny found themselves in a position of recoupment and managed to escape defeat only in the 80th minute thanks to the precise blow of Daniil Utkin. In the series in Volgograd, luck, on the contrary, turned away from the representative of the Premier League. Igor Obukhov parried the shot of Artyom Arkhipov, and Igor Konovalov struck in the rack.

It also came to a penalty in the Baltika - Khimki match.

However, by that time, the owner of the playoff ticket was already known.

In the first round, the Moscow Region team sensationally lost in the “lottery” to “Saransk”, and therefore they only needed a victory in regulation time.

It was not possible to achieve it.

The guests, who played the first game after the resignation of Igor Cherevchenko, did not manage to break through Evgeny Latyshonka.

The win in the penalty shootout was little consolation for them.

And the hosts reached the 1/8 finals for the second time in the last three seasons.

The "lottery" was also about the meeting between KAMAZ and Ural.

Both teams practically did not create dangerous moments, and goalkeepers Oleg Baklov and Yaroslav Godzyur remained unemployed for most of the match.

Only in the end did Yekaterinburg increase the pressure, as if anticipating a sad outcome, but failed to break through the hosts' goalkeeper.

And in the 90th minute, the team from Naberezhnye Chelny managed to score a goal that did not follow from the logic of the game.

Vladislav Ignatenko cleverly opened behind the defender and shot from an acute angle after a partner's pass.

Godzyur parried the blow at close range with his fingertips, but he landed in the area where Tamerlan Musaev ran.

The young guy, who entered the field nine minutes earlier, had no head hitting from a meter.

For him, this moment became historical, because earlier the 20-year-old striker scored exclusively in FNL-2.

Ural failed to confirm the status of a cup fighter.

"Bumblebees" twice in the last four years reached the final of the tournament, but this time they stopped much earlier.

And in general, RPL clubs this season unexpectedly failed in the group stage.

Only four teams managed to make it to the playoffs, and seven finished their performance.

A year ago, the situation was fundamentally different.

Then only Rubin, Rotor and Arsenal could not reach the 1/8 finals.