The designer explained the winter Olympic uniforms and equipment in detail: inspired by traditional Chinese landscape paintings and the core graphics of the Winter Olympics 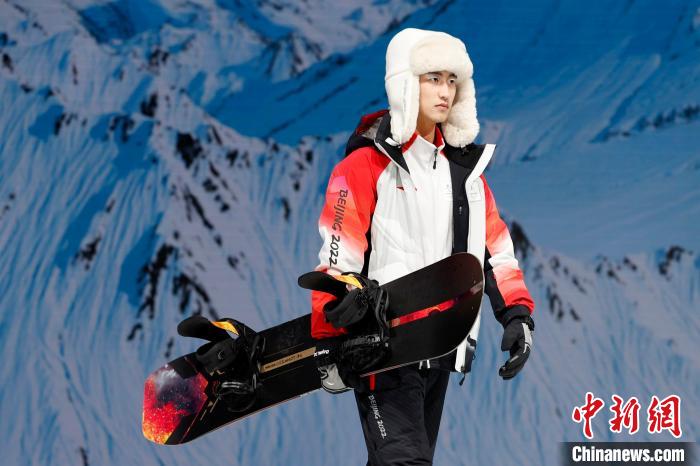 The Winter Olympics uniform conveys the spirit of the Olympic workers and participants with the overall image and temperament, which is a flowing landscape.

Reflect the natural landscape during the Winter Olympics

He Yang said that Chinese landscape painting is a representation of the magnificent mountains and rivers and beautiful natural scenery of the motherland, and it is also a typical symbol of Chinese humanistic spirit.

The love of mountains and rivers symbolizes the noble quality of a gentleman's personality. It is the embodiment of the philosophy and values ​​of the Chinese people that love nature and live in harmony with nature.

Since the Song Dynasty, ink and wash landscapes have become the highest embodiment of Chinese art and humanistic spirit.

The color matching of black, white, gray and red has the color intention of embellishing persimmon red in the snow and ice of Beijing in winter, which is beautiful and auspicious.

Black and red were also the colors of costumes for sacrificial rites in ancient China, and were the highest level of etiquette colors, expressing the etiquette and civilization of China as a large country in clothing.

The "Tianji Blue" in the volunteer uniforms originated from the Beijing Winter Olympics Color System. It is the color of the traditional Chinese ceramic treasure Ji blue glaze. The hair color is calm and has a jewel-like luster.

Blue is the color of ice and snow sports, lively and vivid, especially suitable for volunteer clothing.

"Ruixuebai" is also derived from the Beijing Winter Olympics color system. It is the harmonious color of uniforms, symbolizing the purity of the world covered in white snow.

Communicate the cultural characteristics of the host country

He Yang said that the design of the Winter Olympics uniform must first convey the cultural characteristics of the host country and be different from the previous uniforms.

The second is to consider both fashion and function.

To ensure that the visual elements are perfectly reflected in the uniform, everyone can dress generously and decently.

At the same time, uniforms should be unique, eye-catching, easy to identify, and avoid being submerged in a colorful environment.

In terms of design, the Winter Olympic uniform is a typical propositional design. According to specific thematic requirements, the elements of the uniform: style, color, material, pattern, craftsmanship, etc. have specific requirements and the scope of choice: style and fabric requirements It has basic functionality. The materials and craftsmanship must be light and warm. The patterns and colors must use the core graphics and standard colors of the Beijing 2022 Winter Olympics to ensure that the uniforms are consistent with the overall image of the Beijing Winter Olympics.

He Yang said that in terms of design, this means difficulty, but also a clearer direction. Innovation and breakthroughs within constraints are the special mission of the Winter Olympic uniforms.

A balance between stability and dynamics

Similar graphics and different colors are the basic means for uniforms to distinguish people of different identities and ensure visual identity.

Staff and technical officials distinguished by different landscape positions and color changes, dignified and atmospheric; volunteer clothing not only has landscape graphics, but also magnified the Great Wall elements in the core graphics, and the diagonal dynamic composition forms a continuous flow, The visual imagery in the orientation of jumping and entering.

He Yang mentioned that the Great Wall is a precious heritage of human history and a symbol of the wisdom and strength of the Chinese nation. It has an image of continuous and perseverance. Chinese and foreign cultures are integrated and exchanged here. The Great Wall can evoke the souls of hundreds of millions of Chinese people. The spiritual resonance of Chu is also recognized and admired by the whole world.

In terms of craftsmanship, the uniform graphic design fully considers the balance between maintaining the integrity of the graphic and the effectiveness of the wearing function. The balance between stability and dynamics is the key to uniform design.

Among them, the trousers and the hem of the jacket have the same color, which visually forms the perfect effect of elongating the legs, and plays the role of modifying and beautifying the proportion of the human body.

The functionality of the version takes into account both fashion and fashion, so that the uniform version can meet the wearing needs of people with different body characteristics. It is universal and more beautiful.

The pattern production of uniforms adopts pattern positioning design, which can ensure the perfection and uniqueness of the design and reduce the difficulty of production and processing.

He Yang said that participating in uniform design is a professional practice and a process of learning and diligence.

As a major national image design project, the Winter Olympics uniforms involve the needs of all parties and have extremely high political requirements.

Persistence is the most important quality for designers. Persist in professionalism, grasp policy direction, pursue perfection in the process of balancing the needs of all parties, maintain cultural confidence, and fully unify Chinese traditional culture, art and Olympic spirit. In the practice of uniform design, this is the mission and responsibility of Chinese designers.