The Birth of "Xue Ruyi" 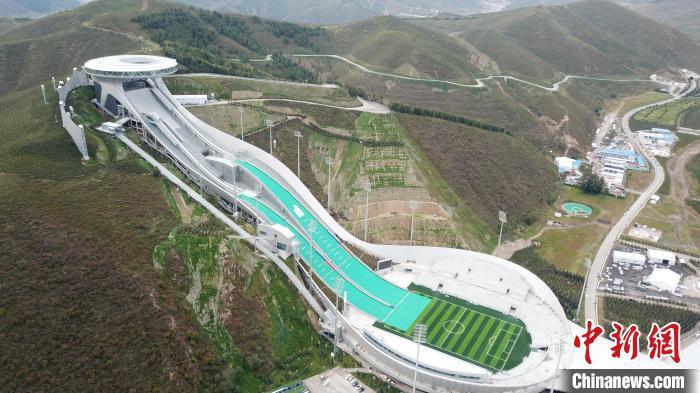 It is the first ski jumping venue in China that meets international standards. During the Beijing 2022 Winter Olympics, it will host ski jumping and Nordic biathlon 2 events and 8 minor events, resulting in 8 gold medals.

It is the National Ski Jumping Center of China known as "Xue Ruyi".

The "Snow Ruyi" full of Chinese elements will undoubtedly become the most recognizable "symbol" in Zhangjiakou.

Located in the Zhangjiakou competition area of ​​the Beijing Winter Olympics, the ancient poplar stadium complex in Chongli District, Zhangjiakou City, with dazzling lights at night, outlines the outline of the national ski jumping center, and perfectly blends with the curve of the traditional Chinese mascot "Ruyi".

Since the start of construction in May 2018, in just two and a half years, "Xue Ruyi" was completed.

"This site is especially suitable for ski jumping." Wang Jingxian, deputy director of the second venue construction department of the Beijing Winter Olympics Organizing Committee and manager of the facilities of the Guyangshu venue group, said that ski jumpers are especially taboo against cross winds when flying, and here The mountain in the country is in the shape of a bowl. Including this field in the valley can attenuate most of the wind that interferes with the athletes.

Zhang Li, the chief design officer of the Zhangjiakou competition area of ​​the Beijing 2022 Winter Olympics and dean of the School of Architecture of Tsinghua University, once told the media that they can find this site thanks to the team of the State Sports General Administration, who are looking for such mountains around 200 kilometers in Beijing.

"I have seen more than 200 schemes for the design of'Snow Ruyi', which contain various traditional Chinese cultural elements such as lanterns, the Great Wall, and Bogu frame." said Wang Hao, the relevant person in charge of the Tsinghua University design team, transforming from Chinese cultural elements Sports architecture is very difficult, and the image of Ruyi is just close to the platform, becoming the final choice.

"Among the 4 competition venues in Zhangjiakou,'Xue Ruyi' has the largest amount of engineering and the most technical difficulty." Wang Jingxian said.

According to Wang Jingxian, the construction of "Xue Ruyi" has undergone a major adjustment.

In June 2018, relevant experts from the International Snow Federation visited the site. At that time, "Snow Ruyi" was still 30°south east. The experts decided to adjust the direction of "Snow Ruyi" to now face the national biathlon after inspecting the terrain. The direction of the valley where the center is located.

This will allow the athletes to have a very pleasant flying experience during the flight, with a wider field of vision, and to see the remains of the Great Wall in the distance.

The "Snow Ruyi" chute is framed above the mountain, with a maximum height of 30 meters and a slope of up to 37 degrees. The construction is facing difficulties in vertical and horizontal transportation of materials.

Although efficiency was affected, they worked round-the-clock shifts and eventually made the progress catch up with expectations.

In Wang Jingxian’s view, the most difficult construction of "Xue Ruyi" is its "handle head" summit club-the front cantilever height is 37.5 meters, the outer diameter is 78 meters, the inner diameter is 40 meters, and more than 1,600 tons of steel are used, but the working surface Very small.

In order to fully present this top design to the world, the builders have confirmed through many studies and discussions that 39 steel trusses are used as temporary supports for construction. The pre-processing of the steel is also completed below, and then hoisting and welding are carried out.

In June 2020, the allowable deviation of the "Xue Ruyi" steel structure after unloading is 5cm, but the actual error is less than 2cm.

"The most advanced ski jumping venue in the world"

In the design and construction of "Xue Ruyi", many top experts in the world provided a lot of guidance.

The slope curve of the jumping platform is personally designed by Hans-Martin Renn, Chairman of the International Snow Federation’s Jumping Platform Construction Committee, and designed according to the latest international standards; the slide assist equipment comes from Slovenia’s MANA company, the head of the company is an expert in the assist slide design field.

In addition, Finnish engineers and Chinese colleagues were responsible for the concrete pouring of the area, and the control curve met the requirements of the competition.

During the Winter Olympics, "Snow Ruyi" will host 10 games, of which 6 will be held at night, which requires higher lighting.

For this reason, after calculation by a professional sports lighting company, "Xue Ruyi" has built 15 large lamp posts, which can reach an illuminance of 1,600 lux.

During the game, the "bright as day" light will meet the needs of the game and the event broadcast.

In addition, during the event, the "Xue Ruyi" variable angle oblique elevator was also put into use.

It is specially designed for the special shape of "Snow Ruyi" and the use of competitions. It is currently the world's fastest variable-slope sloping elevator with a total length of 259 meters and a speed of 2.5 meters per second. It is a common variable-sloping sloping elevator. 5 times the speed.

During the game, the athletes' traffic conversion will be quickly realized.

"In terms of facilities and equipment,'Xue Ruyi' is currently the most advanced ski jumping venue in the world, which can guarantee good results for athletes." Wang Jingxian said.

Orderly planning for post-Olympic use

"As part of sustainable development, the use of venues after the Winter Olympics is an important part of the initial stage of the construction of "Xue Ruyi"." Wang Jingxian said.

According to reports, ski jumping is a very challenging sport, and it is unlikely that the general public will directly use the Olympic venues to experience this sport.

However, as one of the landmark venues of the Beijing Winter Olympics, "Snow Ruyi" will become a local landmark and integrate into the surrounding environment, providing people with sports, leisure and diversified tourism functions.

After the completion of "Xue Ruyi", in addition to continuing to hold world high-level ski jumping competitions in the future, concerts and other entertainment activities can be held in summer; the stairs on both sides of the track can be climbed, which can be developed into extreme tourism projects after the competition; Organize conferences and exhibitions, and receive tourism and sightseeing.

Wang Jingxian believes that fully tapping the value of "Snow Ruyi" in the post-Olympic era is in line with the Beijing Winter Olympics' concept of "green, shared, open, and clean".

In particular, driving consumption through the sports service industry and driving economic growth in a greener way is an important issue in itself.