Dina Averina began her performance at the Rhythmic Gymnastics World Championships with two victories. She became the best in the finals of exercises with a hoop and a ball. For the Russian athlete, these gold medals became the 14th and 15th in her career. In terms of the number of personal awards of the highest dignity, she became the most titled athlete on the planet, surpassing her compatriot Evgenia Kanaeva. Her twin sister Arina won silver. 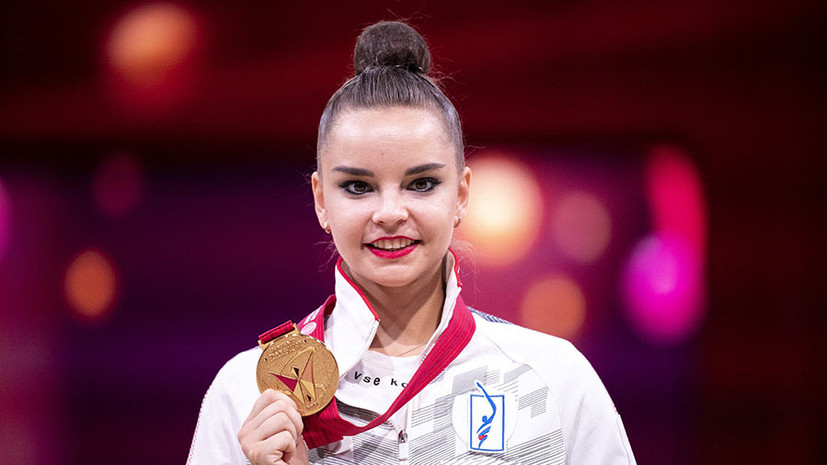 Unlike the World Championships in artistic gymnastics, where first the participants compete for medals in the all-around, and then in individual exercises, the opposite scheme is used in artistic competitions - the athletes first warm up with various objects, and then compete in the most prestigious form. On the first day of the world championship in Japanese Kitakyushu, the girls had to demonstrate how they handle the hoop and the ball.

After the Olympic champion Lina Ashram from Israel did not return to the Land of the Rising Sun, it might seem that the Russian women Dina and Arina Averin had no rivals. However, it was impossible to forget at least about the Belarusian Alina Gornosko. It was she who beat Arina in Tokyo in a dispute for a bronze medal, and even earlier, she was ahead of both sisters at various European championships. And all the other participants in the Olympic final, with the exception of another Israeli woman Nicole Zelikman, continued the season and came to the World Championship.

The fact that Gornosko will try to give a fight to the Russian women this time was shown by the first results in qualification. So, in the exercise with the hoop, the Belarusian woman turned out to be higher than Arina Averina, and in terms of the complexity of the program - one of the important evaluation criteria, she was better than both sisters (5.4 versus 5.1 and 5.0). True, the judges did not praise the work with the ball so highly. With this subject, the Russians showed the best results in the selection, despite the fact that Dina was given a fair penalty for playing too long.

At the end of the first day of qualification, the Averina sisters seized the lead and secured participation in the evening finals, claiming four medals in total.

However, this ambitious plan was not implemented.

In the final of exercises with a hoop, Arina Averina performed under the second number and immediately made a gross mistake - she could not catch the object and picked it up from the floor.

The Russian woman tried to forget about this accident and brought her incredibly dynamic performance to the end.

The judges rightly did not ignore the loss of the object.

Arina was deducted more point from the assessment for difficulty, despite the fact that she was already inferior in body gymnastics to most of the participants in the finals.

The score for the execution also went “under the knife”.

As a result, the eldest of the twin sisters received 24,950 points, which did not allow her to get around even the Italian Milena Baldassarri, who opened the final.

The referees were also picky about Gornosko.

The Belarusian athlete once almost stepped outside the carpet, and although there was still no spade, she received very modest marks.

With 25.950 points, she lost almost one and a half points to her qualifying result.

However, she was still in first place when Dina Averina stepped onto the carpet.

The Russian woman still managed to amaze the judges with her program.

Excellent transitions and the most difficult elements allowed her to surpass Gornosko by an order of magnitude in the assessment for complexity, so it was no longer too important how picky the arbiters were in execution.

Nevertheless, there, too, the Belarusian remained far behind the Russian.

If we take into account only personal awards, then Dina had one more victory to surpass the two-time Olympic champion and become the most titled gymnast in history.

This could be done in the next final of the exercises with the ball.

The younger Averina did not miss the chance.

She performed flawlessly and to the limit.

Suffice it to say that sometimes she caught a ball falling from a great height behind her back only with her hands, without helping herself with her head, which no one else does.

The final result was stunning - the Russian gymnast scored 29.125 points.

Nobody could get the same high amount, close to the maximum, that evening.

The rest of the girls had to fight for silver, and this dispute was won by Arina Averina.

She was the last to perform in the finals, having already let go of the unpleasant situation that happened in the exercises with the hoop.

The judges rated her program a little worse compared to the qualifications, but still put the Russian woman higher than Gornosko.

With a score of 27.675 points, Arina took second place and won her 12th planetary championship medal.

Interestingly, since 2010, Russian women have taken the first two places in this discipline.

On Friday, the gymnasts will pick up clubs and ribbons.

They will again perform first in qualification and sum up the selection results in the all-around, and in the evening they will compete for two more sets of medals.

Dina Averina has two more golds to win in order to finally surpass Kanaeva and become the most titled participant in the Rhythmic Gymnastics World Championships.